The first joke in Power Rangers is about jacking off a cow.

That’s probably not true. The first joke is Zordon (played by Bryan Cranston) lying in a field, damaged and on his last breath, spitting out the name “Rita,” his American accent suddenly thick amid a series of alien syllables. It’s the first of a series of moments in Power Rangers where the cartoonish underbelly shows through the grit, and it’s certainly not the last.

Power Rangers is a cartoon rendered in the dull shades of grey and brown that have come to represent the modern blockbuster, a disorder we could probably lay at the feet of Zack Snyder. Fights are chrome plated and somehow dark, despite the fact that the cast of teenagers are running around in “dino cars.”

The color range seems unimportant, but it’s a part of the problem that the movie has in discerning who exactly its audience is. The grey brown speaks to a darker superhero flick, but the text and the characterizations are as simplistic as they come.

How do we know this girl is a rebel? Because she does mountaintop yoga while listening to metal music. This girl leaving behind her roots? Guess she’s going to cut off all her hair into an attractive bob in the bathroom. Our quarterback is not that boy anymore, so I guess he’s going to break the figure off the top of his trophy. Every emotion and moment is telegraphed so much that you expect a laugh track at the jokes. 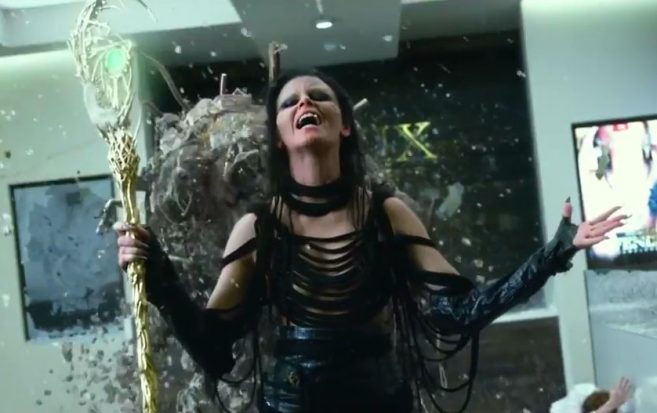 The writing is bizarre, which leads to an onscreen unevenness in performances. On the one hand you have Rita Repulsa (Elizabeth Banks) practically cavorting across the screen. She has fallen out of a 1980’s karate film that I desperately want to track down. As Rita Repulsa, purring out the words “Krispy Kreme” (because it naturally features heavily in the plot), she’s giving me Frank Langella as Skeletor in Masters of the Universe and it’s fantastic. On the other hand you have a moment where Zach Taylor (Ludi Lin) explains how his mom is dying and he can’t sleep at night because he’s worried he’ll wake up to find her dead.

The movie is a mess of motivations and plot points, to the point where it feels like it had five writers instead of the one that is credited. The “coming together as a team” moment? Every movie has one, but Power Rangers has like four of them. At one point, the characters say they would die for each other, but the plot hasn’t earned that sense of loyalty. It just keeps having them stand together in a circle saying serious things, but doesn’t give us real character building. There’s no sense of jeopardy when they face off against death for the fifth time because the plot has established them as invincible. It’s not like Rita’s giant dragon made of gold is going to change that invincibility.

The movie seems unclear who is in the right. Early on in the film, Jason Scott (Dacre Montgomery) has it out with his father. It’s one of those typical “you don’t understand me, dad” fights, except that the thing that the dad doesn’t understand is that his son broke into a school, left a cow and then got into a pretty significant car wreck. But in the end, it’s Jason who gets vindicated when he saves his dad from a car wreck while dressed as the Red Ranger. Jason is “right” in terms of the movie, even though his dad is actually correct. What Jason did was reckless, stupid and never properly explained in the film. 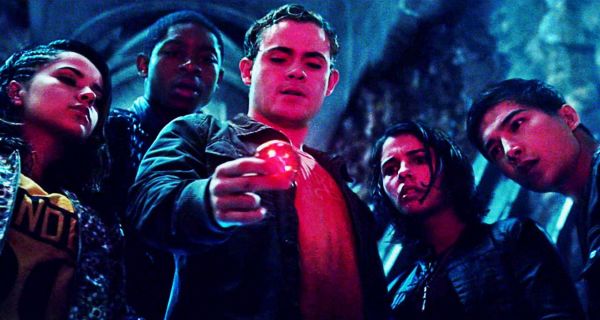 More seriously, the situation that has Kimberly Hart (Naomi Scott) at odds with her classmates is that she shared a private image (it’s probably a nude picture though it isn’t outright stated as such) of one girl to a boy they both liked, saying “is this the kind of girl you take home to mom.” When she says she’s an awful person, it’s tempting to agree with her. You really should agree with her. Normally this would be the point where she becomes a “better” person, finds a way to undo what she’s done or make it right. Instead the movie treats her victim like a bully. In the climactic battle sequence, it’s the other girls car which is destroyed in the fallout. The girls, who again were victimized by the Pink Ranger, are treated the same as the bullies that beat up and harass Billy. Power Rangers doesn’t seem to see the difference.

The movie is fine showing one of its leads as a corpse but can’t manage to come out and say that the Yellow Ranger is queer. The conversation, the same one where Zach talks about dying mom, is a masterclass in avoiding the topic. Her sexuality might as well be “shrug” and it’s more frustrating because it is right there. It’s on the tip of her tongue but we don’t get the validation of hearing it, because she doesn’t like labels.

The Lowdown on Mobile Roulette

Samurai Jack is Among the Best Shows Airing