Samurai Jack was always something of a different breed. While its art style was similar to creator Genndy Tartakovsky’s Dexter’s Laboratory and The Powerpuff Girls, it’s tone couldn’t be further from either of those shows. It was a mature show for mature cartoon viewers. Kids could watch it, sure, but it was a cartoon for the Kubrick and Kurosawa set. Now in its revived fifth season, Samurai Jack had doubled down to become an even greater show than it ever was.

Samurai Jack falls squarely in the “never given a proper ending” category of shows that’s usually dominated by Twin Peaks. Jack never got back to the past. He never defeated Aku. Instead, for 50 years he’s been an unaging wanderer haunted by his demons.

Now Jack’s getting an ending. His quest will end, one way or another. Or so PR tell us.

But the beautiful thing isn’t that Jack’s back. It’s that Genndy Tartakovsky isn’t holding back anymore. The revived Samurai Jack isn’t afraid to show us the blood streaming from Jack’s wounds. It grapples with Jack’s survivor’s guilt. And Jack is forced to take a human life, something he’s never done before.

In all this time neither Jack nor Aku have gotten any closer to destroying one another. Instead, they’ve only grown closer to destroying themselves. Jack is constantly tormented by a shadowy mounted figure, his mind’s own self-doubt, and the imposing, Christ-like, Emperor that is his father. Specters all.

Aku has become filled with a kind of malaise. Nothing he’s done has come close to killing Jack, the one person he knows can defeat him. The struggle has gone on long enough that Aku has shifted from vaingloriously hunting his foe to becoming his own therapist as he grapples with the possibility Jack might never die. 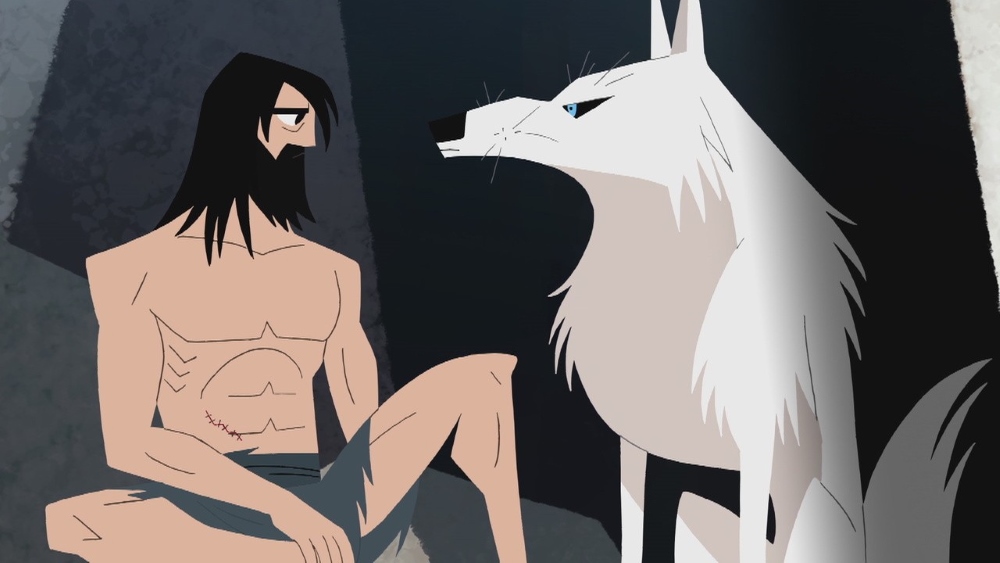 Even better still is how this is communicated through means other than dialogue. Instead, the visual storytelling does most of the heavy lifting. For example, in episode XCIII Tartakovsky intercuts scenes of a wolf being beaten and bloodied, much like Jack is, nearly wordlessly. Then, in episode XCIV they meet and aid each other, again, wordlessly. Tartakovsky beckons you to watch if only because no one says much.

In fact, characters don’t have conversations as much as they speak in mantras or aphorisms. Dialogue does less to advance the plot than it does to offer access to a character’s interiority. Both Jack and Aku speak mainly to themselves. The Daughters of Aku only speak to remind the viewer they’ve never known a life that was not preparing to fight Jack. Even the ghost of Jack’s father only speaks to remind both the viewer and Jack of Jack’s failure.

Though the 2017 edition of Samurai Jack has the aura of violent show that exists to please those asking for more “mature properties” it couldn’t be further from it. Tartakovsky’s work has always been a step smarter than the competition and now more than ever he’s proving that “mature” doesn’t mean only mean blood, sex and cussing. His changing aspect ratios along merit analysis, his usage of color to obscure and reveal rivals Kieslowki’s Three Colors trilogy. For Samurai Jack, “mature” means a solid concept cinematically executed to its fullest. Though it is a little bloody along the way.

Westworld is Full of Monsters, They’re the Guests