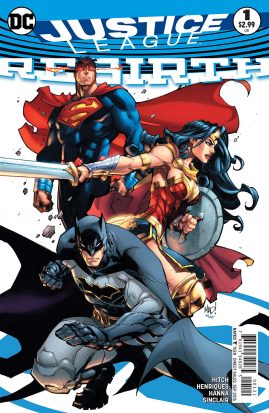 Steve Orlando and Ivan Reis are taking a more human approach to the Justice League of America. It’s a team of fighters and aside from intergalactic bounty hunter, Lobo, it’s the most human league in a long time. The new team consists of Batman, Black Canary, Vixen, Killer Frost, the Atom, the Ray and the aforementioned Lobo.  Their purpose? Batman says something is coming and he needs a team of human superheroes to inspire the world.

Justice League of America Rebirth #1 is a set up issue. It introduces the new team but the threat they face is rather nebulous. Justice League: The Darkseid War and DC Universe: Rebirth gave Batman a look at something threatening the DCU and he wants to be prepared. That’s all we get this issue, but if Steve Orlando’s work on Midnighter & Apollo and Supergirl is any indication, the Justice League of America is going to be a helluva lot of fun. He and Ivan Reis build a cast I want to read more about.

Reis, inkers Joe Prado and Oclair Albert and colorist Marcelo Maiolo put together a gorgeous comic. The fight between Killer Frost and Black Canary is dynamic. The Atom’s recruitment of the Ray is damn fun. Their inventive visualization of Vixen’s powers is perfect. Again, this book is a set up, but I want more.  Since the team is facing off against the Rebirth era’s Extremists next issue, I think this book is going to pick up speed.

Justice League of America Rebirth #1 is a fun comic. Orlando and Reis deliver a fun introduction to their team and the beginning of a mission statement. They have the team dynamic down (am I the only one shocked that Lobo sort of listens to Batman?) and I can’t wait to see this JLA get into some trouble!