At the conclusion of its first arc, The X-Files: Season 10 has reestablished Mulder and Scully as FBI agents, introduced its new overriding mystery and returned the show to its enigmatic, often frustrating roots. 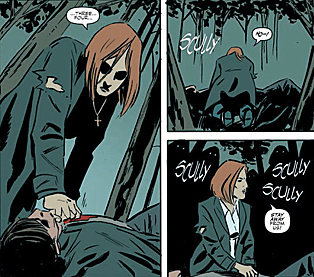 Joe Harris really doesn’t provide a strong conclusion so much as a guidepost to the future. The comic fails to settle many of the conflicts introduced early on in the series, and several threads are left dangling in the wind – but I’m not complaining. Harris has checked off some major plot points in the first five issues and has structured the comic nicely around a subject familiar to The X-Files.

Fans of the show should feel rewarded. Harris makes no apologies for his mythos-heavy delivery, and the final page of the comic is a head scratcher as well as a fantastic hook for the next arc. Unfortunately, parts of the comic feel rushed due to their handling of the action, and the “death” and resurrection of Mulder is not given a satisfactory explanation. But this may play a larger role in the comic, so I hesitate to complain too much.

On the plus side, Harris nails the Mulder/Scully relationship, gives Dana back the fire and tenacity that Gillian Anderson brought to the character and leaves enough questions unanswered to make sure readers return each month to find out just what the hell happened.

Additionally, Michael Walsh’s art has grown on me. The simplicity of his panel design makes the action-heavy moments easier to digest, even if character faces suffer as a result. Jordie Bellaire’s colors, while muted, give a sense of realism to the visuals, particularly when combined with Walsh’s shading and shadows. This is especially evident in the final pages.

Count me in on whatever The X-Files is selling. Seeing Mulder and Scully back in their element is enough to give me goose bumps, especially with all the twists Harris has thrown at us. Even if we’ll never see this series on the television screen, it’s enough to sate the whetted appetite of any X-Files fan, including this reviewer. 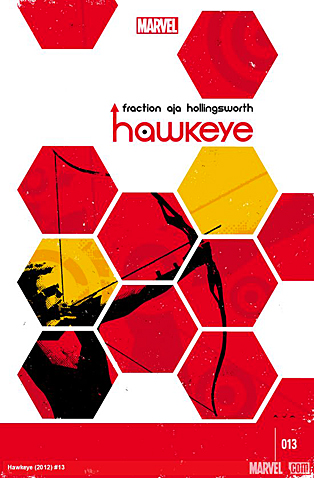 Matt Fraction is too damn good for his own damn good.

Filling in some of the gaps in Clint Barton’s timeline, Fraction shows us what happens when Clint learns of the death of his roof-mate, Grills, and the odd and emotional impact it has on him amidst the rest of his daily struggles.

Fraction still finds a way to pepper the comic with light humor, but the issue is more heavy handed than the others, particularly as we see Clint try to deal with his grief over the loss of his friend. One scene in particular, in which Clint tells the man’s father in person, is powerfully delivered in its simplicity and effectiveness.

For the majority of the issue, Clint just looks defeated. David Aja, who’s art is brilliant from start to finish, always draws Clint bruised, slouched or disheveled. Nothing about him looks complete, and this is really how Fraction and Aja work together as a team to deliver a comic that is unadorned but wholly compelling. At no point does Clint seem in charge of his life, despite his status as an Avenger, and the arrival of his equally disheveled brother is a bit of a relief, especially for those of us who know the importance of siblings.

Matt Fraction continues his entertaining run on Hawkeye with another great entry. At some point, you want to say that there’s no way a series can keep up this level of excellence for long.

But Hawkeye proves this theory wrong over and over again. And besides Mark Waid’s Daredevil, I can’t name another book that is this good on a consistent basis. If you’re not reading Hawkeye, do yourself a favor and buy the trades. You’re only hurting yourself by missing out. 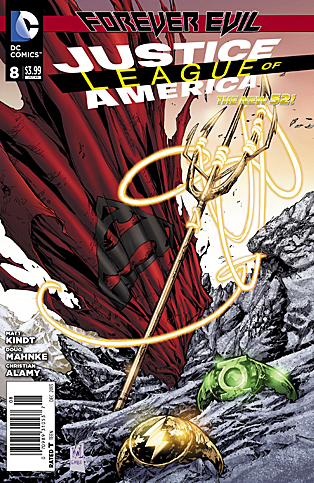 Bannen’s Book of the Week: The real reason I’d label this as a “book of the week” is how much it took me by surprise. I expected, like many event tie-ins, a soft entry that didn’t affect the characters in any way, nor do anything to advance the plot.

Providing necessary background, Justice League of America #8 shows us just what has happened to the heroes of the DC Universe. Matt Kindt is on par with Geoff Johns in his ability to craft a mystery. He takes us through the tortured existence of the Justice League, giving a clearer indication of their whereabouts, but no real resolution on their fates.

Focusing on Stargirl and Martian Manhunter, Kindt leads readers through a prison of the mind, a construct that affects the psyche of each of the major characters. Kindt excels at showing the psychological toll that this prison takes on the minds of its inmates. These individual cells exploit the weaknesses of each character, but in a way that humanizes them, and makes them frail and sad.

And really, Kindt owes a lot of his success in this issue to Doug Mahnke. Mahnke brings the emotions of the characters to life, particularly their weariness, sadness and insanity. Seeing the pained look on Diana’s face is almost too much to bear, as is the defeated way Simon Baz addresses Martian Manhunter in his attempt to reconcile his personal hell.

The ending of the book is my only complaint, as Stargirl’s exit of the prison is a bit weak. I understand that Kindt wants to tie the series into Forever Evil as well as give readers an idea of where his heroes are imprisoned, but the resolution doesn’t mesh well with the hopelessness of the introduction.

The real star of Justice League of America is Doug Mahnke. His illustrations are sharp and detailed, and his close-ups are works of art. If you need any more evidence of Mahnke’s skill, check out the opening splash page. Couple this with Gabe Eltaeb and Hi-Fi’s colors, and you have one gorgeous book.

We’re not much closer to understanding what’s going on in Forever Evil, but at least the mystery of the Justice League’s disappearance is solved. How this plays into the larger story is still unclear, but what is clear is that someone knows the way to get to the heroes is to exploit their compassion, as well as their inner desires. And how or when we find this out is important.