It would not be wholly accurate to say Happiness has sped up. Certainly, more happens in this third volume than in the prior two combined, and what does happen seems more significant, or at least louder. Okazaki and Yuuki have survived Saku’s mauling, but the attack has left the latter in the midst of his own vampiric transformation. While Okazaki decides to abandon his family and Gosho to seek out Nora, the woman who transformed him, for assistance, Yuuki succumbs to insatiable blood lust and consumes his mother. Transformed, he seeks out Okazaki and saves him from an ambush staged by a group of men posing as police officers but who, it seems, are bankrolled by forces far more sinister.

But the truth is that if Happiness remains interesting at all it is because the series has miraculously found a way to preserve something of the same slow, steady rhythm that made it such an alluring title from the first. These plot developments are not unwelcome – not necessarily – but they are so intrusive they risk derailing everything that has separated author Shuzo Oshimi’s work from an overcrowded field. The revelation that Gosho supports Okazaki because he resembles her brother plays well enough into the squirmy psychosexual subtext the series has traded so well in until now, but her open declaration of the same feels like a major misstep. Unspoken, suggested only in the lingering gaze she spares a picture of her departed brother and a juxtaposed panel of Okazaki’s face, this might have played as a well-observed and revealing piece of subtext, betrayed an element of Gosho’s character even she was not fully aware of. Voiced, it only adds an element of melodrama that seems wholly out of place. 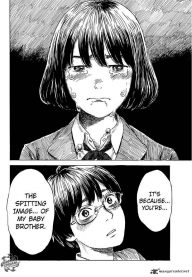 Like the introduction of a gang of mysterious thugs who bind, gag and attempt to kidnap Okazaki, it tries too hard to justify a perfectly human story by lending it the significance of plot, of importance. Only, such an over-determined story undermines the quiet, interpersonal shocks that have regularly allowed Oshimi to lend the imagery in his work that deeper layer of psychological dissonance that makes them so disturbing. Not that these have departed entirely – or even significantly – with this volume. As said, there are moments at work here that maintain something of that earlier rhythm and spirit that made the first two volumes such a treat.

If the psycho-sexual undercurrents that have long lent this series its true power as a horror story have escalated in direct correlation with the plot, they at least have remained mostly interesting. There was nothing in Okazaki’s hungry lust to suggest the ugly Oedipal violence of Yuuki’s attack on his mother, and yet the scene strikes with all the force of genuine revelation. Family has clearly been a concern in Happiness since the beginning, as has the unpredictable violence of sexual impulse that marks all vampire myth; contextualizing and then literalizing it this way provides the kind of revealing alternative angle on a tired subject that only daring art ventures. Those scenes that find Nora feeding her surrogate son Okazaki blood by way of kissing strike with a similarly upsetting power. Oshimi has rarely shied away from analyzing what is most clearly unsettling about sexuality; now, he seems eager to explore those elements of it we obscured out of fear. 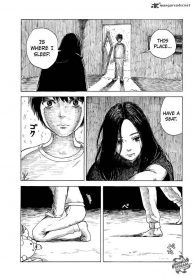 He seems even more devoted to pushing his skills as a draftsman. It is almost miraculous that in the space of a single volume his sense of lighting and his control of shade should have advanced from their already considerably levels. There are spreads here so beautiful they could stand alone in a gallery. Similarly, his abilities as a caricaturist have advanced in no unsubtle way: the scenes of Yuuki’s transformation – his body stretched like taffy, his skin like melting wax, face contorted in an anguish so exaggerated it might be comical if it were not so pained – rival even some of Junji Ito’s or Kazuo Umezu’s best work. If there is no guarantee that the plot will not falter and so spoil the psychological sensitivities that make this series such a treasure, at least there is no concern of the art’s degradation. And that may be enough.