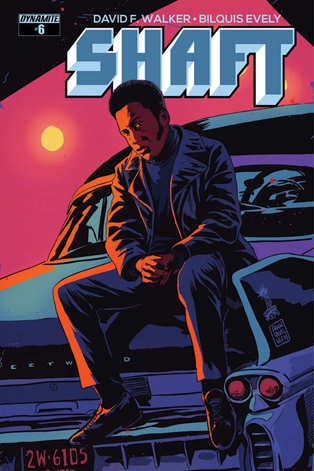 Our Shaft mini series wraps up in fine form with issue #6.  It would be easy to say that John Shaft saves the day and gets vengeance for Arletha Havens’ death, but the emotional toll of Shaft’s decisions chip away any remnants of optimism he may have had for the world.  Issue #6 isn’t cover-to-cover action, but the action throughout this Shaft series takes a back seat to tone, character development and tension.

Throughout the whole mini-series, Shaft the man is emotional, angry and volatile.  He’s not yet the cool, shit talkin’ bad ass ladies man the film series would turn him into.  Prequel Shaft is quicker to blows and quicker to take a life than the film Shaft.  If you have trouble seeing how movie Shaft grows from Walker and Evely’s prequel version, I would back you up.  The Shaft of the pages is more real than his big screen counterpart.

Character development is Walker and Evely’s strongest suit, and deliver with each issue.  Sure, movie Shaft is a quotable blast, but comic book Shaft’s seething and brooding gives him more humanity.

I’m hoping to see other entries in the prequel Shaft world, with the request that Walker and Evely are always at the helm.  The short, tight mini series form maximizes impact, and there is plenty of back story for a few more rounds. 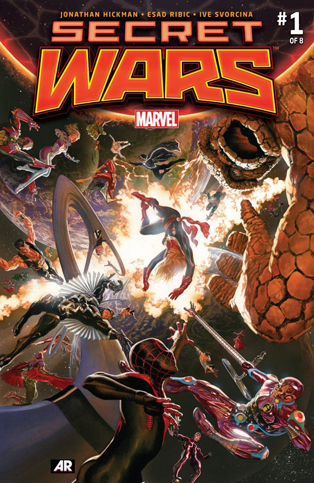 I am out of the game. On the one hand I’m proud of myself for avoiding the convoluted main narrative of the Marvel Universe for so long, saving myself hundreds of dollars. On the other hand after reading Secret Wars #1 for this review I’ve never been so confused. Lots of stuff happens, including things dying, exploding and crashing. Lots of major characters make grand gestures, some who I’m familiar with and some who I recognize vaguely from my limited forays into the Ultimate Universe. By the end of the issue the game board has been upended, and now it’s time for it to be reassembled in a new way.

At least that’s what I assume?

This issue features a lot of New York City being destroyed, courtesy of artist Esad Ribic and writer Jonathan Hickman , a man who loves to destroy the status quo, continuity and history itself in his stories. Unlike Manhattan Projects , his wonderfully batshit series published by Image Comics, this is too much of a mess of events to really be fun at the moment.

Esad Ribic’s art has an appropriate epic scope to it, with a veil of cloudy dreaminess to bring an appropriate surreal quality to this tale. With different variations of known characters working as cogs in the storytelling machine this issue out of context of the overall story feels like a nightmare as seen through bluish clouds. Since I didn’t read any of the comics leading up to this it only makes it that much more of a series of familiar things being processed by my brain in an unfamiliar sequence.

There are moments, sure. Doom talking down God, the Punisher interrupting a super villain party, a Hulk Fastball Special courtesy of Colossus, but these are all a page each or a single panel. As a whole, we know this is all leading to a house-cleaning end game, a showdown on Battleworld that will basically merge all the different Marvel dimensions and universes similar to what Crisis on Infinite Earths did for DC Comics 30 years ago. Those changes stuck for at least fifteen years, so I guess we should be prepared for some real craziness to go down over the course of this crossover series, changes that will then ultimately be corrected in a decade or less. I’m curious to see how these changes will play out and if it will be done well, but I would be lying if I said that I really care. If anything I feel slightly fatigued, overly pessimistic and cautious about going along for this ride.

At the end of the day we know what the bottom line is of any of these crossover events, and that’s big sales. There’s also the elephant in the room that is Marvel trying to sync up their comics more with their cinematic universe. The Fantastic Four just recently ended their run, and the X-Men are also seeing major changes that I’m sure are possibly going to fly in the face of the future cinematic developments over at Fox. I won’t be surprised if a number of key players from those series die epic deaths. One may have already in this issue. It’s hard to say though, because also in this issue Rocket Raccoon suffers a pretty major hole in his chest, and he’s got at least two more movies he’s contracted to be in so it would be pretty silly for Marvel to kill him off.

As much as I feel Marvel has tried to keep their comic book world separate from their cinematic world it’s pretty obvious that this series is going to serve as a way to make things merge and resemble each other more. Having just watched Avengers: Age of Ultron before writing this I saw what were the messy beginnings of a larger Marvel cinematic universe, and in many ways I feel that Secret Wars will be the messy beginnings of a new status quo for Marvel Comics. At best, I can only hope that it will be fun, but I don’t know for how much longer I can take this ride. 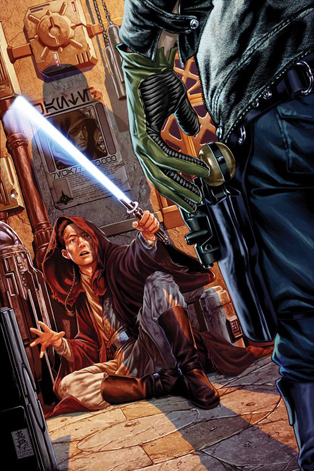 When it comes to Star Wars, I’m kinda like the Stormtrooper Ben Kenobi chats with in front of Mos Eisley – I’m weak minded. I fell for all The Phantom Menace review proofing. The site of Christopher Lee with a lightsaber sold me on Attack of the Clones. The promise of Anakin Skywalker using his powers for evil got me excited for Revenge of the Sith. I should have known after Episode I, but like I said, I’m an easy mark.

Thankfully, the last few years restored my love of Star Wars. Dark Horse’s 2014 Star Wars, Rebel Heist and Star Wars: Legacy comics were badass! The Clone Wars animated series served as a better prequel to the Star Wars Trilogy than the prequel movies did. Marvel’s current crop of Star Wars comics is pretty great too, and that includes the Star Wars: Rebels spin off, Kanan, the Last Padawan.

The first issue introduced readers to Caleb Dume (the boy who will become Kanan) and his Jedi instructor, Master Billaba. He’s an inquisitive padawan and Billaba is a skilled, if a little off-beat (she publicly opposed the Jedi taking military ranks during the war, but acquiesced to the Council’s decree). Between the first two issues, Weisman and Larraz do a fantastic job of building their relationship. It’s easy to see why Kanan speaks so reverently of her on Rebels – she’s the perfect teacher for him. She’s loyal to the Jedi, but always willing to ask questions.

Issue 2 takes place during the Galactic Republic’s waning minutes – the dawn of Order 66.

Order 66 is one of the darkest moments in Star Wars canon. In it, the light side of the Force is nearly snuffed out by the Jedi’s trusted allies, the Clone Troopers. Kanan # 2 is action packed as Billaba and Caleb’s clone allies receive their orders on page one and the first third of the issue is devoted to Master Billaba’s final lesson – to let form inspire action.

Master Billaba fights the Clones valiantly as she buys time for Caleb to escape. Later, Calem runs into a Kallerian merchant he met last issue, Janus Kasmir. Oh, when I say merchant, I may mean smuggler. The jury’s still out. However, Janus gives Caleb some food and lets him clean up and rest aboard his ship. It’s a bit of a convenient kindness, but this is the same galaxy where Han Solo flies back to Yavin just in time to save Luke’s skin.

I didn’t think I would become this invested in Kanan’s backstory, but Weisman and Larraz lured me in. Kanan’s story is interesting. He’s way out of his depth, but he’s a persistent and by issue 2’s end, well on his way to becoming a survivor. Weisman and Larraz are telling the tale of the last padawan and how he learned to turn away from the Force and to become a survivor. It’s a dark tale that inverts Luke’s journey in Star Wars and so far, it’s a compelling one.