Some courses in the Mario Kart universe have atmosphere as a bigger selling point than track design, and Toad’s Turnpike has always been one of those tracks for me. One of my favourites from Mario Kart 64 (which finally came to the North American Wii U eShop a few weeks ago), Toad’s Turnpike is oddly relaxing to race on for a track that has you weaving through controlled commotion, a sensation brought on by the violet sky, cruising traffic and bass-driven musical composition with its signature “Ahhhhh” sounds. It’s one track where adaptability beats memorization for first-place finishes.

At first, I was pleased to find the new Mario Kart 8 version of the track just as how I envision it, with graphical overhauls, new anti-gravity mechanics and general next-gen polish. But later, I realized the new map tweaks – more spacious roads, less constricting vehicle traffic, anti-gravity walls – made for an experience severly lacking in action, one that the pleasant atmosphere fails to make up for. Notwithstanding the added feeling of realism, the difference in quality of experience between the original and this remake is dire, and that bums me out big time.

With respect to the anti-gravity walls, which allow you to bypass the main, traffic filled highway, they feel more fashionable than practical, their usefulness negated by the fact that the main highway has barely any traffic at all compared to the original version. Had the high volume of vehicles been preserved to compensate for the widening of the main road, it would have presented more of a risk/reward opportunity (i.e., the narrow, enclosed path making players easier targets) than the moot purpose they currently have in high-level races. 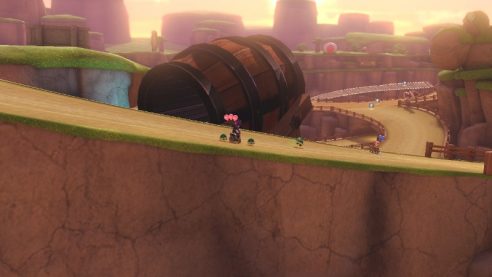 What’s interesting, though, is how Mario Kart 8’s misunderstood Battle Mode may be the reason these otherwise useless track features have been incorporated. In Yoshi Valley, savvy players know not to waste time with the route furthest to the right after the first pathway split, but in Battle Mode, this area actually serves multiple purposes — such as preparing an ambush after launching from the Barrel Cannon.

A case of flipped usefulness is also seen in our Toad’s Turnpike. With the traffic being relatively tame, there’s not much reason to use the anti-gravity walls situated along the outer perimeter. In Battle, however, these become relevant for cat-and-mouse chases and trap setups (especially when in ghost form). The seemingly non-threatening traffic can be treated as a skill shot opportunities, with vehicles acting as bumpers for ricocheting shells or places to hide from opponents, almost as if you were playing on a billiards table with moving parts.

If you’ve played Battle Mode as extensively as I have, you’ll have noticed these track tactics. However, you’ll likely also agree that it’s not the best game mode, largely because it doesn’t scale as well as the others. Unlike races, two-player battles are a pain due to starting on opposite ends of the track, and stalemates are a real possibility if a leading player decides to camp, flee or be general cheap. But with a full player count, the strategic game of Battle Mode opens up, and these track oddities become clearly purposeful inclusions. 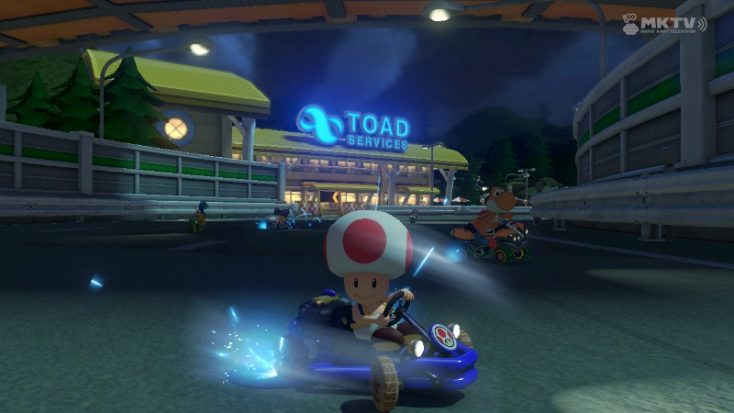 This is evident right from the get-go of a Battle round, with players starting in a line formation, instead of the usually dispersed starting positions. In front of the starting line, one item box tantalizingly floats. This creates multiple starting strategies: rush the first item box, accelerate towards the next set of boxes, circle the area for the next item grab to appear, or reverse and head in the opposite direction, avoiding the conflict from the very beginning. Furthermore, this is one course where it feels especially tense to have multiple ghosts tailing you, as the road environment keeps you on high alert as ghosts give chase.

I stated before that the lack of action is ultimately the main reason why the remake of Toad’s Turnpike doesn’t work as well as it should. This, despite the brief trick zones offered by various vehicles, as well as launch opportunities from truck ramps, is why I feel Battle Mode has saved Toad’s Turnpike, bringing – in the right setting – needed energy and tension to an underwhelming race course. And I think so long as that option exists, I can make peace with simply tolerating the remake.

Games Should Make Us Smarter, Not Stronger
Previous Post

Unwinnable Listens to the Best Music of 2016 – Finale