The Ratchet and Clank games get a lot of praise for their wacky weapons, whether it be the Groovitron’s hypnotic disco ball or the lovable Mr. Zurkon and his cheesy one-liners. While I enjoy transmogrifying giant robots into fluffy sheep as much as the next Lombax, I feel like the real beauty of R&C’s arsenal often gets overlooked. From tutorial to credits, what keeps me invested in the otherwise solid-but-unremarkable combat is something I wish far more games ripped off: weapon leveling.

The system is pretty straightforward. Weapons gain experience as you use them, granting you damage boosts and increased ammo capacity with each new level. These perks alone are nice, but they aren’t the reason I love the system so much. By attaching a sense of progression to each weapon, even one as simple as an experience bar, R&C compels me to cycle through my arsenal constantly, leveling up as many weapons as possible in order to unlock new tiers in each weapon’s skill tree.

This isn’t how I typically play shooters. In something like DOOM or Gears of War, I’ll find a couple of favorite weapons and stick with them for the entire game. From a practical standpoint, my trusty shotgun/burst rifle combo serves me well. Too well, in fact, since I end up never using half the weapons in any given game, swapping out my mainstays only when I run out of ammo and switching back as soon as I find more. 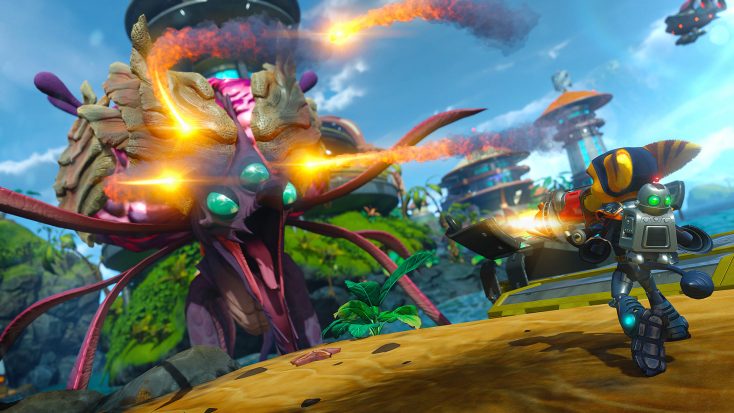 In R&C, though, I know every weapon inside and out. Spurred on by the satisfaction of maxing out experience bars, I buy and level up every gun in the game, inadvertently learning the quirks and capabilities of each along the way. Normally, I wouldn’t give two hoots about a weapon that only stuns your enemies, even one as goofy as the Groovitron. But after leveling it up a couple of times, I realized that it made the perfect companion to the Plasma Striker sniper rifle, exposing enemies’ weak points for easy one-hit kills. Thanks to the allure of leveling it up, the Groovitron is now one of the most deadly weapons at my disposal.

More than a front of vibrant creativity, R&C’s weapons encourage you to step outside your wheelhouse, to toy with tactics you’d normally skip over in favor of the tried-and-true. The primal satisfaction of seeing bars fill and the numbers go up liberates you from the tired loadout you’ve carried through countless shooters over the years, reminding you that games are as much about experimentation as they are expediency. Maybe you’ll stumble upon a new favorite weapon, one that completely changes the way you play; or maybe you’ll discover a deeper appreciation for your trusty shotgun thanks to its no-nonsense point-and-shoot interface. Either way, R&C’s weapon system leaves you feeling stronger and wiser for having engaged with it. My only complaint is that more games haven’t followed Insomniac’s lead. It’s been 14 years since Ratchet and Clank: Going Commando first introduced the concept; why aren’t weapon levels industry standard already?