As somebody who has always loved the Final Fantasy games foremost for their journeys, I was sold early on by XV’s road tripping aesthetic. Watching those first trailers — with their shots of the crew zooming down the interstate, the imperial airships floating menacingly above, or of Noctis and his friends gawking at a mountain sized turtle lumbering off in the distance — reminded me of those Saturday mornings where I’d wake up at 6 AM, giddy to see what sights awaited me and my party around the next screen.

Now I’ve known for some time I’d never get that joy back, not as I remember it. Memory is a tricky damn thing, and there’s no telling if what I feel now when I think back on those earlier games is actually how I felt as I played them. Besides, my idea of adventure has changed drastically. As somebody who’s played thousands more games, read thousands more books and lived all over the world, the most exciting trip left to me is getting in the car with three friends and taking off down the road, just to see what we can find. Stopping off to hike an unlisted mountain trail is a thousand times more interesting to me than trekking through another dungeon or technologically advanced ruins left by forgotten civilizations. Getting stuck in a ditch and covered in snow after an eight-wheeler bullies you off the road in a blizzard is terrifying, but in its own dark way, incredibly exciting. My hope was that XV would somehow mix this more grounded approach to traveling with the kind of odyssey they were famous for to create something entirely new, a kind of journey I’d never known I’d wanted.

Well, so much for hoping.

The end result resembles much less a fantastical road trip than it does two whole days spent running errands for your parents while you’re back for the holidays. Your time is spent completing a tedious series of chores that finds you trekking back and forth over an area not much bigger than thirty square miles at the behest of people too busy with their own problems to spare the time to grab groceries from the store or clean out the attic. The biggest problem is that it seems like the developers had no clue what actually spurs a road trip. They do not understand that the joy of road tripping lies in discovering what you never knew existed, of extending far beyond the mundane daily life you’ve built around yourself. They have never known the thrill of pulling past Knoxville at 6:30 AM and turning a corner to look out unto a gorgeous, mist filled valley. They have never come out of the mountains of Colorado to behold the immensity of southern Utah’s plains stretching out in all directions for what seems an eternity. They do not not understand wonder. 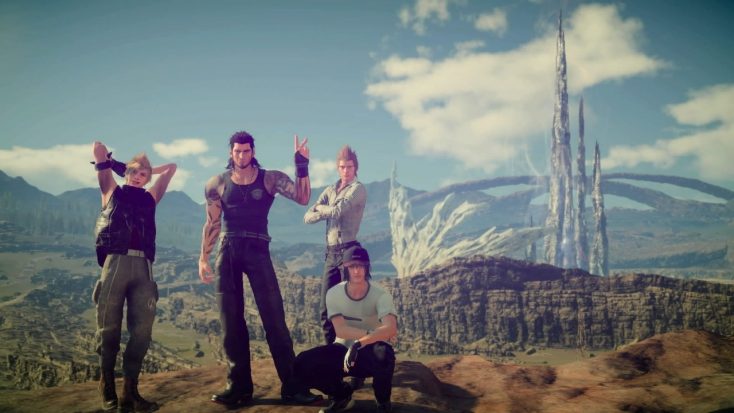 XV is pretty, no doubt, but only graphically. The art direction is a snooze, marked by the same hideous Tetsuya Nomura style character designs that have plagued every Square franchise for the last decade. Generic environments lack all semblance of character, of place or history, which in turns drains them of any capacity to inspire. You might be going to a volcano to pick up the eggs of the fabled Roc or heading to a techno-futuristic Venice to get Leviathan’s blessing, but for all the personality of place and characters, you’ll feel like you’re heading to the local Mega Lo Mart to ask if they carry a certain shade of paint. You may go delving into ancient dungeons or climbing through massive military installations infested by demons, but for all the game demands of your attention and ability, it’ll feel more like you’re cleaning out the garage than witnessing something exotic.

Unlike the best of road trips, there is no urgency to your motions, no sense of propulsion driving you forward. Occasionally a contingent of robots will drop out of the sky and unto your head to remind you there’s a story happening somewhere concerned with gobbledygook about an evil empire, a crystal, and a virus that eats light, but it feels utterly incidental to the million and one side quests that make up the bulk of the game. It’s like a magazine you read while waiting at the red light on your way to the next dull errand, a forgettable distraction to keep you from focusing on the mundane chore that your daily life has devolved into. Which is antithetical to everything a road trip should be: these journeys have a mythic dimension because they inspire people to drive out of their house and their dull routine for weeks at a time with the promise of the unfamiliar and fantastic. They’re against the routine by nature. A game promising these delights cannot in good faith offer up more of the exact mundanities a player looking to escape might be looking to escape from.”