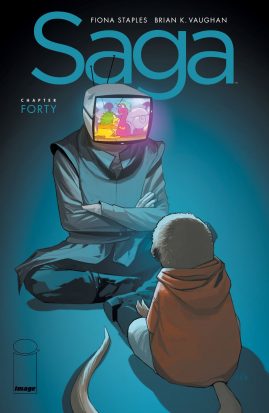 It’s hard for a long-running, almost objectively great series like Saga to ever put out a truly bad issue, but some are definitely more of a slog than others. If you take away the cliffhanger from issue #40 – and it’s a hell of a cliffhanger – you’re left with an episode that spends slightly too much time checking in with as many of our heroes as possible, to the detriment of more focused character development.

What we get with this issue is a large number of scattered character POVs while the main storyline, The War for Phang, barely moves forward. There is something to be said about the particular tension that creates: the feeling like there’s a thousand moving parts that ultimately move the needle only a fraction of an inch. I’m under the impression that war can be summed up nicely by long periods of bored anticipation punctuated with shocking violence.

Still, the scattershot perspective changes are frustrating as a reader. As much as I long to have more time with Sophie, Gwendolyn and Lying Cat, the four pages we’re afforded for their part of the story come off as more of a tease than a proper update. Similarly, as a longtime reader, spending any amount of time listening to Marko explain how anti-weapon and anti-violence he’s become is a waste. I understand a certain amount of reminding can be necessary for old-timers and new readers alike when dealing with major character traits, but less time spent on Marko’s well-established pacifism means more time spent on Sophie and Gwen, or Petrichor’s coming into her own.

I’m sure many of the seeds being planted here will bear wonderful fruit down the line, but if each character or group is only going to have three to four pages devoted to them, I almost wish Vaughan would just dig in his heels and insist on moving things forward even more slowly, spending each issue really lingering on two or three major character interactions. Or hell, give us a true “bottle episode” and deliver a load of exposition while letting a few characters we’ve known forever really play off of each others’ histories and quirks. A series known for its rich and well-developed ensemble of major players should feel more comfortable trusting its readers’ attention spans. 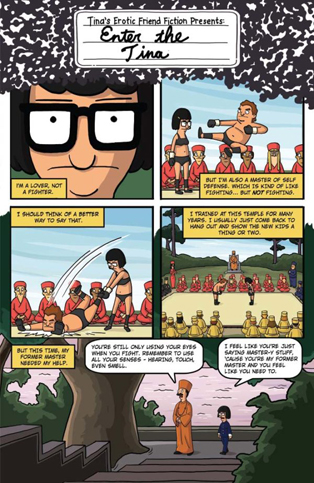 Bob’s Burgers: Char Broiled Collection, as a whole, is a kind of uneven mishmash of things. On one end of the spectrum are stories that maintain the quality of the show. On the other end, if they were part of the show would be tolerable vignettes until something else happened. Put together as a collection the individual issues feel disjointed. They’re not meant to coalesce into Voltron or anything but even so, something feels missing.

This is the best. Writer Justin Hook masters the YA as written by someone who only reads YA. Hook absolutely gets Tina in a way that only awkward people who have written massively awkward fiction can understand. A while ago, I was the person. It’s weird. But “Enter the Tina” is also an amazing little Kung fu story staring, perhaps, the most underappreciated Belcher. It’s a classic story of Tina battling the evil Tammy and doing so in a bizarre and awkward way. It works. It’s a genre tale in the style of Tina Belcher (though Kung fu might be a Louise thing) and if I was giving points it gets five burgers out of five.

Writer Jeff Drake treads a fine line here. At once, it’s just Louise’s version of The Fly, but Drake weaves in Louise’s voice well. It’s the story a kid writes after they stayed up late and watched a horror movie. It feels the way it’s supposed. However, without Louise’s actual voice it feels as though the through line is missing. I’m adept at reading a story and hearing the voice of a character but I just can’t hear Louise saying all this stuff. A part of it is the pacing, part of it is the lack of secondary characters, part of it is just that, on its own, the story takes too long and holds up. Three of five burgers.

“Gene’s Rhymey Rhymes That Could One Day Be Songs Presents: A Musical Gene in King Arthur’s Court”

Oh man, this one. I did not enjoy this one. Add in the new art style that is very different from the other four issues in the collection and the show and I was not a fan. I’m not even sure what this one is about. I’ve always found Gene to be somewhat of an acquired taste but what makes him really sing is him actually singing. A voiceless, soundless comic is not the place to be doing a musical Gene moment and it shows. One Burger.

The last issue in the collection is a three part story done in the vein of each kid.

“Gene’s Rhymey Rhymes That Could One Day Be Songs Presents: Little Bob’s of Horrors, Part 1”

Confession time. I do not like Little Shop of Horrors. It just didn’t click with me. I don’t think it’s bad, I just don’t enjoy it. That being said . . . this is okay. It still lacks the actual musical qualities that make Gene’s musical numbers work but its got potential. It stumbles but whatever, its about a killer burger.

That weird art style I didn’t like returns here. I’m not a fan. Its distracting. Bob’s Burgers has a unique kind of look and feel I imagine and this isn’t it. Unlike the one off alternative covers or interpretations this makes them feel like a totally different show with different voices. The story is kind of paint by numbers, too.

By this point I was gasping for air. Unfortunately, I wouldn’t get it. This just lacked the charm of “Enter the Tina.” Gene is the one who likes musicals. Louise loves monsters and abominations. I don’t understand why Tina would be writing this. There’s no horses or zombies or cute boys. It’s just not a Tina story and it’s a missed opportunity.

Each of the kids should have gotten a turn at this one and swung it wildly with their own unique flair. Instead, this is a Gene story that his sisters kind of pick up the pieces on. Two burgers.