I suck at videogames.

And honestly, I’m okay with that.

The realization for this came a few months ago. I was playing Battlefront, and my Imperial stormtrooper, garbed in the long white armor of Hoth, was gunned down as I emerged from a snow covered valley on the hunt for Rebel scum.

I’d only managed to kill two of my enemies that day.

I realized at that moment something that I think I was trying to deny for years. I’m simply not that good at videogames.

Now, of course, realization doesn’t equal acceptance. That took a little longer and I needed a few more realizations before I finally came to terms with my lack of skills.

Since I was a kid – back when arcades were hip and quarters were my crack – I kinda knew it wasn’t a talent of mine. I played Q*bert and Donkey Kong with relish, but there wasn’t anything special about my control stick tricks. I’d get a few levels in, watch the colors change. Still, it was nowhere near as deep as the wizards I’d see playing each day after school.

At a bar once, where I often spent time as a child, there was a fellow I met. I remember him in a dark t-shirt, thinning black hair, probably had a bit of a spare tire hanging over his jeans, but can’t be certain. He was at Pac-Man like it was serving him drinks. There was no emotion as he played. He just cooly worked the controls, sending that little yellow guy munching through one maze after another. It was magical. He downed Budweisers like they were power pellets.

I watched him play, enamored. He did it with such ease.

He, of course, noticed my attention. Not that I was hard to miss, a bright-haired blonde hanging around an establishment I had little business frequenting. Anyway, he told me that Pac-Man was a simple game. You just had to know how to beat it.

He explained it to me. Mind you, I can’t tell you what he said. Hell if I remember. I sorta recall some of it making sense to me at the time, but his advice didn’t stick. I went on being an average Pac-Man player.

Over the decades I’ve played all sorts of videogames on all sorts of platforms. I wrote code on my old Vic 20, played Sierra games on my Commodore 64, battled Piston Hurricane in Punch Out!! and obsessed over Kid Niki on my Nintendo. I once spent nearly 12 hours and watched the sun rise in a Warcraft game where I was hopelessly outmatched, but simply kept surviving for hours by relocating my base repeatedly out of pure stubbornness.

I don’t play as many games now as I used to. It’s a thing taken up by my son (who’s far more into it and vastly better than I ever was). My daughter, too, to a degree. I still play. I love the Batman Arkham games. The Walking Dead series from Telltale Games is outstanding. Minecraft comes in and out. Then there’s the occasional app on my phone, although they rarely last long.

However, it was one of those apps that helped me come to terms with not being good at videogames.

Marvel Contest of Champions is the only app I haven’t been able to shake. It’s my obsession.

I don’t play games for very long. A few weeks, perhaps. Most times I don’t finish them. Whatever experience I was looking for in playing gets tapped out long before I reach the conclusion. With game apps, that window is far shorter. Yet somehow Contest of Champions has me hooked. It’s the Amy I’ve been chasing since it was released. I kicked it for a few months, but recently fell off the Radio Flyer. I’m in a good alliance. I’ve got more than a dozen four star characters. I’ve even nabbed a five star, with another five star soon to come.

It’s just a fighting game. Nothing special. It’s one punch, kick, special move after another. You rack up crystals and catalysts to get more champions and rank up the ones you already obtained. The graphics are well done and they keep throwing new characters and events at you to shake things up. Met one of the designers last year at the New York Comic Con. Nice guy.

In the game you do certain things with your alliance. There are alliance quests and alliance wars. Quests aren’t too tough. I’ve gotten pretty comfortable with my top three champs and I generally hold my own, taking out nodes left path and right. 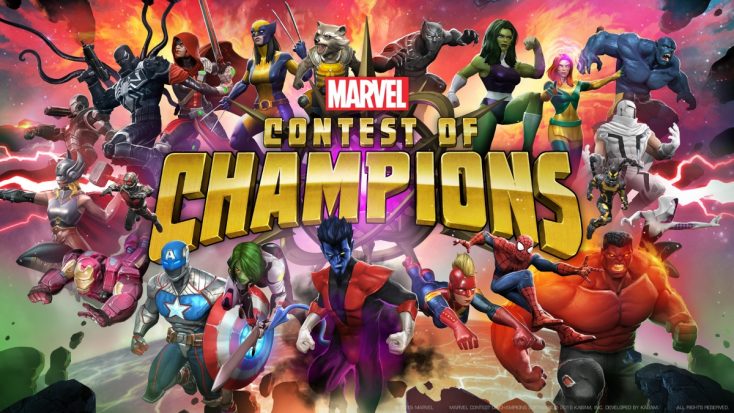 Wars, however, are a different beast. Although they generally vary in difficulty, I find them hard. So hard, in fact, I frequently don’t make it past a single opponent. It’s embarrassing.

I was frustrated by it all. The champions you face are ‘roided out with all sorts of special abilities and power boosts. Thorns, bleed, poison, regeneration. Their armor is amped 200 percent, while their power gains are through the roof. This basically makes them about 4-5 times more powerful than my characters. One mistake is all it takes to get flattened. And flattened I get. Every time.

I knew I wasn’t helping the war effort, but at the same time, I need those crystals, bro. Gotta get’em.

I have sat out of the wars several times for this very reason. I didn’t want to mess things up for the alliance by joining and not being of any help. I’m good like that, but it doesn’t make sense for me to not at least try.

And try I did, but then I got slapped by my alliance members. Several of them start criticizing me, both ‘publicly’ and privately.

Now, as I’ve said, I’ve known for a while that I’m not very good. I suppose I’m not the worst, but when it comes to these games, I just don’t have any natural talent for it. And on the phone, man, I tap my thumb or slide it back to dodge, but sometimes I’m just not fast enough. Through Contest of Champions, I discovered is that I was getting disappointed about that. It was getting to me. I wasn’t enjoying it at all.

Then it hit me. All these years of feeling bad about it, trying to deny it, trying to hide it – it wasn’t helping. In fact, it was just taking away from the fun, and having fun was all I wanted in the first place.

So, I accepted it: I suck at videogames. I don’t need to be the greatest in the world. The funny thing is, when I accepted it, I realized something I had never considered before: the reason I like videogames is because I like the experience of playing them. I don’t need to beat all the levels or have the highest score. I don’t have to be the best. Hell, I don’t even need to see it through. Screw all that, the end result is irrelevant.

It’s the experience of having played them. Very often, there are fond memories about those games. Like my brother and I playing 1985 on my first computer in the dining room table of my childhood apartment. Watching the Street Fighter battles in the senior lounge in high school. Figuring out the answers to the questions at the beginning of Leisure Suit Larry and feeling like I was playing something inappropriate.

I once burned the hell out of my back. I’ve got Irish skin, but for some reason during a school camping trip in 7th grade, I laid out in the sun with no shirt on. No clue what I was thinking. In the end, my back looked like a Dominos pizza. Two or three days later, it started to itch. That’s the worse part. I may have even lost my shit for a while, screaming and yelling.

What helped was videogames.

I remember playing my Donkey Kong II on the bus ride home. Then in between Epsom salt baths, I jammed the floppy disc of G. I. Joe into my Commodore and played that for a while.

I forgot all about the itching and my peeling skin. I was at peace.

Four Games to Play Next Halloween