Nostalgia for the 1980s has reached an all time high in recent years.  Between the flood of remakes of and belated sequels to classic 80s movies and the massive popularity of new properties drenched in 80s references, it is safe to say that the Decade of Decadence is experiencing a totally bodacious comeback.  It has become one of our favorite nostalgic playgrounds, the era upon which we can project our childhood fantasies.  So it makes sense that game developer Kreg Mosier decided to set his new project, Noir Wave, in a magic-infused version of 1980s Miami.  I spoke to Kreg about his development process, his favorite 80s franchises, and his thoughts on crowd funding as a tool for indie designers.

The neon light wrapped around me like a lover, cast by the giant sign outside my office window. I hung my long coat up on the Lisa Frank hanger she had left there so long ago, wondering if she still did magic. Wonder if it ever killed her? That crazy mixed up kid and her dreams of power. “SEX”, then “MAGIC” cast its glow on me once again from the billboard outside. Was it a sign? I threw up a ward as I lit the last clove cigarette in my pack.

Megan Condis: Thanks so much for talking with me!  Let’s start by having you introduce yourself.

Kreg Mosier: Howdy!  My name is Kreg Mosier, and I am a long-time tabletop gamer.  I started playing D&D a few weekends after waiting in line to see Star Wars in 1978.  There was this amazing store called Nan’s in the Houston Galleria (SHOUT OUT!  It’s still in Houston, but now over on the Southwest Freeway!) that had a box with this cool dragon being yelled at by a Wizard on the cover (the Holmes edition of the Basic Set), and these incredible painted figures all arranged on a paper grid with a few crazy monsters around them.  Well, I was hooked.  Not sure what part of my brain just clicked, but it certainly did, and has been that way ever since.

These days I still play a bit of the latest version of D&D, but I also enjoy games like Dungeon World, Ryuutama, Mutant Future, and many others. Online, I can usually be found on Google+ among the OSR crowd and the DIY hobbyists.

In 2009 I put out a survival horror tabletop game called The Dead which you can now freely download. I charged for it initially, though only at cost for the printed version.  I had no delusions of making a living off of my hobby, and Kickstarter or Patreon wasn’t around at that time (which is apparently how people monetize their hobbies these days?).  It was fairly popular, and I received lots of positive comments from those who played. Noir Wave is my next big thing. 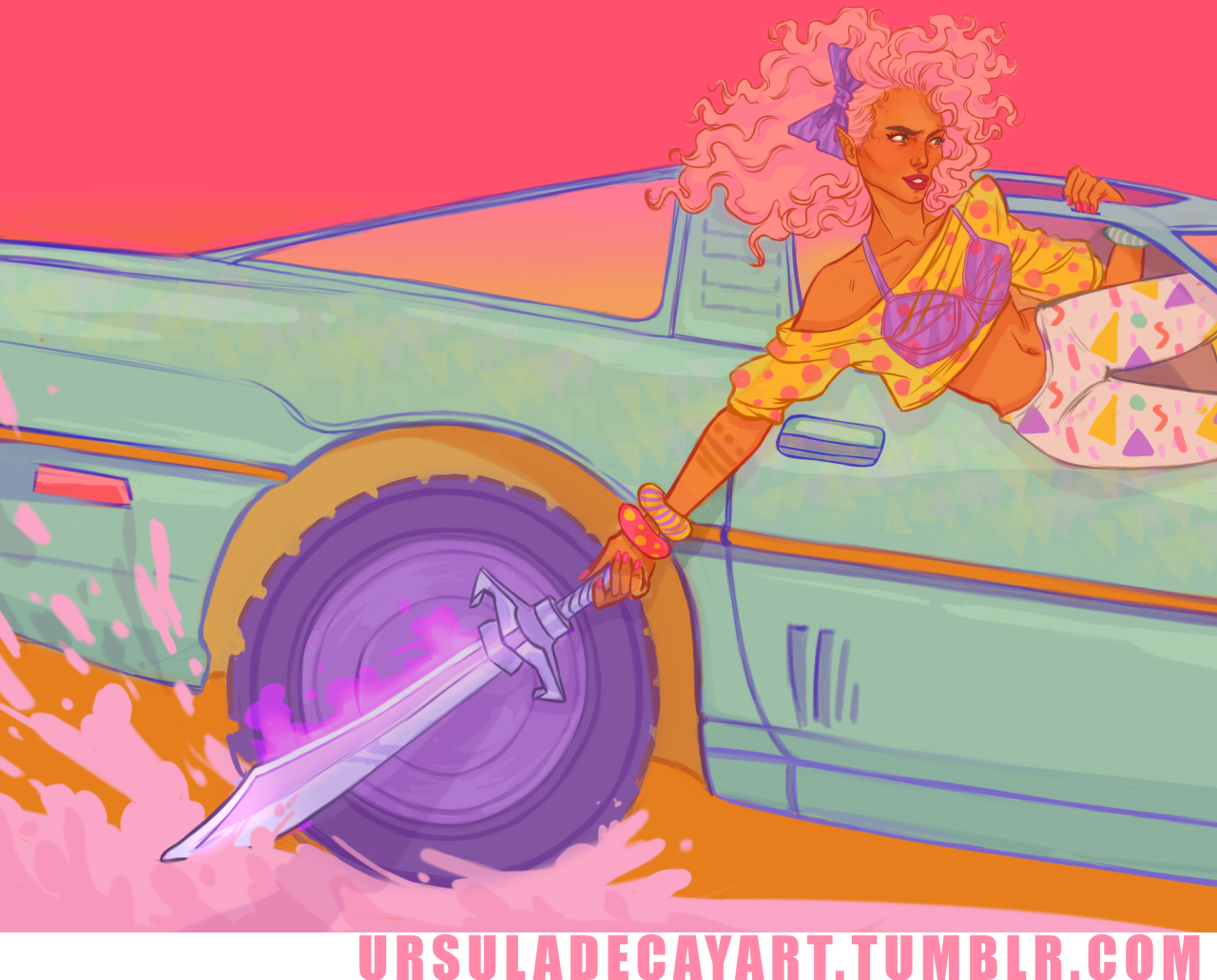 MC: Can you give us a brief overview of the game setting? What inspired you to send players back to the 1980s?

KM: Noir Wave is The Breakfast Club as interpreted by Joseph Campbell and J.R.R. Tolkien while listening to Erasure.  It is a roleplaying game about an 80s that never was. Think Miami Vice, 21 Jump Street, The Breakfast Club, and every trashy fantasy novel ever made shoved in a blender. Noir Wave would be the freaky concoction that would result.  I’m not sure what it would taste like, but I’m imagining something like an awesome sherbet and ginger ale punch…with bitters. The players will take on the role of Police Academy candidates who have been selected for a small, clandestine team working in conjunction with Miami PD and the Department of Justice. Law enforcement needs them to handle Magic-related happenings that they can neither observe nor protect people from. Since a lot of interaction occurs with those under 25, METRO-DADE needs young undercover officers to be active as the eyes and ears of law enforcement within the youth community, thereby also mingling with the Fae.  Oh, did I mention the Fae? Yeah, well see, there was an awful tear in the fabric of reality.  And all of those Elves, Goblins, Boggins, and other creatures of folklore and myth? They’re real, and they’re back….and some of them hate us. There is a contingent among the Fae (the Unseelie) that desperately want to see humanity subjugated and chaos rule the world. You and the others on your team aren’t going to let that happen. You will be Watchers, ever vigilant against the encroaching weirdness. Problem is, almost no one under the age of about 25 has any idea that they even exist. When you get old, a little piece of your soul ceases to be and that’s where all the innocence, wonder, and willingness to believe used to exist.

The sacred geometries created when the founders laid out the plans for London and many other major European cities was done with forethought and precision, to protect the inhabitants from supernatural forces, and to ensure that the closely guarded secret of the Ley lines and their intersections would remain just that; a closely guarded secret. These magical boundaries disallowed spirit travel, and deterred entry by extraplanar entities to major population centers.

After the Great Fire of 1666, a disregard for the old ways and haphazard rebuilding left small cracks in the wards and protections built into the very foundations of the city.  Centuries later, the Blitz tore it completely asunder. This destruction and lack of thaumaturgical oversight allowed for the first small, tentative incursions by curious Fae,    and would forever change the course of our world.

MC: What kind of game mechanics will you be using?

KM: Traditional dice-based resolution is right out.  In order to determine if your character’s action is a success or a failure…whether they are able to jump from rooftop to rooftop, or to punch a mook in the face, they’ll be relying on the randomization created by a Rubik’s Cube!  I mean, it’s the 80s, so OF COURSE this would be how you resolve success or failure!  I won’t go into a lot of detail because I’m still trying to ensure the math works, but it will involve matching colors for specific actions.

MC:  80s nostalgia is in full swing right now.  Why do you think the pop culture classics from that decade are making such a fierce comeback right now?  Where do you think your game fits in?

KM: I think it’s just that period in time where a bunch of people my age are all reflecting on their salad days and enjoying the view that only rose colored glasses can provide.

MC: Classic 80s films are somewhat notorious for casual scenes of racism and sexism that seem shocking by today’s standards At the same time, as the response of online trolls to the news of the all-female Ghostbusters remake and the rise of #GamerGate has shown, there is a substantial contingent of fans who are pushing back against efforts to create a more diverse environment within geek culture.  How have you attempted to build inclusiveness into your game’s design? What particular concerns do you have about diversity within the tabletop gaming community?

KM: OOF.  Yeah, I mean, I think all of that still exists today, but we’re more comfortable calling people on it.  I like to consider myself a lifelong learner with regards to being a better person, but I’m fairly certain that each new generation will find something shockingly terrible perpetrated by the previous generation.  (Hopefully that occurs with Aspartame for the next generation…)

This is the Fantasy 80s, of course, but I think there’s room for players to sort of subvert a lot of the terrible or problematic aspects of that period with this game.  I’m purposely gender-swapping a lot of roles that some folks would commonly associate with more conventional portrayals.  For example, one of the Archetypes the player can choose from is the Princess. Do they have to be a female? Absolutely not! Could they be a Prince instead? Go for it!  Transgender? By all means!  I like to think of the Fantasy 80s as the chance to set straight a lot of the things we as a society have gotten wrong for too long.

I mean, ultimately gaming is an escape, and a diversion from your mortgage, electric bill, and monotonous job.  It would be my honest hope that ANYONE could play this game, and maybe feel good for a few hours.  The trickiest part for me is going beyond simply saying all of this, and actually trying to find ways in-game to encourage this, via in-game mechanics or otherwise.

The Fae themselves are effectively gender fluid. They’re a force of nature, so they can identify however they want, whenever they want. They are not bound by our social mores or institutions.

MC: Kickstarter has been the launching point for many creative, stellar tabletop RPGs in recent years.  Do you see a place for your game on  the platform?  What kinds of things would you dream about adding the game, given enough support and funding?

KM: Call me foolish, or old school, but I’m actually pretty cool with creating something using my own resources, then just selling it and seeing what happens.  I think a lot of people think Kickstarter is their ticket to “the big time,” where they can be professional game designers, leaving their humdrum day job behind.  Then fulfillment happens and you’re paying out of pocket for shipping because that cost has increased and then OOPS, you spent all the money on way too much Art.  I know there are plenty of successful projects out there, and some incredible creators that reply on successful campaigns…but I’m just not willing to base my business plan around the generosity of strangers.  People will pay good money for good things, or not; I’m willing to take my chances.

If I had more resources, I’d LOVE to print the thing with a hardback shell that looks like a Trapper Keeper.  Inside would be pockets/folders for character sheets, notes, maps, etc.  I’d also love to fill the thing up with even more Art, and maybe even have a soundtrack CD! (or would a cassette tape be more appropriate?)

MC: Okay, and now for the hardest question of all: what is your favorite nostalgic 80s franchise of all time and why?

KM: Wow…a single favorite?!  Though it isn’t a genre movie per se, one of my all-time favorite movies from the 80s is and always will be Streets of Fire.  It literally has everything you could want: musical numbers, action, romance, humor, drama…the works!  It’s a road movie, it’s a love story…and you get to see Willem Dafoe as Raven Shaddock, who is one of the creepiest villains ever.  DID I MENTION THE SLEDGEHAMMER FIGHT?!  Sure, it has its roots in the “Damsel in Distress” trope, but I have to give it a pass because I love it so much.

MC: Thanks so much for your time!