Pokémon Go’s launch has been rough. The game’s servers are constantly down, the game itself freezes and crashes often, and some of the game’s key features, such as gyms, are a buggy mess.

Despite all of this, Pokémon Go is already a massive success, at least, where it counts. It has, as promised, gotten people to get up and go. A lot of people, in fact. 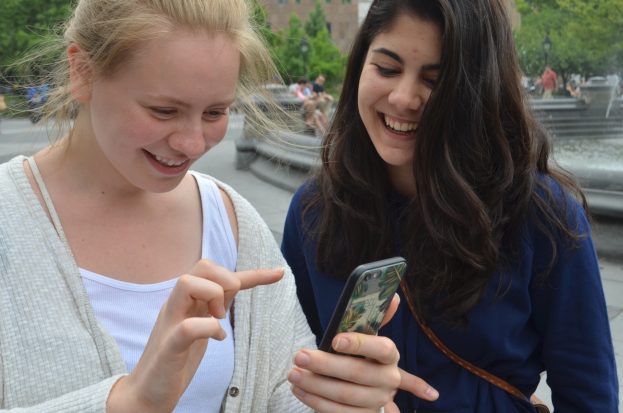 Connie was one of dozens playing in the park 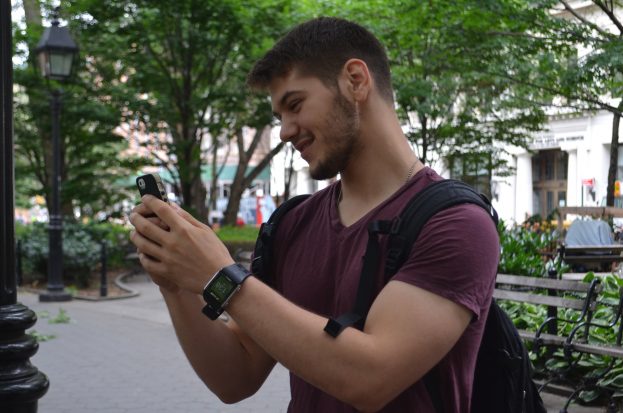 Joseph was quick to ask for tips

Personally, I have walked thirty miles in the last three days, entirely because of Pokémon Go. Yes, I live in New York City, perhaps one of the best locations for Pokémon Go, with solid cell service, a plethora of Pokéstops and, most importantly, a very pedestrian-friendly environment. But the last three days have been entirely abnormal for me. I’ve befriended new people and rekindled dying friendships. I’ve traveled to new places. I’ve wandered through massive parks at midnight, trying to take over gyms, only to be approached by grinning strangers boasting: “You guys having trouble with our gym?”

No other video game makes you travel, socialize, and befriend as many people as Pokémon Go. While it may seem insignificant that a stranger and I are playing the same mobile game, that coincidence can go a long way. Ask anyone playing on the street, whether they are alone or with a group, and it becomes obvious how Pokémon Go is bringing people together.

“We’re in a Columbia [University] medical internship program, there are about 80 interns,” Michael, a charming young man who couldn’t stop smiling, says. “We’ve gotten to know each other and become real friends because of [Pokémon Go].” Different members of the group of six chime in. “I think, of the interns, 40 of them are playing now,” Lola, rocking a half-shaved hairstyle, mentions. 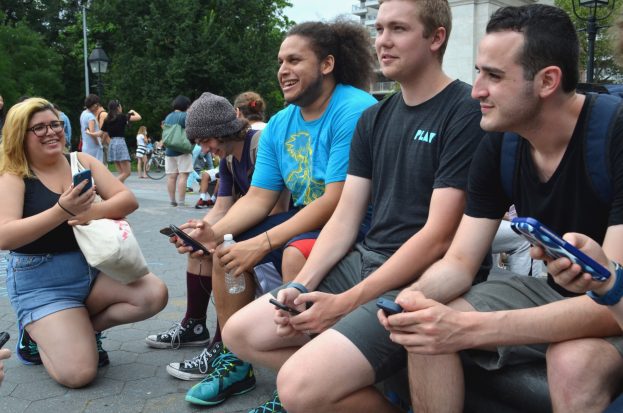 From left to right: Lola, James, Michael, and the rest of the Columbia interns.

Elsewhere around Washington Square Park, a central location in Lower Manhattan’s Greenwich Village, solo players were just enjoying being out.

“It gets you moving,” Victor, a daper young man, tells me, in the middle of an important catch. “No other game gets you actually outside, walking around, y’know. I’m from The Bronx, I’ve been going around all day.” 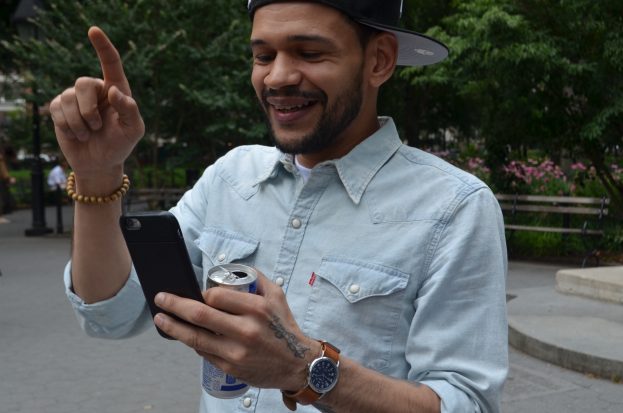 Victor multitasking during our conversation

Every Pokémon Go player I’ve talked to has shared this sentiment, regardless of how many miles they’ve walked. The other most popular statement? “What team are you?”

“We’re all Team Blue,” a group of men, late twenties, with tattoos and snapbacks, say. “We took a gym over in Murray Hill. This one’s blue too,” they say, pointing to the famous Washington Square Arch.

The existence of teams in Pokémon Go encourage players to meet up with new or old friends, to boost their odds of controlling a gym. When the gyms are actually functional, teams provide that extra sense of comradery that suddenly make strangers into allies.

“I chose team blue because he’s team blue,” Emani, a grinning young woman explains next to her embarrassed boyfriend. “I though ‘I like you enough,’ I didn’t want to ruin anything if I chose a different team,” she stated, only half sarcastically. 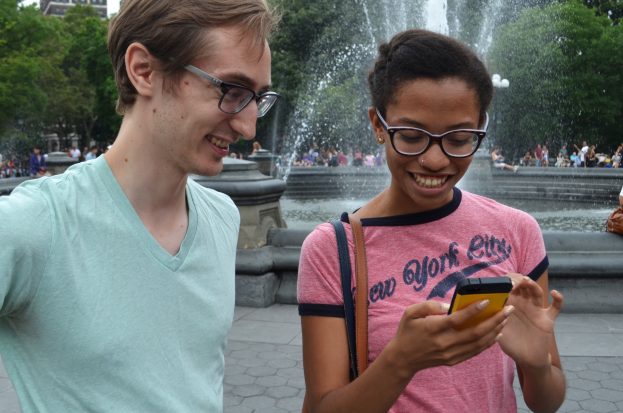 Some couples had a different way of looking at teams, though.

“I choose a different team than him on purpose,” Lily says, poking fun at Michael standing next to her. “I wanted to battle him, and that’s the only way to do that right now.” 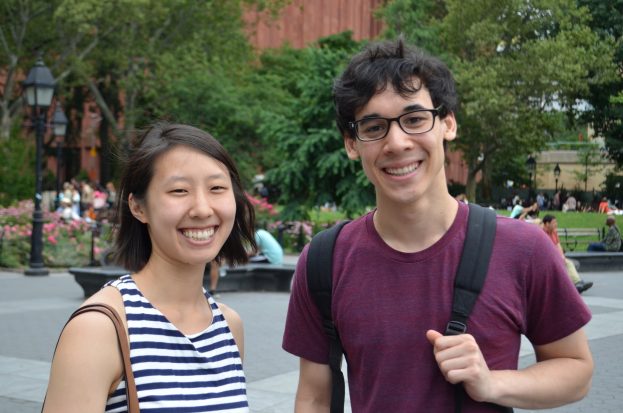 Lily and Michael, the friendly rivals

Players, of course, had a myriad of complaints and suggestions too. But, in the same way that they were united in their enjoyment of Pokémon Go, they were united in their complaints. Everyone, and I mean everyone, complained about the servers not working. Having their fun suddenly ruined due to bugs, freezes, and glitches was running theme, right alongside groans of shared frustration.

In a strange way, the singular bane of Pokémon Go, the technical problems, have became part of a shared drama for players. Groups will finally find a rare Pokémon, only to have half of them kicked out of the server. Your team might finally conquer a nearby gym, only to have the battle freeze at the last second. This leads to frustration, naturally, but also a deeper bond between the players. Can you think of another game that leaves its players smiling and goofing around after they’ve been kicked off of the game’s servers? 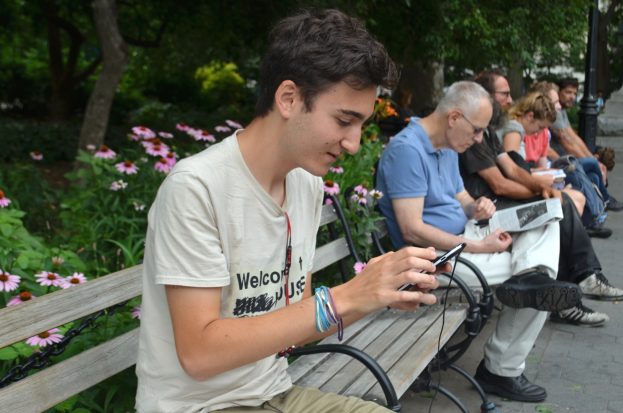 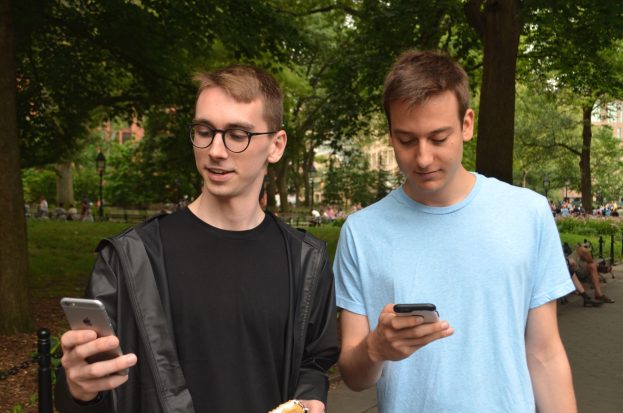 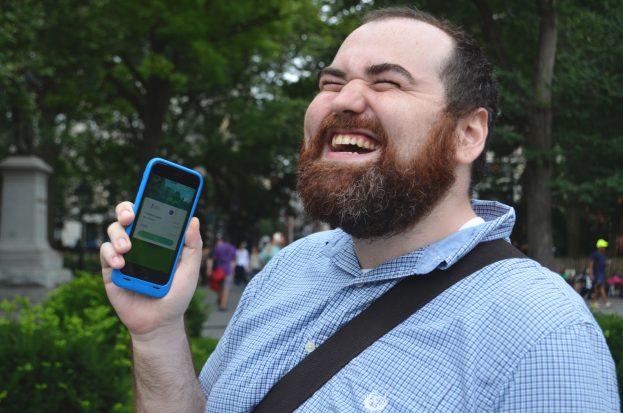 After a difficult catch, pure bliss from James

That’s how powerful the core of Pokémon Go is. Even though the game is far from perfect, has started off with an arguably terrible launch, and is missing tons of features requested by every player I spoke to, people are still having a blast playing it. I’m used to New York City streets where everyone on their phones is irritated or angry. Now, I’m seeing the opposite, entirely because of Pokémon Go.