I love a good conspiracy theory every now and then. But they have to be good. None of this nonsense that just boils down to xenophobia or the mafia. I expect nothing less than aliens, mind control and massive international webs of intrigue. Sometimes lizard people. 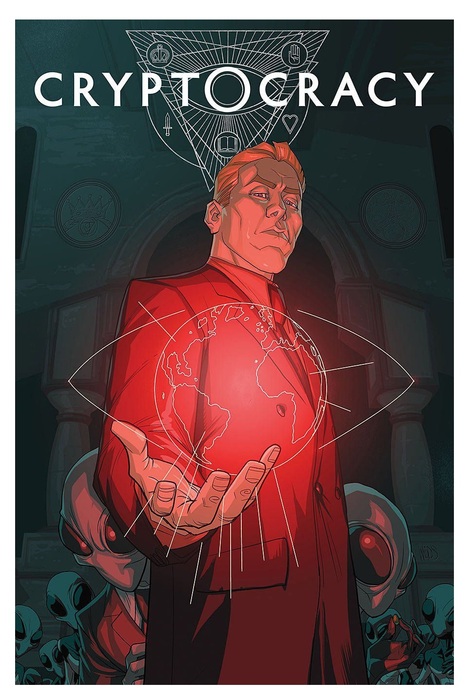 Comics, plenty more). The premise is deceptively simple; every conspiracy theory is real. Denver International Airport is really a hub for a New World Order style shadow government, Roswell really happened, and exactly nine families rule the entire planet for their benefit. The rest of us plebes are essentially along for the ride. Until now, that is.

The Cryptocrats’ well-entrenched and established New World Order is about to experience some disorder. What that something is, remains to be seen. Of course it does. It would be stupid for really any of the secrets of Cryptocracy to be revealed in #1.

That’s one of the beautiful things Jensen plays with. What are the mysteries in a world predicated on the truth that all conspiracies are true? What is hidden in a world that blows off the doors on numerous conspiracies on the first page? Suddenly the questions are on a second level. There’s no point in asking IF aliens exist, they do. Instead, Jensen begs us to ask what are they like? How do they speak, what powers do they have? Do they even have powers?

Woods answers many of these questions with ultra clean art. Some of the answers are easy. Of course a typical “grey” looks like that. That’s to be expected when Cryptocracy demands you move beyond the obvious. It makes good sense that secret bases are a hybrid of lavish estates with sci-fi qualities. But what the hell is that bear thing? What do all the gizmos and gadgets do?

Unfortunately, right now, I don’t really understand any of the characters, or even remember their names. It’s early days though, I haven’t had the chance to really sink my teeth in and neither have Jensen or Woods. With a few strong, interesting characters I can see success lurking on the grassy knoll. But right now, it doesn’t have any.

But can a story which so brazenly pulls back the curtain remain mysterious? Can it keep bringing people to the table? For me, the upheaval almost happens too fast. I was expecting at least two or three issues of world building before Cryptocracy began to turn its world on its head. Cryptocracy has a great beginning point and an intriguing premise but what can it do over an entire arc? Where can it go? What can it accomplish? After issue 1, I’m interested in seeing how it pans out.

This is another example of a random awesome discovery in the comic book store. I missed the newswires on comic book vet Eric Powell relaunching his old imprint Albatross Funnybooks to release new comics like Hillbilly, so I’m glad I had the good fortune to pick up a copy of this issue for review. Powell originally started Albatross as a means to self-publish his wacky, supernatural, noir masterpiece The Goon, a series that has been delighting audiences for decades, and may soon be adapted into an animated movie from the guys who made Deadpool. With Hillbilly, Powell demonstrates that he still has the insane ability to mash folklore and pulp storytelling into an imaginative mix, with wonderful artwork to boot.

Hillbilly starts out with a family in Appalachia of centuries ago searching for their young boy whose gone missing in the woods. It turns out the boy 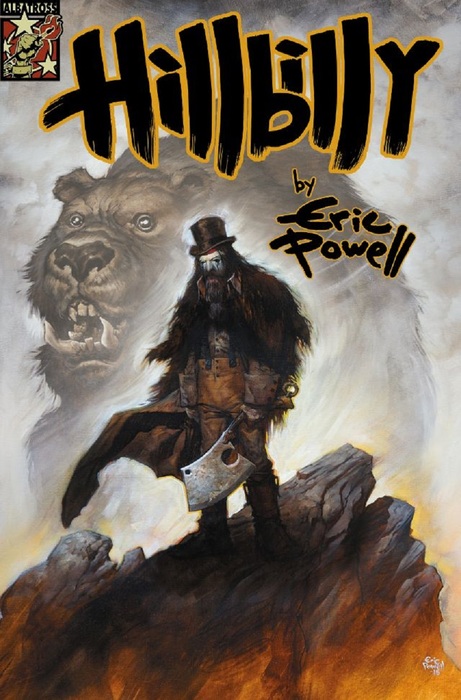 has encountered a witch, and he’s rescued by a hulking bearded man with a black, weeping scarf tied around his eyes, and a giant cleaver in his hand. The bearded man brutally kills the witch with the aforementioned cleaver. This man is Rondel, and we get to read about what Rondel’s history is. Born with no eyes, Rondel is taken in by another witch, who promises him his sight if he helps her kill a rival witch. As is typical with witch deals, she ends up double-crossing him, but not until after she gives him a cleaver cursed with satanic magic. She becomes the first of Rondel’s victims after he quickly figures out that she murdered his family.

The boy thinks this story is ok, but that he’s heard better versions of it, and usually there’s a giant bear involved too. The bear in question is Lucille, who makes an appearance in the last two pages after the boy leaves. Hopefully we will be seeing more of Lucille, who mentions to Rondel that he left out all the interesting parts of his story. This brings the interesting element of storytelling itself into the story. How reliable are the people telling the stories, and what from these stories survives the passage of time?

With this issue Powell introduces us to a new character with a rich world to operate in. While The Goon does wonderfully unique and creative things with a familiar pre-WWII noir setting, Hillbilly operates differently. There are still familiar Powell tropes like violent humor and the supernatural, but there are also many new elements by setting this in the Appalachian wilderness in what seems to be the 19th century. One big thing is something that settlers in those days had to overcome frequently: the sense of the unknown. It’s this sense of the unknown that lends this story to almost being of the fantasy genre. There is magic, monsters, witches, even a character brandishing a broadsword at one point! The cover art even evokes the work of Frank Frazetta.

Speaking of the art on top of all of these fun elements is Powell’s artwork, which manages to be both painterly and cartoony all at once. For this series so far it leans more on the painterly side, as the artwork is both beautifully illustrative and comic book narrative at the same time. Some individual panels could be illustrations to a book of Appalachian folklore. In many ways it seems like the stories Powell wants to tell with Hillbilly is a different take on Appalachian folklore with his storytelling aesthetic attached. I’m eagerly awaiting issue #2 to see where he goes next, especially since he’s bringing in his established character The Buzzard into the mix. Does this mean that Albatross Funnybooks will be Powell’s launching pad for his own universe of characters to operate in? All will be revealed in the passage of time.