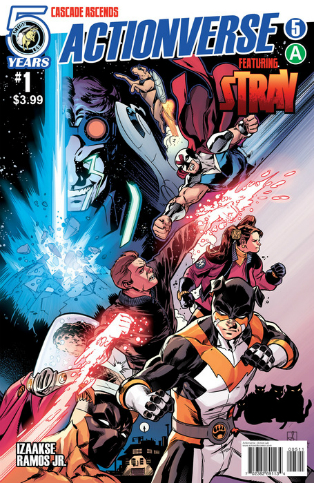 and Sean Izaakse’s Stray, Ray-Anthony Height’s Midnight Tiger, Anthony Ruttgaizer’s F1rst Hero and Shawn Gabborin and Chad Cicconi’s Fracture all have to team up to defeat the multiuniversal psychopath, Cascade. Actionverse: Stray # 1 sets the heroes on a collision course with the story’s finale.

I fell a bit behind on the series but I had to skip ahead and read this issue. Molly Danger, Midnight Tiger, Stray and the other heroes come together as Cascade obtains the last piece he needs to destroy this universe and return to his own. This is Izaakse’s first published writing gig and the comic flows. The script is action-packed and doesn’t overdo it on the exposition. Izaake’s storytelling had me up to speed

Even though I was a little behind, I was caught up to speed or could infer what happened thanks to the clarity in Izaake’s storytelling. That’s a lost art in a lot of superhero comics.

I skipped ahead because I’m a fan of Izaakse’s art and he’s jumped leaps and bounds since Stray # 4. This is one of the nicest looking superhero comics on the stands! I mention his storytelling above and I can’t sing enough praises. His art is super clean and detailed. The characters’ facial expressions are top-notch. There’s so much character in every panel. Heck, Midnight Tiger’s full face mask emotes perfectly under Izaakse’s pencil.

These Actionverse comics are a fun read! I went back and read all five issues since I started writing this review and these creators are making some classic superhero comics. There’s so much love in these books! I dig ‘em and I can’t wait to check out the next phase in Action Lab’s Actionverse.

I don’t really understand why Batman #52 exists. With the relaunch about two weeks away, it seems weird to hold on to the New 52. Maybe it 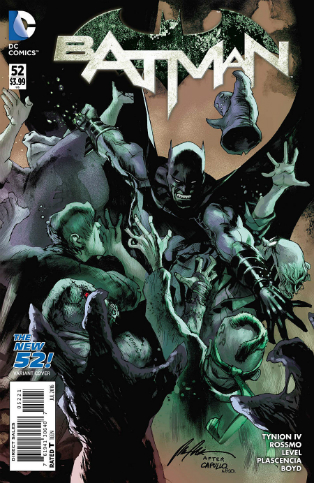 would have been a tad weird for the New 52 to end after 51 issues, but I don’t think anyone would really have minded, noticed or cared. After the very quiet night that Gotham experienced as part of Scott Snyder and Greg Capullo’s last outing together, 52 is yet another quiet night, albeit less so.

Tonight, Batman stops a bank robbery. Though the thief does steal an object of great personal importance to Bruce, the actual impact on the Bat universe is minimal. Instead, Tynion ties the one loose end Snyder left, Bruce and Alfred reconcile.

Throughout the Snyder era Bruce had an almost abusive attitude toward his stalwart butler. Bruce often didn’t seem to care or understand the psychological toll that he was exacting on the man who considered Bruce his son. Batman’s had a lack of appreciation lately, so it’s wonderful to see Bruce make amends after breaking Alfred’s heart by using what Sal Lucci called the Bat Re-Bigulator.

I was heartbroken to see the handless, broke Pennyworth desperately pleading with Bruce not to enter the Bat Re-Bigulator, and never felt like Snyder addressed this once Superheavy had ended. It doesn’t look like anything here will be consequential with Tom King on the horizon, but it’s nice to see that Tynion remembered to patch things up with old man Pennyworth before DC blows everything up again for some reason.

The biggest shame of this issue is how freaking amazing Riley Rossmo’s work is and that we’ll be without it on 6/1. Whereas Capullo had a very clean, crisp style, Rossmo feels gritty, sketched and almost acid washed. I’ve rarely wanted to get as close to the page as I did with this issue. There are so many tiny notes and they’re all eye candy.

Rossmo’s take on many of the characters defies expectation. Everyone feels simultaneously timeless and out of time quality to them. The inhabitants of Wayne Manor have an exaggerated gothic feel while others seem transported from other books entirely. It’s hard to make sense of it all but whatever, it’s the last issue and what’s actually at stake here?

You’ve Been Trumped: What I Learned About the Man Who Wants To Be King of America