Hi all, welcome to another edition of Last Week’s Comics. This week, Brian Bannen reviews Batman # 39 and Darth Vader # 2. Before that though, I’d like to mention two books coming out this week – Stray # 2 and Neverboy # 1. Friends of Unwinnable are working on them and I’m a really big fan of both books! 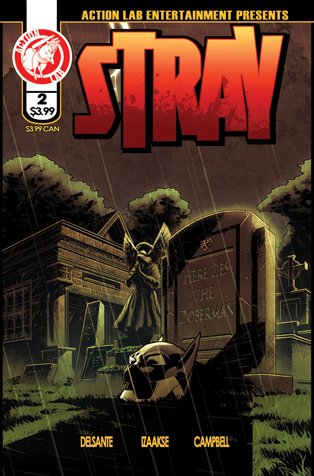 Stray is the story of Rodney Weller. Born the son of a superhero, Rodney took on the identity of Rottweiler, sidekick to his father, the Doberman. Issue 2 picks up right where the last one left off. Doberman is dead and it’s up to Rodney to solve his father’s murder. Writer Vito Delsante and artist Sean Izaakse (who I interviewed for a story in Unwinnable Weekly Issue Twenty-Three) continue to build their superhero universe by introducing us to Rottweiler’s sidekick peers and the suspects. The real joy of this issues is seeing Delsante and Izaakse coalesce as storytellers. They’re telling an action story, building character and deepening their mystery. They juggle a lot of elements from exploring the Doberman’s base to Rodney’s past to Rodney having to recover his father’s car, the Dobermobile, from some joyriding thugs. There’s a lot of meat on the proverbial bone in this comic and it leaves me wanting more. 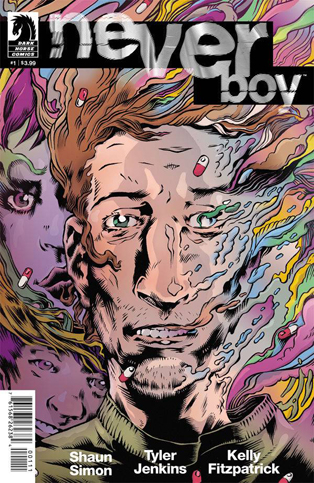 is the story of a former imaginary friend. While many people who do drugs use them to escape reality, Neveryboy uses them to stay in the real world. However, when the drugs start to wear off, he finds himself running from his otherworldly brethren.

Writer Shaun Simon, artist Tyler Jenkins and colorist Kelly Fitzpatrick take a restrained look at psychedelic comics, at least for this first issue. They’re more concerned with introducing us to Neverboy and the normal world he yearns for. While most of the issue is pretty straightforward, it slowly starts to unravel as Neverboy’s drugs start to wear off. Jenkins increasingly jagged lines and Fitzpatrick’s fading colors wash and rend away Neverboy’s world. It’s an intriguing first issue and I can’t wait to see this team get really weird. 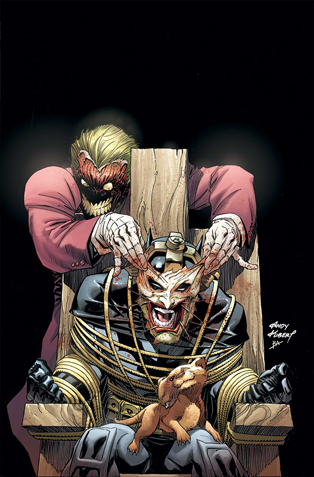 Back in the pages of Death of the Family, Bruce told the rest of his crew that he found a Joker card attached to the bat boat, but he discovered this once he got back to the cave. There was a debate about if the Joker had the ability to actually hang onto the side of Batman’s water ride, make it through his deep dive and then ascent to the cave, only to leave a place marker, and one that almost destroyed the Bat-Family.

Here, we find out it may have been true.

In what is Snyder’s darkest issue to date, Batman #39 takes readers through Bruce’s search for the truth as he tries to uncover the history of his arch nemesis to find out that maybe he’t not the mythic figure everyone thinks he is.

Snyder’s characterization of the Joker is brilliant. He’s not an off the walls lunatic. This Joker is calculating, and his whole purpose seems to be causing mental anguish on Batman. This may not be a completely new idea, but the character has never seemed more dangerous. Think of Alan Moore and Brian Bolland’s Killing Joke, and you’ll find the “Endgame“ Joker a worthy mate. While Snyder revisits the Court of Owls, the better parts of the issue are those focused around the actual character of the Joker.

For those of you who don’t know, I won’t spoil it, but a member of the Bat Family is seriously wounded in this issue — and in a way that is truly a game changer. The attack happens so quickly that you’re left in shock for the rest of the issue. I’m actually surprised DC let Snyder get away with it, but maybe they too saw the power of the moment and decided to not get in the way of one of the best Batman writers ever.

The end of the issue is pretty stellar as Joker displays some of the spoils he took from the Batcave in a parade reminiscent of the Joker’s parade in Tim Burton’s Batman movie. But Bruce’s actions — the lengths he goes to in order to try to defeat the Joker – are most noteworthy. I’ve heard the term “uneasy alliance” but I’ve never seen it in action before. Here, Batman turns to a surprising group of people to help him take back Gotham in what is an impassioned but not lost plea to save the city.

As always, Greg Capullo is there to render the horror that Snyder writes. Batman’s rogues have never looked better, and the final shot of the Joker is chilling and scary. He loves to draw the Clown Prince of Crime in profile, but focusing mostly on the mangled side of the Joker’s face. It makes for a great aesthetic, and one that helps sell the darkness of the character.

Capullo has a fluidity to his art that helps convey the action of the comic (and there’s a lot of it), but he just as quickly can hold back on the art and create mood heavy imagery. Visually, it’s very striking and the darkness of the issue is made palpable through Capullo’s art.

“Endgame” is a fantastic story line and the aura Snyder has built around the character is only getting thicker. It’s clear that he’s manipulating everything, but we’re no closer to understanding his goal or his motives by the end of this issue. If anything, Snyder leaves us stranded with a number of loose ends dangling and the wait to find out the answers is going to be maddening.

Bouncing back from Death of the Family and Zero Year, Scott Snyder has found his groove again and the result is more terrifying that I could have imagined. He’s definitely cemented himself in the Batman pantheon, but “Endgame” could be not only his best Joker story, but his best story yet – period. 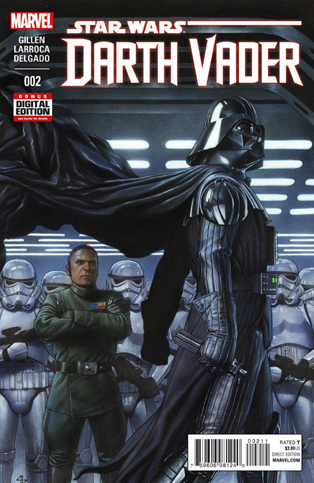 Where the first issue of Darth Vader felt like an awkward, clunky attempt at imitation, this issue feels a bit more real. Kieron Gillen pens a tale that clips along at light speed with Vader playing the role of lackey to Grand General Tagge, one of his non-believers from the Death Star. But as Gillen shows, Vader is good at manipulating others by pretending to be manipulated himself.

It’s easy to forget George Lucas botched character history when reading something this good. This is the Vader we know from the original trilogy, and under Gillen’s pen he’s the sneering, visceral force we come to know him as in Empire Strikes Back. Gillen captures Vader’s voice pretty solidly, and the dialogue echoes his stern, cold delivery.

This issue is compact enough to feel like an issue on its own rather than part of a bigger plot. The main story — involving Vader trying to learn more about a mysterious young farm boy — is pushed aside for a straightforward tale of a ship siege, but the ship seems to have information valuable to Vader. What is it? We’re never told, but the back and forth between the ship raid and the droid data download is paced perfectly with a nice back and forth that builds up the tension to the final cryptic page.

Plus, Salvador Larroca’s art is beautiful. There’s a polish to Vader’s costume that makes him look all the more imposing, and the action sequences are drawn with slick precision. And we get to see droidekas! They return for a brief foray into the world of battle only to be defeated pretty handily by the dark lord of the Sith, but their presence is pretty exciting (even though they’re new trilogy creations). I get that the artists have an already created world to work with, but they still render their art in glorious detail.

Darth Vader #2 is a much better issue than #1. Marvel is definitely taking a risk with the series as it could undermine everything mysterious about the character, but so far Keiron Gillen has succeeded in keeping the mood of Vader alive and well. He’s still just as imposing as ever, and we also see his cunning and sharpness displayed as well.

I hope that every issue is this solid, and Gillen sets the bar pretty high for every other Star Wars writer.