Right off the bat I just want to admit that I’m not very familiar with the Dragon Age world of video games. I’ve seen other people play it, I believe that my roommate has a copy of it on the shelf, I just never got around to it thanks to Skyrim being the only fantasy RPG game in my life these last few 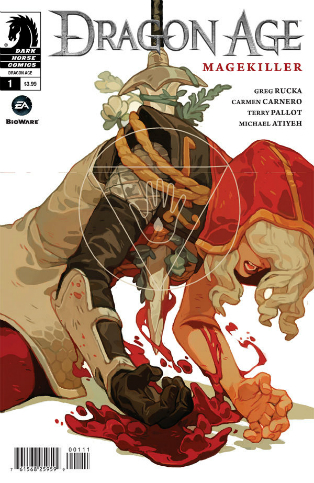 years. That said, there’s no need to be familiar with Dragon Age to enjoy this comic. The world of the game colors this narrative but it stands on its own as a fun fantasy tale told in a way that only Greg Rucka can tell it.

I mentioned in my review of Black Magick #1 about how well Rucka merged the supernatural with police procedural in that comic series, and he pulls off a similar trick here. I guess since my familiarity with his work has always been with more of his crime related stuff, I never realized how well he can write fantasy, magic and the supernatural. With this series we follow two main characters, Tessa and Marius, who hunt and kill mages, as the title suggests.

Tessa is a tough fiery woman who’s learning the ropes from the quiet and stoic Marius. She provides the narration for the issue, and it makes for a great framing device for readers being introduced to this world and its characters. Basically when magic users get too out of hand they’re hired to eliminate them. In a lot of ways it incorporates a fantasy and police procedural angle, except this is a pure fantasy world.

The opening of the series does a good job of setting this up, as the main characters take out a apostate blood mage. Artists Carmen Carnero and Terry Pallot show right off the bat that they can handle the visual flow of fight sequences. They are also are not shy about providing elaborate backgrounds to fully flesh out this world, like entering a room in an RPG and taking in what’s on the shelves. There’s also wonderful visual effects to convey the magical action of this series.

One thing that really stands out about this issue is how well the writing and the art blends. This is a good collaboration where the two parties really understand each other. Rucka is excellent with his character work, as always. The scene where Tessa interacts with the non-responsive Marius as they wait for another contract is a fine example of this, and adds layers to the characters. There’s even a great humorous beat where Tessa hands Marius what looks to be a version of a graphic novel that she mentions has some sexy drawings in it, which Marius quickly grabs from her. It’s character moment like these that give me confidence that this will be a fun series.

The only mark against this issue: does it stand out? That really depends. If you’re a fan of Dragon Age you’ll enjoy this little side mission in the world, and if you like fantasy and the writing of Greg Rucka like me then you’ll also enjoy it. If not, would you just pass by the rack, assuming it was a licensed piece of marketing?

I’m curious to see where the main plot is going, although I feel that the twist reveal at the end of the issue is kind of obvious. It’s always interesting to see how property adaptations like this go, because you know on some level that game developer Bioware has some input into this. What effect this input will have on this series going forward remains to be seen, but for a fun fantasy romp with some great character work, art and dialogue you can’t go wrong with this issue.

Thanks to Dark Horse Comics for providing us with this advance copy for review, Dragon Age: Magekiller #1 is available in stores today!

Somehow the previews for this slipped under my radar. What a pleasant surprise to randomly come across on the racks! This is pure switch-off-the-brain-fun where some comics creators basically mixed up the peanut butter and the chocolate and let some iconic characters play together. There’s not much to say here that the title already doesn’t: the Turtles are in Gotham City and cross paths with Batman. Shredder and the Foot Clan are around 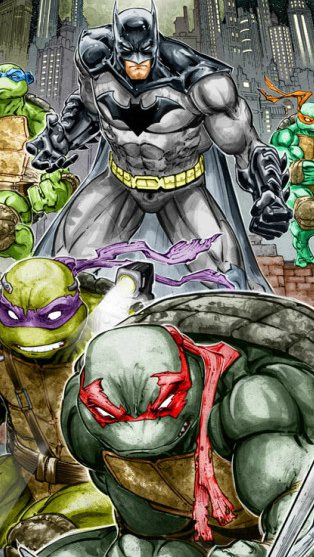 and so is Killer Croc, who’s trying to carjack the Batmobile. I can’t wait for the inevitable showdown between Batman’s most TMNT-style villain and the Turtles!

It’s amazing that this took so long to happen. With all of the dabbling that Batman has done in other universes, it seems like the power of brands with huge fanbases would have mixed him up with the Turtles earlier. This is one of those things like Archie Meets KISS where it feels long overdue. Sure Batman and the Turtles are slightly different in tone, especially after what decades of cartoons have done to the Turtles. But when you think about it, the two brands share one strong similarity, and that’s Frank Miller in the 80’s.

When Miller reinvented Daredevil and Batman in the 80’s and brought a certain rainy noir sensibility to the world of comics, two dudes named Kevin Eastman and Peter Laird decided to riff on it with a reverential, if not somewhat parodic, take on the emerging trend. I’ve recently revisited the first batch of Teenage Mutant Ninja Turtles issues, and the similarities to Daredevil are especially strong. But, we’re talking about the Foot, not the Hand, here.

It seems like Tynion and Williams take all of these factors that I just mentioned into stride, and it makes for a fit that’s not as awkward as you’d think. Sure it looks a little silly, but that’s the point. This isn’t the Batman of today so much as the Batman of the late 80’s, when the Turtles first burst onto the comic book scene. Freddie Williams II draws big characters bulging with muscles, and echo the ridiculous extreme qualities of that era. It’s a real throwback that could faceplant if done wrong, but Williams pulls off this move with aplomb, and it results in visuals that are totally awesome.

The plot is as silly as you’d hope. That the Foot Clan are stealing seemingly random parts for a machine from various labs. Batman is investigating the ninja heists, and eventually takes on a group of Foot ninjas, which brings him face to face with Shredder. Shredder escapes with a smoke bomb and Batman is left to track down a group of metahumans who survivors of the Foot lab attacks say look like giant Turtles. I love how every so often Batman simply mutters “Turtles” as he gets deeper and deeper into the case, like a cranky old man pissed off that he’s being dragged into this ridiculousness. The story and art play this as deadpan as possible though, and it’s a mix that I’m eagerly on board with.

At this point, the Turtles have been around for thirty years, long enough to have gone through many iterations over the years. From the original angry foursome drawn by Eastman and Laird to the more friendly cartoon and live action movie versions, to the jacked-up Turtles of the Image Comics run and most recent live-action franchise, they have gone through as many changes as Batman in half the time.

Much like Batman, these versions have all been accepted and woven into the rich tapestry of their current stories. If you look at this new TMNT comic, you’ll see that they’re inspired as much by the groundwork laid down by Eastman and Laird as they are by what has come since. Even the current cartoon allows for all of this to be embraced. It’s the same with Batman cartoons, and the recent run Grant Morrison wrote that made everything in the entire run of the Batman comics canon, while also pushing the series forward with a new vision. These are moldable characters where new interpretations are always welcome.

This is a series that’s meant to put a smile on the face of anyone who reads it. That it succeeds is a home run for comic books these days, because I find all too often that fun ideas lead to an anticlimatic ends. This on the other hand seems to be the Batman and Teenage Mutant Ninja Turtles crossover that I’ve been waiting to read for 25 years.