Another stellar issue of Beasts of Burden featuring comedy, tragedy, the supernatural and talking animals. “What The Cat Dragged In” focuses on the cats of Burden Hill as they accompany the mysterious witch cat Dymphna to the house of her former mistress to recover some things. According to Dymphna, the house is impenetrable. They recruit a raccoon named Hoke to let them in with his fancy raccoon hands. Since this is a cat matter they don’t ask for assistance from the dogs.

It’s quite the world that Dorkin, Thompson and Dyer have set up in Burden Hill. This one-shot explores 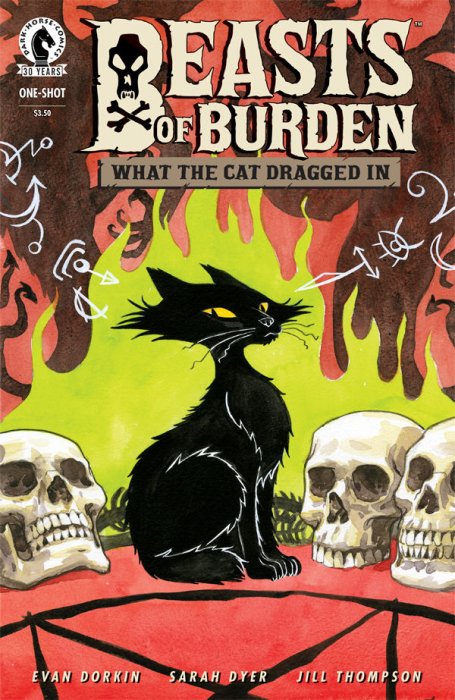 another element of it. Often the dogs take more of a center stage so it’s nice to see things from the feline perspective. I never stop thinking to myself how wild it is that this is written by the same guy behind the very tonally different Milk and Cheese comics, or The Eltingville Club, yet the depth of these stories puts it in a similar place as the Hellboy comics. By the end of this issue you will have to be among the dead if you don’t feel anything from the painful resolution of the issue.

Jill Thompson’s art is stunning as always. The colors combined with the amazing details almost make you feel like you’re watching the greatest animated film ever. It’s a tough balancing act to give anthropomorphic animals enough expression and character before teetering over into cartoon territory, but Thompson pulls it off wonderfully. The animals retain a natural look which contrasts sharply with the supernatural elements they encounter.

In no time at all you know where Orphan and Kid are coming from (cats dragged into this situation), and how Hoke really respects his mother, because he does not want to be there at all and expresses his disgust in very vocal comical ways that Evan Dorkin does oh so well. When it’s revealed why I’d wager most of the more capable human readers wouldn’t want to be there either.

It appears that Dymphna, a former rival of the group of animal buddies, had summoned a demon called The Harrow to enact her revenge on the group. When she realized how in over her head she and her coven was, she left him bound into the basement of the house of her mistress. When she returns with the cats and Hoke, it’s plain to see that horrible things have happened in the once cozy house; it’s rapidly rotting and torturing the poor cats left behind. The things Dymphna came for are actually her family, and she is trying to save what is left of her coven from this evil toxic creature.

In many ways this issue is about the toxicity of revenge, and like in many past issues of this series the importance of family. When we let rage and hate dominate our lives, we summon an evil Gatorade-colored creature ourselves, one that only destroys those that we love. Dymphna unfortunately learns this in a harsh manner by the end of the issue, and in ruin now must rebuild. This is some heavy stuff for a talking animal book, which is why I highly recommend Beasts Of Burden: What The Cat Dragged In.

Detective Comics and Detective Comics have been in a holding pattern lately. Pauses like this usually indicate change: new creative team, new major crossover event, new TV show or movie to promote. We are on the verge of “DC Universe: Rebirth,” yet another promise of a major shift and restart. I was peripherally aware of the “Rebirth” fooferall, but since I try to avoid solicitations, I’m always the last to know what’s going on. That’s never stopped me from going off, half-cocked, and slamming the books I read; complaining about the editorial stifling of authors and artists, threatening to stop buying titles entirely, and what have you. So as of this writing, I give up and will gladly read solicitations.

Will reading solicitations improve my comics reading experience? Will I bitch less? Will my limited funds magically be directed toward more worthy titles? Will I still compulsively buy titles long after I’ve gotten any real excitement out of them? Here we go. My OCD is my real problem with buying comics. I feel I’m not alone in this.

I’ve gone through many stages in my comics buying life, starting and stopping every few years, but I always came back to Detective 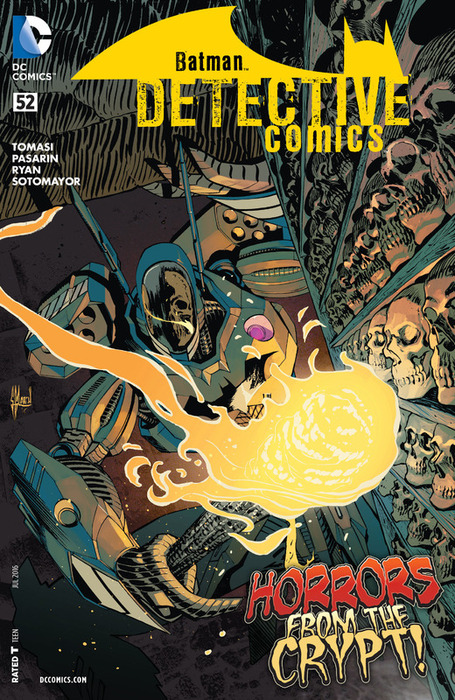 Comics and Batman. Batman has been strong for the past five years that I’ve been actively buying, so there has to be a major downturn with the new creative team to make me stop buying that title. Detective Comics on the other hand, hasn’t even reached fair-to-middling in my eyes since… well, since I don’t know when.

Detective issue #52, and #51, part one of this arc, are garbage and a waste of $3.99 (plus tax) even if you ignore “Rebirth.”. I kind of felt that DC was waiting to align all it’s stars for something big. I didn’t really even need to use my super powers of Skepticism and Cynicism to see that.

The “Our Gordon at War” short arc is one last adventure for Jim Gordon using his Bat-toys. He’s not Batman anymore, he’s not Commissioner Gordon again just yet, but he wants to go out and play one more time. One of Gordon’s old Marine buddies shows up at his doorstep, frantic about a secret that their squadron buried in the Afghanistan desert back in the day. Then said buddy gets offed by some mystical catch phrase shouting caricature. Our adventure begins!

So what did Gordon and his fellow Marines bury? Did they kill someone they shouldn’t have? Did they bury a secret about the terrible things the Marines did (and do daily) in Afghanistan in the name of U.S.-style justice? Nope, turns out it’s something more sinister, something part Mola Ram, part Brendan Fraser Mummy. It is a mummy, wrapped in bacon!

I really enjoyed Peter J. Tomasi’s writing on Batman and Robin and his other work in the greater Bat-verse, but I have a hard time really getting past the clownishness of “Our Gordon at War.” I get a very ’70s/’80s feel from this story – it’s short-sighted, contrived and retrofits some major life details a character has never shared before. It’s also easily forgetful.

Also, the above-mentioned big bad is wrapped in bacon. (Okay, it’s not exactly bacon. The mummy monster is wrapped in strips of charred human flesh in order to gather strength. Bacon would probably smell better.) Spoiler alert – the Marines win! Putting smarminess aside for a moment, here’s a real question: in the context of a Batman story, are we okay with Gordon being okay with the Marines killing the bad guy?

Let’s find some positives about Detective issue #52. Fernando Pasarin is good at capturing the physiques of the characters. His figures are muscular, lean and tight, not over-the-top steroid/body builder types. Pasarin’s backgrounds are detailed without being too busy. Colorist Chris Sotomayor is a good partner for Pasarin. He makes the underground fighting scenes viewable yet still dark, something difficult considering the evil mummy’s lair is only lighted by a few torches and some explosions.

But that’s not enough to make me happy. There are plenty of other titles to check out, companies more worthy of your dollars than DC. I was able to say goodbye to the X-Men, so maybe it’s time to do the same for Detective. If “Rebirth” is really going to be “bringing back something that’s been missing” (in the words of DC Chief Creative Officer Geoff Johns) then what they really should have done was have all the heroes go back to wearing their underwear on the outside.

Issue #11 saw the close of the Zodiac arc, a conflict that continued to be somewhat interesting while ultimately overstaying it’s welcome. Now Dan Slott and Giuseppe Camuncoli are progressing forward with Augustus Roman, aka Regent. Recently introduced in the Secret Wars event via Amazing Spider-Man: Renew Your Vows, Regent has the ability to tap into the abilities of imprisoned supers through a suit he wears.

During the previous arc, sprinklings of Regent’s presence were seen as he orchestrated some events and added to his arsenal behind the scenes. 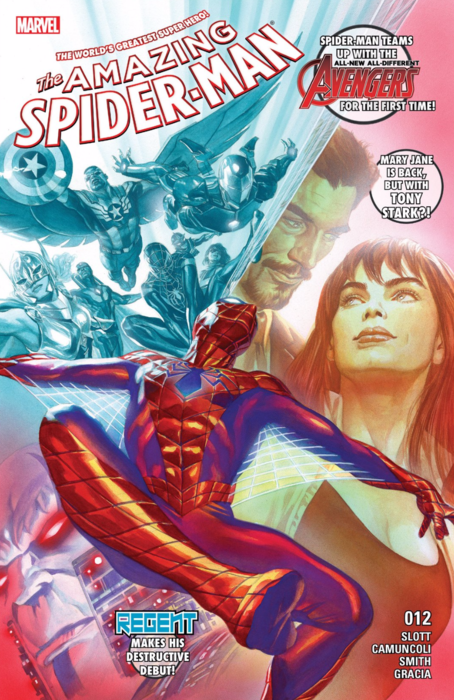 Still, it’s difficult to be excited about this conflict considering Renew Your Vows was merely a few months ago. Roman himself is also a very uninteresting and underdeveloped character, something that hasn’t changed much since Secret Wars.

As drawn out as Spidey vs Zodiac got over 11 issues, Slott brings a long desired, far reaching, and competent Peter Parker and Spider-Man. We also have a concrete supporting cast around Spidey and Parker Industries, including the strange voyeuristic intrusion of Otto Octavius. In this new arc we get another inevitable cameo with Tony Stark joining the fray, and it seems he’ll be sticking around for the remainder of the Regent arc.

The reunion of Parker, MJ and Osborn (now taking on his mother’s maiden name, Lyman) is surprisingly dull. The addition of Stark to the gathering does elevate the gathering, but things pick up more significantly when trouble arrives. With the evolution of Parker’s in the Marvel Universe as a businessman and tech mogul, naturally the Stark/Parker comparisons have run rampant in these new books. #12 finally has the two working side by side and the banter is at its finest with the two sharing panels.

#12 is a welcome turn that’s only slightly hampered by dialogue that has the history to bear more interesting fruit, but doesn’t, and the looming, uninteresting villain in Regent. Regardless of those issues, Slott is shaping a cool place in the world for Peter Parker and artist Camuncoli is bringing it to life with some amazing art. Amazing Spider-Man continues to be one of the most impressive runs after Marvel’s reboot via Secret Wars and things will hopefully only improve from here.