When the frenetic gameplay of WarioWare, the dark humor of Fargo, and the aesthetic of Dragon Ball and Pokémon combine, Knuckle Sandwich emerges unscathed from the explosion, sunglasses lowered. It’s a bizarre amalgam that works, as fans made evident when they funded the game’s Kickstarter last month in just over 12 hours.

Its story begins when our hero, insert-your-name-here, moves to the metropolis Bright City on a quest quintessential to the millennial experience: desperately searching for employment. A string of failed attempts later, he lands a job at a sketchy diner after its belligerent owner runs all other employees out. After a back-alley knife fight turns deadly during the protagonist’s shift, his boss tries to rope him into a meat-selling scheme that would make Sweeny Todd proud, and developer Andrew Brophy promises that’s only the beginning of our hero’s misfortune.

While playing, it’s immediately obvious why Knuckle Sandwich secured funding. Brophy infuses personality into the simplest of interactions, from the way you send multi-color debris flying when you hit trash cans to the main character’s surprise and rebound animation when you run head first into an object. Inspecting the most mundane objects yields witty observations in the same vein as classic point-and-click adventures. 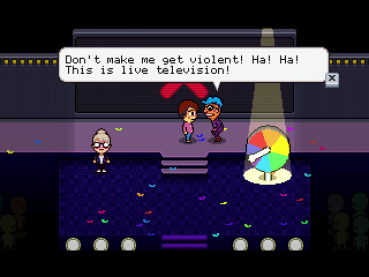 And while most of the jokes land their mark, Knuckle Sandwich excels most in its tongue-in-cheek nods to the gaming industry. When spinning a wheel game-show style for your potential new job, “Writing about videogames on the internet” pops up. The peppy music skips a track, the host’s expression sours, and he demands you spin again – no, no, no, you don’t want to do that! The game takes a moment to laugh at itself as well, such as when an NPC remarks about a demo he’s playing that’s good but too short in his opinion. Without your input, the protagonist turns and shoots a pointed look at the camera a ’la Jim from The Office. Even the game’s title acts as the demo’s final punchline.

Even its gameplay seeks to capture that same silliness and singularity. In crafting Knuckle Sandwich’s mechanics, developer Andrew Brophy sought to trim the fat from traditional RPGs.

“I wanted to create an RPG that doesn’t feature the things I dislike about the genre (like grinding, puzzle elements, having numbers all over the screen, hoarding items, etc.),” Brophy said on the game’s Kickstarter.  “So the bulk of the game is played out by completing wildly different minigames.”

In the demo, these mini-games largely follow the types of jobs the protagonist samples after each spin of the wheel. Landing on “Dancer” triggers a rhythm mini-game, or a vertical shoot-em-up for “Space Cleaner” (don’t bother guessing what that is, even the host didn’t know). And while battling enemies involves the same turn-based structure of typical RPGs, executing certain attacks and successful dodges require well-timed input. Or, in some cases, just mashing they keys as fast as you can.

All of this to the tune of a jazzy electronic music overflowing with synth funk that sounds like the musicians behind Seinfeld and The World Ends with You got together for a jam session. “Good music is probably the most important thing to me when it comes to videogames,” Brophy explained, and so he recruited six musicians to compose the game’s soundtrack.

It’s all a far cry from Knuckle Sandwich’s humble beginnings as a one-hour Flash game back in 2013. After Adobe began killing the software a few years later, Brophy brought it over to Gamemaker Studio where the idea began to expand into a full-length title. Already considered one of the most anticipated indie games of 2019, Knuckle Sandwich currently sits at 200% funded with two weeks left in its campaign.

“It is very hard making a remarkable videogame,” Brophy wrote on its Kickstarter, “but I have put so much of myself into this one, so I think it will be worth it when it’s finished.”

Umiro Is The Relief of Recovering Lost Memories
Previous Post

Rend Wants to get the Team Back Together