Did anyone check out the Apple App Store last weekend? There was a temporary category called “Have Fun Helping the Planet” in celebration of Earth Day. The proceeds from certain in-app purchases went to the World Wildlife Fund. The WWF is a great organization, and one of the highest rated charities among their peers on Charity Navigator. However, when among the top three applicable games are SimCity: Build It, Jurassic World: The Game, and Kendall and Kylie it’s hard not to be reminded that Earth Day is regarded as a C-List holiday.

For example, SimCity: Build It is a game about paving paradise and putting up a parking lot. Though the Earth Day update for Build It is about building a city in harmony with nature remember, that cities are fundamentally in opposition to nature. Building a city requires disfiguring nature to a completely unrecognizable state. True there are sustainable practices and ecologically friendly ways to build cities, it is farcical to think that by playing Build It anyone is helping the environment. Clicking the buy button (and generally only buying exclusive WWF items) is the only thing remotely doing anything to help the planet in SimCity: Build It.

Jurassic World: The Game also suffers in the category. The lessons of this series have always been the same two things. First, don’t underestimate kids. Second, meddling with nature never works out. Why would this game make any kind of natural partner for the WWF and Earth Day? Aside from all the moral and ethical questions about zoos, remember that the Jurassic movies have always been about converting lush untouched islands into amusement parks.

What is most frustrating about these two games is that they either ignore environmental impact, or only regard it as a means to profit and success. Ian Bogost, a video game theorist, called this “procedural rhetoric”. He argued that the rules and systems which govern a game (and more specifically success vs failure in a game) are instructive. City/theme park builders fundamentally view the environment a different way when the only way in which they interact with it is based on property values or the amount that someone is willing to spend.

Consider Vincent Ocasla’s Magnastani in Sim City 3000. Over the course of four years Ocasla sought to create the absolute largest city possible (just over 6 million residents) in the game. In an interview with Vice, Oscala states that “there are a lot of other problems in the city hidden under the illusion of order and greatness – suffocating air pollution, high unemployment, no fire stations, schools, or hospitals.” 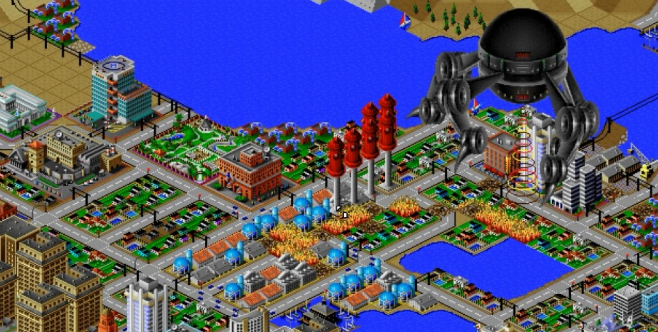 Nature, green space and conservation never come into the mix. Though this isn’t the same Sim City as the one featured on App Store, there are still similarities. For a long time, the most efficient way to gather money and resources was to demolish low quality buildings over and over again. In doing so it became impossible to build basic amenities leaving the few residents in squalor until they are evicted.

Oddly, the Kendall and Kylie Jenner game is the least offensive, because they do not fall into this procedurality trap. Though they’re symbols of consumerism and a culture of vanity, there’s nothing intrinsic to their game that is actually antithetical to conservation, Earth Day, and the protection of animals and nature.

However, I’m not prepared to say that the bar for “helping the planet” is “does not actively hurt it.” Instead, what Kendall and Kylie shows is that we can’t take issues like conservation, sustainability and planetary health seriously. Or we at least cannot take them seriously enough to distract ourselves long enough to do anything other than drop a few dollars to the WWF in return for avatar hats.

There’s nothing especially offensive about the WWF, Apple, EA or any other group partnering the week of Earth Day. What is scary is that the Earth Day message is the polar opposite of the themes of many of the games that have been partnered. We should be a little suspicious and perhaps even a little angry that while countless games are able to save humanity through force, very few of them give us the chance to save the world from its greatest threat, ourselves.

Office of the General Counsel – Episode One & Two