Last week was a helluva week for good comics! Black Panther # 1, Batgirl # 50 and Interceptor # 4 just scratch the surface of what the kind of quality published last week. Maybe it’s because I’ve been away from most comics for the past two months but I been this excited about comics coming out the same week since X-Men # 1 and The Toxic Avenger # 1 hit the stands!

However, there is one comic that came out this week that I was looking forward to more than any other, and that comic was The Fix # 1. The Fix is the 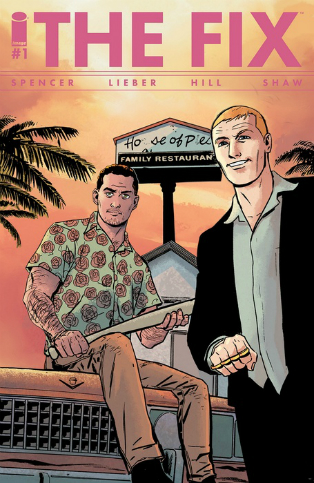 kind of comic I want to be around for a good long time. Nick Spencer and Steve Lieber floored me with Superior Foes of Spider-Man, and while it saddened me to see that book go, I’m happy it led to them creating this series!

Spencer and Lieber throw some damn funny curveballs in this book. The issue kicks off with a narration about crime in the twenty-first century and how it isn’t as lucrative as the old days. The speech is juxtaposed with images of barely post-pubescent Russian hackers at their computers and subsequently partying with other people’s money, then other images of some old fashioned violent mugging. The scene dovetails into one of the most inept and hilarious robberies I’ve seen in a comic – two masked thugs rob a nursing home. Of course, this all leads to the reveal that these are our two main characters – Roy and Mac. Roy and Mac also happen to be crooked cops.

Spencer and Lieber take time to build the world around Roy and Mac. We get to see their precinct and we get to meet some of their cohort, including the local crime boss, Joshua. Joshua is a treat. He’s a stay at home father who has a taste for organic food and locally sourced dismemberment. He’s the kind of guy you’d want to punch at the Whole Foods if he weren’t so scary. It turns out they owe Joshua money.

Spencer and Lieber made me care about losers like Boomerang, Speed Demon and Shocker in Superior Foes. I love that book, but Roy and Mac are far more interesting and their world is much more grounded and relatable. The Fix is a perfect blend of crime, character and comedy. Buy it! If your store is out, don’t fret, just have them order you the second print and while you’re at it, pre-order # 2 – they come out the same day.

Let out an “ALALALALA”, because Xena is back! In comic book form at least. While talk of a remake TV show is still brewing, it appears that it won’t be with iconic Lucy Lawless in the lead role. The late 90’s hit that changed the TV game in many ways. Xena was a trendsetter, featuring more women
in lead roles, and in a Comic Book/Sci Fi/Fantasy setting no less. It’s really is amazing to look back at a 20 year old show, now in syndication, and see that it wasn’t based on pre-existing characters with an established fanbase. Pretty amazing considering it was originally a spinoff of Hercules: The Legendary Journeys. 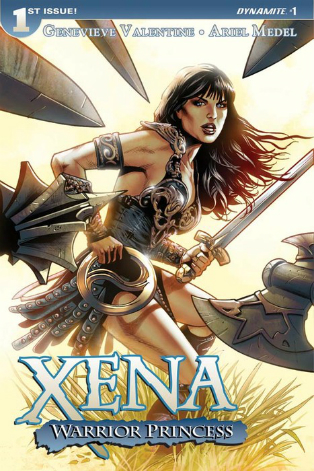 Now, out of the blue, is a new series establishing right out the gate that it’s picking up where the show left off. This first issue is fun, but definitely spends a lot of time setting up for further adventures down the road. The potential is much appreciated.

We learn in the preface that Xena and Gabrielle have just risen from an enchanted 25-year sleep due to Ares keeping them safe from the wrath of the surviving gods. Due to their actions, half the pantheon is dead, and the world is now the world under the control of Rome. Genevieve Valentine gives us a mystery right off the bat by showing us Gabrielle stumbling across Xena’s dead body; killed by her famous bladed Chakram disc, the time caption reading “Nowhere… yet”.

This’ll remain a mystery for now. We’re then brought back to a Xena and Gabrielle’s adventure in Illyria, where they rescue two thieving children from an angry mob. This leads to them getting involved in an ongoing series of battles between Roman soldiers and a rogue group of fighters called The Harpies.

Valentine does a great job keeping the dialogue snappy and the action flowing in these sequences. The show always managed to strike a balance between drama, action, high fantasy and comedy so well, and this comic series seems to be aiming to do the same. Valentine also writes a lot of television coverage for the AV Club website, and her ability to channel what makes Xena work shows that she’s been studying the source material.

Art-wise Ariel Medel is also on point. It’s always a difficult thing when a comic book features characters based on actors, and he expertly conveys the characters in this book as their own thing. At times the art is jarring in a facial and body composition sense, but it works more often than it fails. Again, it’s tough because Lawless embodied the character so much that it’s hard not to draw the comparison when looking at the art. Medel is great with drawing groups and splash pages of action though, and works background scenery into almost every panel; something that’s important in a comic that incorporates mythology and sometimes history. A story where we’re supposed to be immersed in another world that’s still vaguely familiar.

It’s tough making comic book continuations of TV shows, especially ones with flavor as distinct as Xena. This first issue shows that this comic is capable of doing that, even if we’ve only caught a glimpse so far. I’m curious to see an adaptation of the show that can strike the balance that Xena: Warrior Princess did regularly: memorable characters interacting with characters from legend and history, that also manages to be action-packed, full of adventure, not afraid to be fun and humorous as well as being socially progressive. The adventure begins here!

Kyle Higgins and Hendry Prasetya’s Mighty Morphin Power Rangers might be shaping up to be the best comic adaptation of a campy 90’s TV show based on a Japanese TV show ever. That might not set a particularly high bar, but MMPR is a seriously fun book that keeps reverence for its source material and never flinches.

MMPR #2 continues two different threads that the show touched on. First, that Tommy, the Green Ranger, did not immediately and fully acclimate to being on a team with the other five Rangers. Second, that Rita Repulsa would want the Dragon Coin (the thing that allows Rangers to morph) back. Though the show did dedicate a fair amount of time to these two ideas, Higgins has found ways to make these feel not only fresh, but distinctive.

Unlike in the show, Higgins isn’t afraid to detail what the Rangers are doing outside of shoehorning American footage into a Japanese TV 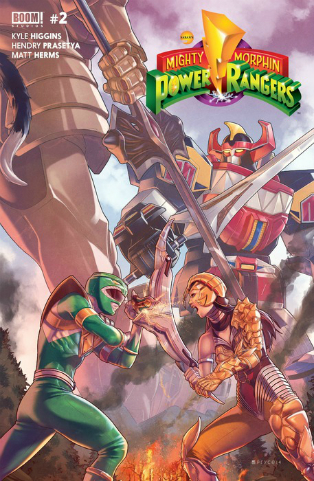 show. We see Tommy at home, we see Billy and Trini doing diagnostic work on a Zord, we get knowing looks and telling conversations that color and shape the characters in ways that the source material was never able to do. Unrestricted by budget and shooting schedules, the characters are more fleshed out than they’ve ever been.

Prasteya’s artwork also does wonders to breathe new life into the stagnant franchise. For the first time MMPR has a coherent, cohesive art style that works 100% with its narrative. Everything feels meaningful, and in issue 2, Prasteya shapes the world with glimpses into the new environments of Tommy’s bedroom, and the innards of the Dragonzord. While these may seem like mundane additions, they make the MMPR universe feel fuller than ever before      .

My only major quibble is that the Rangers seem to be very muscular in their Ranger forms. The characters never really seemed like “ordinary teens” (my school and rec center never had regular martial arts exhibitions) Prasteya’s work makes them seem particularly extraordinary. Not only that, but I have a tough time seeing Billy as a “nerd” here. Again, not that any of main cast ever seemed like lay people, but there’s almost too much polish put on them. Any awkwardness has been buffed out in favor of a more muscular, sexy cast.

Ultimately, the series has never felt more complete. Many of the characters overcome the things that held them back. Trini has never felt more whole as a character. Working with Billy feels like a natural pairing off of the original cast, and the fact that she has significant lines is a coup in and of itself. Billy has always been the technical whiz, but this was never really explored outside of the command center. Jason now proudly works with kids who look up to him. Kimberly isn’t just a damsel and most of her valley girl tendencies have been boiled out by the team. Zack is the only one who hasn’t had his character beefed up in this way, but time will tell.

Probable Tropes in Star Ocean 5, In Order From Most to Least Likely