The title says it all – this is a book about the Avengers as a worldwide organization, each group comprised of different members and dealing with a different threat. For Avengers amateurs like me, this is a deep-end dive that smartly introduces readers to its extensive cast of characters, while at the same time setting up the need for a global police force. 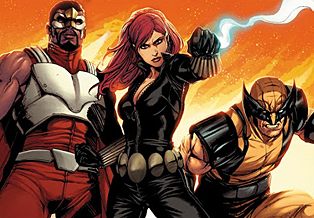 Did I mention there’s a giant monster with a city on its back?

The uniqueness of the title is evident from the get-go, as writers Jonathan Hickman and Nick Spencer give readers what they need to know to establish a level of comfort and indeed, this opening could serve as part of Marvel’s Avengers movie (complete with Maria Hill as the commanding force on the deck of a Helicarrier).

But from here, Hickman and Spencer are unapologetically diverse (there’s an Avenger named “Smasher”?), and the comic is better for it. They give each group its own minor role, yet each conflict ends up being much greater than originally perceived. The split narration makes for a great climax. And Hickman and Spencer deftly bounce around between the characters, keeping the story fluid despite the size of the cast.

The most entertaining part, though, is the back-and-forth banter between characters. Hickman and Spencer keep the tone light despite the scale of the catastrophe facing the heroes, and they do so through punchy dialogue and buoyant humor. They definitely seem to be borrowing the feel of the Avengers movie, and why wouldn’t you turn to something so successful? It clearly pays off here as well.

As for the art, I love Stefano Caselli’s work on Amazing Spider-Man, but here his style isn’t as polished. What I mean by this is that the finishes don’t have the same luster seen in his work on other titles. But his character design and set detail is impressive, especially in his portrayal of the team outside of the Helicarrier. His best work is the mood-heavy drawings, the ones that rely on shading for effect. The riotous city of Madripoor, for example, is captured in glorious detail.

Avengers World is promising, and with this kind of talent, why wouldn’t it be? Something bigger is on the horizon (as evidenced by the final page), so I think we’re in for a global throwdown. With so many tricks up its sleeve, S.H.I.E.L.D. has more than enough heroes to aid the cause, and it’ll be fun to see how Hickman and Spencer utilize them. 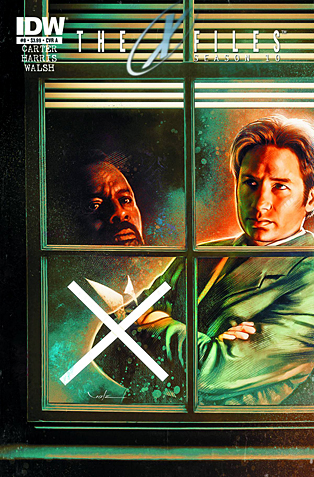 This series just keeps getting better and better.

Joe Harris’ penchant for dipping back into the mythos continues as he resurrects Mr. X, the enigmatic and intense source who appears whenever Mulder tapes a big X on his apartment window. Don’t get too excited, though. Mr. X is shown mostly in flashback save for the last page of the issue, which, in typical X-Files fashion, ends with more questions than answers.

The story is structured solidly, bouncing back and forth between a number of odd and secretive occurrences involving Mr. X (as well as Cigarette Smoking Man and Deep Throat) and a mysterious message that brings Mulder back to his old apartment and his previous encounters with Mr. X. Harris once again shows the depth of his X-Files knowledge, and the puzzle he’s building is more than worthy of the show.

My one critique would be in Michael Walsh’s art. The finishes in the flashback sequences make the visuals appear muddled and smudged. Furthermore, faces are poorly illustrated to the point where normal details – eyes, noses, mouths – are no more than thinly sketched designs without any real composition. Walsh is definitely a talented artist and has proven his worth in previous issues, but this looks like it was hastily thrown together without time for any finishing touches.

The inconsistency in the art aside, the issue does many things well. It builds the mythos, creates an engaging puzzle and kicks off the next arc with a great cliffhanger. I couldn’t be more impressed with the direction the series has taken, and I cannot urge fans enough to be reading this comic. You’ll definitely get your Mulder and Scully fill for the month but be left wanting more. 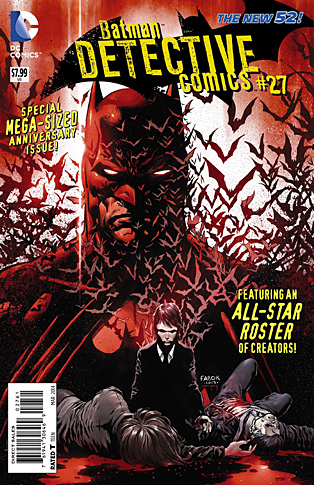 Bannen’s Book of the Week: It’s hard not to love a book that celebrates the timelessness of Batman with a series of vignettes focused on the impact and staying power of the character. Cobbling together a set of tales from Batman’s past, present and future, Detective Comics #27 pays homage to the beginnings of the Dark Knight by honoring everything that makes him one of the world’s most beloved superheroes.

Detective Comics #27 focuses on Batman’s history, transition and legacy. Some of the tales are reminders of Batman’s long history in Gotham and the people he’s impacted. Francesco Francavilla gets the prize for shortest story with “Rain,” a quick three-pager that shows Batman’s first encounter with James Gordon’s son.

Others, like Mike Barr’s “The Sacrifice,” show, in the vein of It’s a Wonderful Life, how Gotham would have fared without Batman. Needless to say, the results are not good. Brad Meltzer offers a retelling of Batman’s first appearance while Gregg Hurwitz writes an introspective look through Batman’s own eyes.

The most creative, though, is Scott Snyder’s “Twenty-Seven” which focuses on the genealogy of the Batman and how the character will live on eternally. Snyder creatively mixes science fiction with personal adoration as he basically lays a blueprint for the future of the character. His point? Batman will always be around, much like Gotham will always need Batman.

The only story that I have an issue with (and which I loved!) is “Gothopia,” written by John Layman. The story is about an alternate Gotham where everyone loves Batman, he feels needed and honored and has a solid supporting cast. The truth, however, is that this is a springboard for the upcoming “Gothopia” storyline appearing in the pages of various Batman books. DC was smart to market the story here, as it’s very intriguing (and beautifully illustrated by Jason Fabok). But this is a book about celebrating Batman’s history, not plugging future projects.

Additionally, the visuals are phenomenal. Packed to the gills with a string of talented artists, Detective Comics #27 is a thing of beauty. The best work is Jason Fabok’s, which could easily stand beside that of Ethan Van Sciver for its sharpness, clarity and detail. If all of “Gothopia” is going to be illustrated by Fabok, count me in.

But really, every page of this comic deserves accolades because not one artist delivered something that was subpar or visually unappealing. Every story is aesthetically gorgeous, and every artist definitely contributed to make the book worth its heavy $7.99 price tag.

For Batman fans, buying Detective Comics #27 is a no-brainer. The book is a mix of everything that makes Batman great. It’s a worthy veneration of a character who has redefined the superhero genre for 75 years and who continues to dazzle new and old fans alike.

A Communique from République