The dream of the 90’s is alive at Marvel apparently, as they go back to the well and continue with the well received and out of continuity X-Men ’92 series. I enjoyed the original that tied in with the very odd Battleworld series. It was funny, and at its core, the idea is solid. There is much nostalgia and fondness for the X-Men universe from the early 90’s. In the brief window between the iconic Chris Claremont run, and the convoluted committee run that drove me and many others to madness, the X-Men had a very special thing going. There was an alchemy of time and place that led to a re-launch of the series that was actually inviting to new readers. Sure, it was silly as hell sometimes with the rampant use of extreme fads and fashions, but for people who were just coming on board, thanks to the popular animated series, and the heavy media coverage the comics were receiving due to insane sales figures, it was still inviting. This first issue provides that invitation once again.

Writers Chad Bowers and Chris Sims keep the mood appropriately light in this first issue. We open on a battle between a combination of X-Men from the “Blue and Gold” squads battling it out with popular 90’s Wolverine villain, Omega Red, and a bunch of other Soviet super-beings. Things quickly shift to the past though, where we see Xavier’s school in full swing. One thing that the extreme 90’s iteration of X-Men tended to neglect was the school element of the various X-Men comics. One-time students the New Mutants at the time were now mercenaries called X-Force, and Generation X were sort of their own thing started by Banshee and White Queen. No more! We get to see the school in action, and a ton of cameos in these early classroom scenes feature members of Generation X and X-Statix like Orphan, Chamber, Synch, Dead Girl, M, Doop and Leech just to name a few. Retroactively fitting X-Statix into this a great idea, as many of those characters never really had a chance to shine before being killed off in that series.

It’s a great choice by Bowers and Sims to establish the school as an entity because it separates this series from the original, and also opens 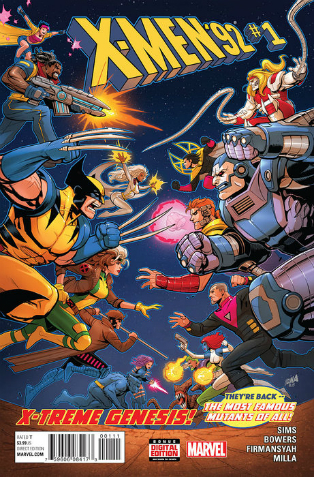 the door for more story opportunities. Grant Morrison realized this in his run on New X-Men in the early 00’s, and it’s odd that the school was not a school for a decade in our timeline. Much like what Marvel tried to do with its gap-filling Lost Years stories featuring Spider-Man and the early X-Men this series can do that too, by shedding some light on what was going on in the school while the teachers were away fighting on Asteroid M or in The Savage Land.

The combo of Alti Firmansyah and Matt Milla on art and colors gives this series a bright animated feel, but also does its own unique thing. I’m looking forward to more Easter Eggs like we get in this issue, and also a fine balance of visuals that blend action and comedy seamlessly. Why is Wolverine’s German buddy Maverick crashing through a window when he could have just knocked on the front door? The answer to this is similar to why roller blades are featured in here: why not? There is also some great facial art in this issue, from Beast’s beleaguered expressions at having to try to teach bratty mutant teens, to Omega Red’s crazy tics from sinister to best pal in one panel, as he’s trying to negotiate the handing over of Maverick. We know the nutjob wants to throw down, and the visuals show that he’s not good at masking his violent intentions.

Speaking of which we are also introduced to a new villain name Alpha Red, a Russian secret weapon that’s been locked away in a bunker for 50 years. Released by the twin children of Nazi and Hydra bigwig Baron Von Strucker, we’re led to believe that plans have not been set in motion as what to do with this psychotic super-being yet. As the issue closes with Chamber and Jubilee out on a date we realize that’s not the case, and that Alpha Red is already lurking in the shadows of Westchester.

Not only was this issue a nostalgic blast from the past, it was also fun and unpredictable. I have full confidence in the ability of this creative team to do something new with this concept. While telling funny stories featuring the X-Men of yore fighting villains in an arcade while wearing roller blades or riding skateboards is great, I also like the idea better of telling stories from this time period where we’ve learned from the mistakes made in the past by a Marvel creative and editorial crew that was in flux. There was good, but there was also a lot of convoluted storytelling due to editorial demands, confusing characters that were lame or with power sets that made no sense, and plot holes the size of Krakoa’s pockmarks. Here’s the chance to streamline it, and to also potentially expose new readers to the X-Men.