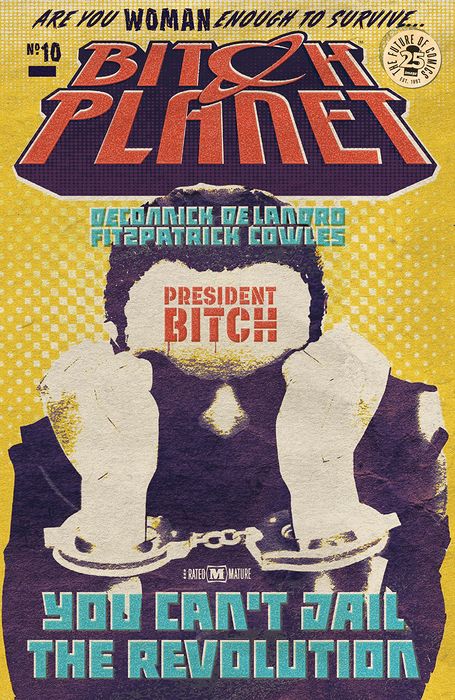 After a long hiatus, Bitch Planet returns to conclude its second arc. The last issue hit the stands back in October 2016, before the US election, and as with the eerie timeliness of Hulu’s current adaptation of The Handmaid’s Tale, one can’t help but feel a dreadful, urgent immersion as the women of BP’s prison navigate the tumultuous chaos of a riot and the women on the outside prepare for a grotesque political rally for the High Father.

There is hope to counter the unease, however, as Kam and her sister work to free Eleanor Doane, the former leader of the free world (the arc’s titular “President Bitch”), first from her solitary prison cell and then from the last guard (literally) trying to keep her down. Simultaneously, a small group of resistance fighters rise up at a hoity-toity event for New Protectorate Day, proclaiming themselves the Children of Eleanor Doane and shouting the rallying cry of “we remember!”

The art and color work are both spectacular throughout the issue, with De Landro’s bold linework and excellent use of shadow giving readers a visceral feeling of strength, power, and the lengths women sometimes go to hide both. Kelly Fitzpatrick’s colors explode with yellow-red heat in one panel, then switch to diseased green in the next. The halftone effect serves to keep the feeling of a 1970s prison exploitation flick that the book is known for, while also smartly highlighting and framing important character moments.

In one particularly affecting sequence, the Children of Eleanor Doane paint their lips in bright red lipstick and draw heavy lines down the center of their chins. In one panel where they’re seen from a distance, the effect makes them look as though their mouths have been bloodied, and suddenly they seem a group of battered women, rising up against their oppression and wearing the marks of the violence inflicted upon them like badges of resilience.

Bitch Planet‘s writing and art are pitch-perfect here, and issue #10 is a thrilling, if belated, end to the President Bitch arc. With the current political climate what it is, it may also be the most important book on the racks. 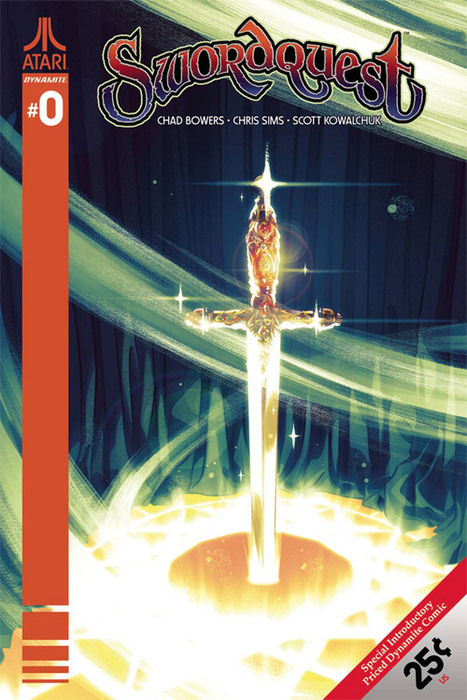 Recently I was at my mother’s house, fiddling around in her basement with my old Super Nintendo in hopes to resuscitate it and play Super Metroid once again. I knew this was fruitless, since a Super Nintendo runs better on an old CRT TV, and even playing it on a rear projection flatscreen TV from the early 00s is difficult. I was doing it more to take my mind off my father and the horrible illness he is suffering from, and how it has struck a terrible blow to my family. Nostalgia in the face of tragedy is strong, especially when it relates to those innocent days sitting in front of a TV and being swept away to another world. This is the vibe SwordQuest #0 is going for, and succeeds in pulling off.

This comic is written by Chad Bowers and Chris Sims, the talented duo behind X-Men ’92, a favorite of mine from the last couple of years. Bowers and Sims do great work in mining nostalgia, while also creating something original and substantial that’s not just navel gazing through rose-colored glasses. Based on a true story that rivals the E.T. landfill, SwordQuest is about a fictional character named Peter, age 45, who receives some terrible medical news. His apartment also burns to the ground. He proceeds to move back in with his mom and drift into the past, especially upon discovering a box with his old Atari and games in it. Bowers and Sims don’t spell anything out, they let actions and images tell a lot of the backstory and explain what kind of man Peter is.

We learn that Peter and his friends Amy and Alvin played a lot of the Atari game SwordQuest back in the day, and had entered into a contest to win an actual $50,000 jewel-encrusted sword and four other prizes that were related to treasures in the game. To win these prizes you had to solve puzzles and decipher clues in the game. What’s crazy is that this was an actual thing Atari did back in the 80s! Like we learn in the comic book they never completed the contest due to Atari hitting financial snags and never releasing all the games in the SwordQuest series. Similar to the mountain of E.T. cartridges rotting out in the desert for decades, legend has it that the SwordQuest sword is still out there somewhere, rumor being that the Franklin Mint just disposed of the unused prizes.

This issue succeeds in bringing together a lot of characters and real backstory into the in-comic world. The art by Ghostwriter X aka Scott Kowalchuk reminds me of David Aja’s work on Hawkeye, both in composition and in clever segues between pages and panels. Often these segues are handled in a fun old-school text adventure video game fashion. We are led to believe the ghosts of Peter’s video game past still haunt him every day, especially now that he’s trying to keep his mind off of recent developments in his life.

I’m really curious how this series unfolds, since it’s doing more with the premise than a meta project needs to. It’s also a nice touch that George Perez handled art duties on the alternate cover for SwordQuest # 1, since he was the artist on the original DC Comics tie-in that came packaged with each of the developed games. For added 80s nostalgia this comic is only 25 cents!

Nothing is more exciting than new discoveries, especially when big signs in the road depressingly remind us of what is ultimately ahead. There are many undiscovered places to check out before then, and sometimes to discover the new you need to look to the past.