If I’m going to address what I liked about Ms. Marvel, I need to first talk about the parts that distracted me from the story. It’s a good comic (I’ll make that very clear), but I didn’t fall in love with it the way I thought I would.

As a lead character, Kamala Khan is every bit as enchanting as you want her to be. You’ll love her by the end of the issue, and this is where G. Willow Wilson shines. Kamala Khan has all the hope, wit and earnestness you want from a heroine and lead of a series. 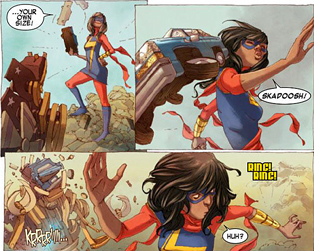 Where I was distracted by the comic was in Wilson’s overt Aryan bigotry. Two of her characters are oozing stereotypes of xenophobic jingoism, but they read as more parodies of these kinds of Americans than actual people. To have Kamala encounter such attitudes is necessary to the development of her character because we sympathize with her immediately – Josh and Zoe are racist jerks.

But they’re stereotypes of racist jerks, and Wilson crams them into the story with all the subtlety of a jackhammer. Everything else about this comic is so organic that the introduction of these characters is forced. They take away from Kamala’s introduction (even though they do show just how naive she is).

Other than this hiccup, the comic opens the shades on the lives of a Muslim family with Turkish roots. And with Kamala as the lead to whom we connect, we feel as innocent as she does. Her earnestness puts us, as readers, at ease with our own ignorance (and I don’t use this term pejoratively).

Furthermore, Adrian Alphona’s dreamy, cartoonish art is perfectly suited for Kamala’s world, particularly when we peek inside her Avengers fan fiction and later when she takes on the role of Ms. Marvel after a mysterious fog wafts in. Everything about the visuals is inviting, appealing and definitely a plus about this debut issue.

My critique aside, Ms. Marvel is a great introduction. You’ll love Kamala Khan and her family, and you’ll wish for her to gain powers just so we can see what kind of heroine she’ll be when provided the opportunity. If Wilson has given any indication, I’m sure we’ll see that Kamala was made to be a heroine and that she has the ability to make it happen. 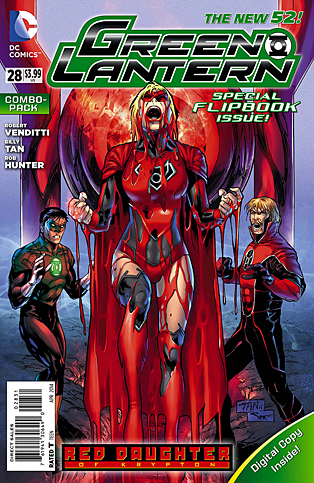 DC tries a novel concept with its Green Lantern/Red Lantern flip book. Parts one and two of “Red Daughter of Krypton” are neatly packaged for a single read to allay the suspense of Kara Zor-El’s indoctrination into the Red Lantern Corps.

Unfortunately, the result is cleverer in concept than in delivery.

Both stories are less about Supergirl as a Red Lantern than they are about individual characters – Hal Jordan and Guy Gardner – dealing with similar issues around running a Lantern Corps. Hal has taken a vow to use the Green Lantern as little as possible (in order to avoid depleting some energy source), and Guy has to deal with issues of love, Hal being on his turf and an unfortunate-looking Fu Manchu.

The only thing that connects the books is the story of Supergirl and her attachment to the Red Ring, but this is dealt with poorly and none of the possible tension or action is delivered. Kara does some cool stuff while wearing the ring, but much of her power is referenced rather than presented.

Furthermore, the books tend to focus on their own running plots, so while Kara is the connective tissue between the two, both writers are really more concerned with their own stories. I found Hal’s more interesting, though. Robert Venditti keeps the story centered on Hal and his struggle to be a leader in a time of such upheaval. Charles Soule, however, delivers a disjointed tale that roughly bounces back and forth between competing plots, neither of which ever gets a solid foothold.

Part of my critique is based on the art. Where Billy Tan draws a clean, polished story, Alessandro Vitti has to draw grit and gore (due to the dark nature of the Red Lantern story), and the characters lose their sharpness under excessive ink lines and oddly composed character designs.

The book also fails to come to a conclusion, so while seeing the two stories together is really a bargain at the $2.99 asking price, the comic fails to maximize on the notion of a flip book. This makes Green Lantern/Red Lantern #28 novel, but not effective. 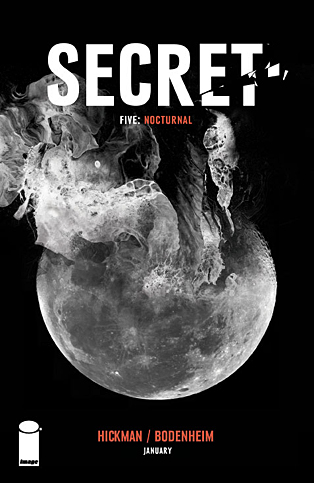 Bannen’s Book of the Week: I love thrillers, and I love espionage, and Secret has both of those concepts in spades.

With Jonathan Hickman’s taut, fluid writing, Secret comes alive as the story makes a sharp bank towards its climax. In this issue, Hickman sets up the final play of the series.

Much of this issue, however, is the setup. Hickman peels back the curtain to give a glimpse of the future. The characters, led by the steely, stone-faced Grant, devise a plan to expose their corrupt boss while at the same time using some of his stolen funds to secure a comfortable future for themselves. The best laid plans, however, often go awry, and Hickman’s many variables are reminders that even Grant’s well-designed scheme cannot compete with the likes of Miles.

The visual composition of the book is stellar. Ryan Bodenheim’s point-of-view shots have a cinematic quality akin to something you’d find in a Wachowski movie. His close-ups are works of art, impeccably detailed and beautifully inked. And the tense, fractured panel construction of the second half of the comic moves the story along at a gallop, making you as the reader feel like you’re being pulled along and all you can do is try your best to keep up.

The story comes to a head in the final pages, and Hickman’s cliffhanger left me begging for more. All of the pieces he’s put into place are now coalescing into one impressive narrative that has a lot more to be addressed, but one which has already established the nerve-wracking world its characters inhabit.

Basically, I see death in the future of these characters. But I also cannot wait to see how the story is resolved. With so much already given, and so much left to do, Jonathan Hickman has established Secret has a must-read series – one that has consistently delivered.

On Flappy Bird, Games Culture and the Problem with ‘Innovation’