When I fired up Skype for my conversation with Marc Flury about his new “rhythm violence” game Thumper, I got a message saying: “Hey Tim! I actually only have about 20 minutes atm… I’m going to see Star Wars shortly lol.” Flury lives in South Korea, and because of the time difference, he was going to see the movie a full 24 hours before me. I was able to put aside my insane jealousy for a few minutes to chat with him about his upcoming game.

Marc Flury and Brian Gibson make up Drool; they are currently developing their first game, Thumper. Before they formed the studio, the two worked at Harmonix on games like Guitar Hero and Rock Band. Gibson is also known for his work as a bassist in the band Lightning Bolt.

Thumper is kind of like F-Zero meets Guitar Hero meets 2001: A Space Odyssey. It looks gorgeous now, but Flury says the original idea was, “a really simple rhythm game with one character, one direction, one kind of ‘lane’ of information…On our YouTube channel we have these really old prototypes of the game and when I first saw it I wasn’t, like, super psyched about it [laughs]. Like, I thought it was really simple and I liked Brian and I knew he was a good artist and musician and I wanted to work with him, but like, I wasn’t that psyched about Thumper.”

But over time, the game won him over, largely because of its visual and sound design that they developed. He had the realization that:

“If you think about certain games, like, at their formal level…in terms of their mechanics only, they don’t sound interesting…A lot of the games I admired the most, especially indie games like Braid or something, were all about these new mechanics and like, I thought that my game was kind of not as cool for a long time.

And this sounds so obvious now but…the experience is not reducible to the formal mechanical things. There’s something about how it all fits together that is the actual experience, and you can’t really predict what that’s going to be, I think.”

Since Flury and Gibson didn’t think the mechanics themselves would hook an audience, which involves a kind of call-and-response with the music’s rhythms, they had to come up with a way to capture what it felt like to play the game to get people interested.

The phrase they eventually coined to describe Thumper was “rhythm violence,” which Flury says they use because, “it was hard to describe the game 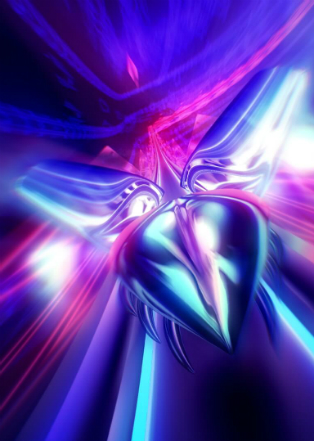 in any way that made it sound cool to people…I like [‘rhythm violence’] because the game is violent, but it’s not violent in the way that most violent games are violent, like there’s not blood or killing things really, so in that way I’m kind of proud of the fact that it’s violent.”

Flury built a custom engine for Thumper from scratch so that they may build both the tracks and the audio simultaneously. This is the special piece of DNA setting Drool’s game apart from other rhythm games, and it’s hard at work before you even get your hands on it. Flury says the goal was to design the audio and visuals “in a tightly integrated way,” so that “maybe the game will come out differently” than if they had just
composed songs and then designed the levels to fit them later.

If you’ve visited Drool’s website, you might notice that all of its visceral violence and throbbing music is offset by a wacky sense of humor. The game’s official description says: “You are a space beetle screaming towards an insane giant head from the future” whose name is “Crackhed.” (It’s pronounced exactly how you think it is. I asked.)

Flury says that humor comes from a desire to not try “too hard to seem edgy,” partly because the game’s name just makes “people think of the Disney rabbit or something,” but also because he has been “conditioned to think games are never that cool. Like, they are really cool but not like, socially cool. You know, something about playing a videogame by yourself [is that] if someone were to, like, watch you do that, it would look kind of creepy [laughs].”

Thumper will be out later this year on Playstation 4 and Steam.