In 2014, writer Jason McNamara (The Martian Confederacy) and artist Greg Hinkle (Airboy) ran a successful Kickstarter for their horror graphic novel, The Rattler. Now it’s 2016 and Image Comics will be releasing McNamara and Hinkle’s gruesome yarn to the mass market. The Rattler is currently available for preorder in Previews and I urge you to order it at your local comic shop or preferred mail order service.

The Rattler is the best kind of nightmare fuel. The book begins with a simple premise – young lovers Stephen and Catherine are on a road trip. They run out of gas on a desolate stretch of road. They wait for a while, hoping to flag down a passerby. Time goes by and eventually, a pickup truck driven by a seemingly Good Samaritan rolls up to help. The driver attaches a chain to Stephen and Catherine’s bumper and suggests Stephen push the car so they don’t rip the bumper off. The truck gets going and then tears off into the darkness, leaving Stephen stranded and Catherine’s fate unknown. 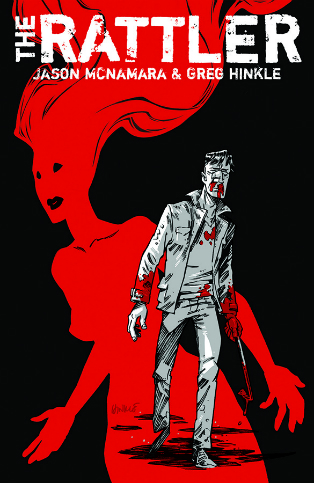 McNamara’s writing and Hinkle’s storytelling weave a heartbreaking tale of love and loss in black, white and red. The story picks up a decade later and it’s grim. Catherine was never found and Stephen’s become a victim’s rights advocate. He has an “arrangement” with his assistant but lives a pretty hollow life. Everything around Stephen revolves around the tragedy that befell Catherine and him ten years ago. It’s not until Stephen hears Catherine’s voice that leads Stephen to a bloody and horrific road trip from Hell.

When I first heard that The Rattler was going to reach a larger audience, I got super excited. I backed the book on Kickstarter and it gave me the creeps the first time I read it. I read it again for this piece and it gave me chills. Stephen’s journey starts as a black and white horror comic unravels into a blood-soaked mystery. The Previews order code is JAN160628 and the Final Order Cut-Off is 2/22/16.

Never has it been more obvious in a comic book that the bad guys aren’t going to win, but that’s not the point of Power Cubed. The point is in the details, and the point is to have fun. Also, there’s some stuff about love, loss and coming of age. Where else can you see a hideously deformed Hitler-worshipping villain yell at a teenager, “Don’t sass me!”? And who among us didn’t side with Dr. Cruel, even if for only a minute, as he slapped Kenny around? I mean, the kid does talk back a bit much 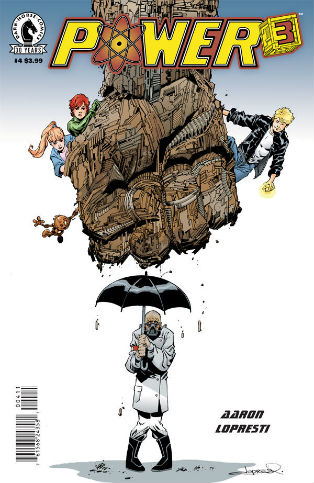 So, here we are at the end of Power Cubed‘s run. But is it the end? Spoiler alert – I see room for a sequel! Trying to summarize the book to someone who hasn’t read it might make me sound like a crazy person: a father tries to reach out to his estranged son with a special birthday present, the titular power cube, and said cube can create anything out of anything; the maniacal Dr. Cruel wants the cube so he can make a girlfriend; U.S. government agents want it because that’s what U.S. government agents do; a teenager learns some real life lessons. As Dr. Cruel would say, “The exposition is over.”

If you haven’t read Power Cubed yet, and if you like fun and adventure, then by all means check it out. The dialogue is funny (and sassy, as I mentioned earlier,) the action is swift and the adventure spans worlds. You’ll also learn that Power Blaster knows how to cook. Second spoiler alert – there are no dinosaurs in issue #4 but there is a gigantic house troll.

Power Cubed is the child of creator/writer/artist Aaron Lopresti. He’s done time at both Marvel and DC, working on several of both companies’ signature books. I’m more familiar with Lopresti as an artist, and this might be the first book of his I’ve read that he’s written. He’s more than capable of holding down things on all fronts, so I hope to read more of his stories in the future.

With Power Cubed now over, The Humans on hiatus, and Batman and the X-Men not exactly thrilling me at the moment, I need to find some new comics kicks. I’m open to suggestions, friends.

“He could still deal death; he still lived. Every twinge of sensation, even of agony, was a negation of death.”

So sums up issue 21 of Conan The Avenger, an issue that comes highly recommend for any fan of Conan The Barbarian, or fans in general of creator Robert E. Howard. Fred Van Lente does an excellent job matching Howard’s words with the fantastic art of Jose Luis. It helps that I recently read the source material, Howard’s Conan story, A Witch Shall Be Born, so I clearly remember Howard’s prose reading this issue, a quintessential and iconic standalone Conan tale where he is crucified. You may remember the scene from Conan The Barbarian where Arnold’s Conan is crucified and takes down a vulture with his teeth. Well, that came from this story! 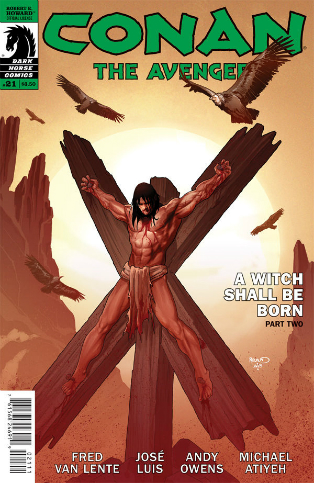 In the first part last issue we were given a lot of exposition and introduction to characters, but to be honest it’s rather convoluted and isn’t necessary to enjoy this issue. Briefly, the twin sisters Taramis and Salome are the queen of Khauraun, and an exile turned dark sorcerer, respectively. Salome
brings her Shemitish mercenary forces to Khauraun to act as the standing army, dismissing the proper army put in place by Taramis’s government.

Rebellious members of the army are killed, and the captain is taken prisoner after he slays many Shemites. He is a Cimmerian from the North named Conan, and he is sentenced by the evil witch to crucifixion. That’s where we pick up with this issue, although to be honest that rather convoluted backstory isn’t necessary to enjoy this issue. That issue is about a bunch of non-central characters, and this issue is pure Conan.

The art in the first part of this adaptation didn’t blow me away; Brian Ching’s art is too muddy with odd line work. At times the evil Salome has lips similar to the X-Men villain Apocalypse, which kind of makes sense, except she’s supposed to be able to pass for her fair twin sister. With such a straightforward narrative I wasn’t sure if issue 21 artist Jose Luis could pull it off, but I was completely wrong. Luis’s art is classic narrative fantasy art, very crisp and detailed. It reminded me of a brutal take on the art of Prince Valiant mixed with a touch of Barry Windsor-Smith and John Buscema. You start to feel Conan’s agony and thirst as he realizes he may very well die on this crucifix, as the vultures circle closer.

Robert E. Howard was always very effective at being direct while coloring his words with a perfect purple pulpiness. Fred Van Lente masterfully uses passages directly from the source material to add to Jose Luis’s powerful imagery. Even though I’ve seen this scenario play out on both the page and movie screen, I still found myself thinking Conan may not make it.

It says something about how influential this passage is to not only the Conan mythos but to fantasy art in general. Over the years many artists have done their visual take on the crucified Cimmerian, and Mark Silvestri even paid tribute to it on the cover of Uncanny X-Men #251, one of the first X-Men comics I bought, purely due to the power of that cover image of Wolverine crucified on a giant ‘X’. 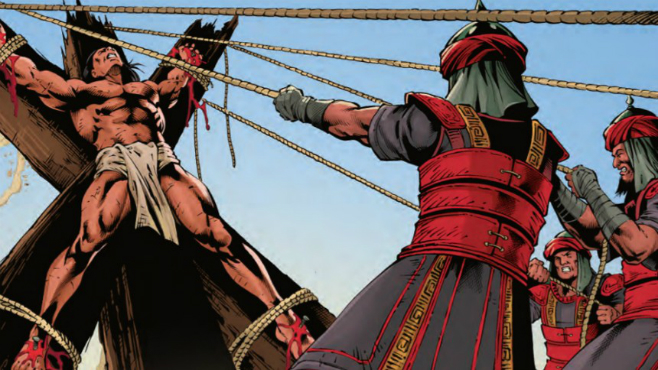 With rather low expectations I must admit to being pleasantly surprised by this very effective standalone issue. A Witch Is Born is a somewhat uneven story, as it really doesn’t begin until Conan is nailed on those planks of wood. From here we get a lot of insight into Conan the character that essentially he is a man unwilling to die, that his motivations for living are to experience everything that he possibly can. He is also vulnerable, which Robert E. Howard rarely allowed for many of his hard as nails pulp characters. Although he is built up to be a fearless killing machine, he is still a human that requires food and water, and who also doesn’t wish to die alone in such a pathetic manner. This story has played out again and again in various fantastic media unrelated to Conan since the original story was published in the pulp magazine Weird Tales in 1934. This is the original, and I highly recommend all fans of fantasy to check it out.

The Hateful Eight: A Microcosm of America