I didn’t know what to expect when I sat down to watch Quentin Tarantino’s The Hateful Eight, but I will tell you one thing I wasn’t expecting: a bottle episode, a locked-room murder mystery set in Minnie’s Haberdashery in the middle of a Wyoming blizzard during the Reconstruction era.

With all the hype surrounding the film’s 70mm release and following the rollicking adventure across the American South that was Django Unchained, I expected to see a lot more of the majestic beauty of the Great Outdoors.  Instead, the movie is feels uncomfortably close and even stifling.  The characters might only be trapped together by the harsh weather for a few days but the three-hour running time of the film made it feel like weeks.

And I loved it.

During the Golden Age of Hollywood Westerns, the wide open prairies and vast deserts of the frontier symbolized the potential for a new beginning.  But the bounty hunters and Civil War veterans and outlaws arrive in Wyoming with too much baggage to have a real fresh start.  Instead, they wind up re-enacting (heh) old battles. 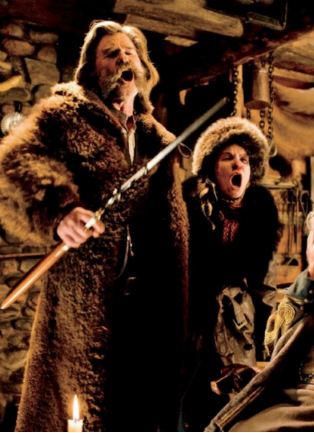 They even go so far as to divide the room into Northern and Southern regions, with the fireplace symbolizing Georgia (and the burning of Atlanta) and the bar representing Philadelphia (which was threatened by Southern troops during the Gettysburg campaign).  Some still wear their old uniforms.  Other carry around relics from their service.  But all carry their hate and mistrust for those who fought on the other side.  In other words, Minnie’s a miniature of America, grappling with the difficulties of stitching itself back together after being torn asunder.

Of course, the Yankee/Rebel divide is tightly bound up with the question of race, and the movie abounds with imagery, like a white and black horse yoked together, a piano’s black and white keys struggling to play a Christmas carol in tune, a chessboard serving as a place where former battlefield adversaries can face off once more, and a series of white hands in black gloves and vice versa.  The Civil War might be over, and Wyoming might not have been a battleground, but the bounty hunters still traffic in human beings and unknown travelers still require a writ of passage (in this case, a warrant proving that the prisoner traveling in their wake is deserving of manacles).

The movie is made up of a string of monologues about identity and history that are inevitably used to rationalize violence, whether for justice, revenge or, perhaps, both.  In fact, at one point, Tim Roth’s professional hangman defines real justice (as opposed to frontier justice) as justice dispensed by a dispassionate outside observer.  But there is no such thing as a dispassionate observer in the room when all the past alliances and loyalties and betrayals are taken into account.

There can be no happy endings here, and no justice, but there might be a bit of respect birthed in blood.  And we in the audience are forced to ask ourselves: is America worth fighting for?  Is it, like a certain letter carried by Samuel L. Jackson’s Northern Calvary Officer (and the brightly-polished, Technicolor Westerns of the 40s and 50s) just a forgery?  Or is it another one of Walton Goggin’s Lost Causes?