When it was originally released, Batman Returns was considered a kind of failure. Sure, it grossed over $266 million worldwide, but it wasn’t as massive as the original film’s impressive 1989 take of $411.3 million against a $48 million budget. Toys depicting a grotesque and monstrous Penguin as portrayed by Danny Devito were released, as were Catwoman toys of a sexy and seductive Michelle Pfeiffer in a skintight S&M outfit. Christopher Walken was thrown in as villainous Max Shreck, because why not? This wasn’t a movie for kids necessarily, and possibly not a movie for the majority of filmgoers.

We were still a few years away from Tim Burton’s vision being bottled into a more palatable form that kids could enjoy, although while it may bear his visual style, many forget that The Nightmare Before Christmas wasn’t directed by him. When left to his own devices, Burton’s directorial vision can bring forth weird genius material, weird catastrophes, or just weird bland (like his recent work). Batman Returns falls into the middle category where chaos ensues and the villains take over, quite literally during the course of the film. 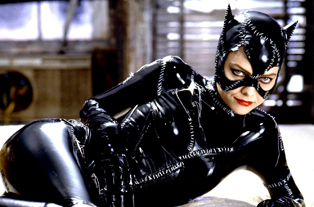 In 1992 Burton’s brand hadn’t been set in stone. The audience knew what he was capable of, but Warner Bros. executives just thought he was the guy who made a ton of money with Batman. It’s like in the early 80’s when David Lynch, fresh off of his early career success with The Elephant Man, was offered all sorts of random follow up films including Return of the Jedi. He eventually took on Dune, and shockingly didn’t deliver a Star Wars-level success from source material about a Jihad on a desert planet where giant worms are harvested for their peyote-like physical properties.

What happened with Batman Returns was even more interesting, as Burton had made a financial success and was given the keys to the Batmobile, despite any misgivings he publicly aired about his experience working on the first film. Burton wanted to tell a story about outsiders, a favorite topic of his, and he wanted to tell a weird Christmas movie. Mind you, this was a movie released in June of 1992 and was meant to be a summer blockbuster, yet it took place in a cold and unforgivingly weird Gotham at Christmastime.

Batman Returns is ultimately about a bunch of outsiders at Christmas trying to get through all the bullshit of the holiday season. Selina Kyle is a beleaguered secretary working for the character we’re not supposed to feel any sympathy for, prominent businessman Max Shreck. Shreck pushes Kyle out of a window, is revived by cats and has a sexual awakening as kickboxing cat burglar. 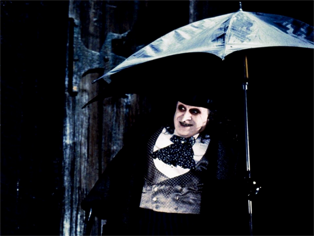 Orphan Oswald Cobblepot is raised by a penguins living in an abandoned zoo exhibit (don’t ask) and then a Circus troupe. He returns to Gotham to claim his birthright after transforming his adoptive family into a crime syndicate called the Red Triangle Circus Gang. After much mayhem, Cobblepot runs for mayor, in a plot that echoes the 60’s Batman TV series. Eventually he discovers that his true calling is back in the sewers with the penguins and fully reverts back into the monstrous Penguin.

As Jack Nicholson’s Joker once proclaimed “Where, is the Batman?”

Pretty much at home, washing his tights. Michael Keaton returns with his neurotic manic depressive Bruce Wayne, but really doesn’t have much to do in this sequel. Bruce Wayne is a lonely man, with just Alfred as his friend and family during the holiday season.

There are a couple of great moments for Keaton’s Bruce Wayne which tie into the Christmas theme. For all of the ups and downs of the original four Batman movies, one moment is always enjoyable: the dance scene in Batman Returns when Bruce and Selina, the only unmasked people at a holiday costume ball, run into each other and dance to Siouxsie and the Banshees. While it’s so Tim Burton in its gothness, it’s also such a nice holiday scene.

Wayne is ultimately as lonely at the end of the movie as he was at the start. Many characters die in this movie, two villains definitely and Catwoman seemingly. Uncharacteristic for the comics and Adam West’s Batman, Keaton’s version was the cause of some of that death (once directly in the case of that poor Red Triangle Circus Gang member who he blows up with a stick of dynamite). 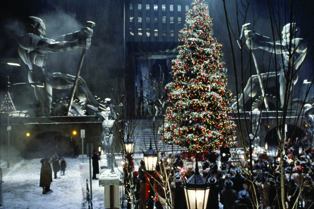 As Alfred is driving him on that cold winter night Wayne looks out the window at the city and thinks he spots Catwoman ducking down an alley. It turns out to be a black cat in an alley trying to keep warm, and he picks it up and takes it back into the car. The last line spoken from a lonely Bruce to Alfred is “Merry Christmas Alfred. Good will toward men… and women.”

Obviously not, but it does make for a wonderful Tim Burton movie about the malaise and depression many of us face around the holiday season. Oswald Cobblepot and Bruce Wayne, both were orphaned in different ways, want a traditional holiday spent with family. Selina Kyle also seems to be stranded in her apartment full of faux-happiness that she ultimately destroys. Only the evil businessman Shreck has anything resembling a “normal” family.

This again is the holiday movie of an outsider that really doesn’t have a happy ending, and is reflective of the artistic vision of early Tim Burton. The Nightmare Before Christmas has elements of this, but has a happy ending and is more of a crowd pleaser. 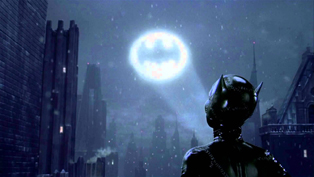 A coda featuring Catwoman staring up at the Bat Signal was added in post-production just to keep the sequel hopes up, but this was the blockbuster that got away and instead was an art film with a big budget. It’s a movie that takes many things that we’re familiar with, iconic characters and images, and warps them. It’s the movie that showed us Tim Burton’s artistic vision.

And, at the end of the day, Batman Returns says that no matter how depressed you are, no matter how terrible things seem, you’re never truly alone. For some during the holiday season, that’s the best message of all.