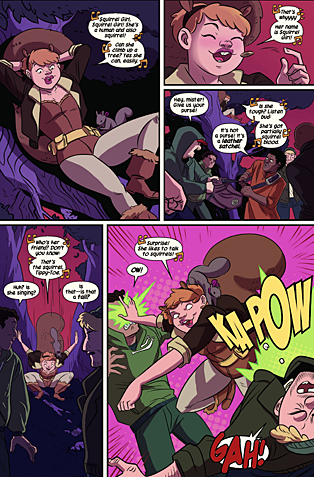 Squirrel Girl isn’t a new character, but the new book is accessible to both new and old readers, not least due to the open, confident voice of Squirrel Girl herself. Ryan North’s punchy, upbeat writing – particularly the Squirrel Girl theme song to the tune of the Spider-Man theme – echoes the cheerful confidence of Silver Age comics. Erica Henderson’s art does the same, with its thin lines and solid hues. But Squirrel Girl isn’t a Silver Age femme fatale – she’s a friendly, buck-toothed, big-hipped young woman. She’s beautiful.

Squirrel Girl isn’t fighting her past or her guilt or because she’s forced to. As she sings in her theme song, she likes fighting crime. A practically novel thing in a superhero these days, but Squirrel Girl is now part of an emerging new generation of upbeat, witty superheroes who were imagined (or reimagined) as a reaction to the masochism and long-suffering of the 2000s: like the new Kamala Khan Ms. Marvel, the old Stephanie Brown Batgirl and the new Barbara Gordon Batgirl, Squirrel Girl is a well-adjusted, if slightly awkward, young person who actually finds her life’s work fulfilling.

But Doreen has an advantage over these younger superheroes: she’s the Unbeatable Squirrel Girl. She has complete mastery over all things squirrel. Fighting bad guys is not a tough nut to crack. So what challenges her isn’t being Squirrel Girl: it’s being Doreen Green. In that vein, Squirrel Girl #1 picks up where, having mastered squirrels, Doreen is moving on to her next challenge: a college degree in computer science. “I’m not Achieving Consistency Across Distributed Database Systems Girl,” she explains to her squirrel companion Tippy-Toe. “Well. Not yet.”

Squirrel Girl doesn’t face down murderous clowns, killer robots or burdens of glorious purpose. She faces down prickly roommates and whether or not it’s okay to lie about having super strength so a cute boy will help you move your boxes. At a time where the majority of superheroes are, for better or worse, angst-ridden and long-suffering, The Unbeatable Squirrel Girl is the first comic I’ve read in a while that made me laugh out loud. I’ll definitely be picking this one up again. 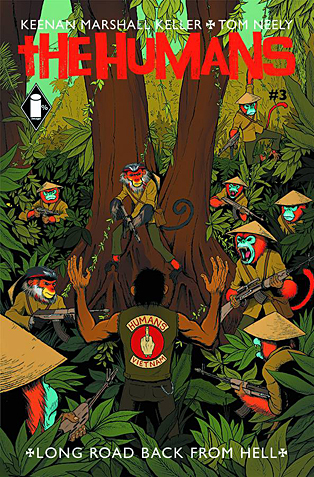 Have you ever wondered what a simian version of the Vietnam War would look like? Well, you get it in Humans #3.

As if the first two issues weren’t twisted enough, this month’s chapter takes us more into the PTSD-ravaged mind of lead character/ape, Johnny. Things open the morning after the huge party that closed last issue. We see what could be an average day in the life of Johnny, which is basically him trying to navigate the fine line between reality and his war-induced scars. Johnny has intrusive thoughts, vivid hallucinations and access to a loaded gun. This will probably not end well.

When Johnny is finally able to string together a few lucid moments, he meets with his fellow Humans to plan the club’s next ride, a drug deal to unleash a new strain of “berserker” drug. This will probably not end well.

Humans #3 is heavier than the previous two issues, and the plot revs up to move the action out of Bakersfield. Characterization and tone are strong thanks to the tight-knit writer/artist/colorist creative trio. With each chapter, readers realize that our heroes are not the good guys, even though the story is about them (much in the mold of the old outlaw movies that inspire Humans, or more current TV shows with ‘tweener characters, ranging from The Sopranos to Breaking Bad). We’re also treated to another club newsletter, pinup profile and two more songs to download for our growing Humans soundtrack.

Things will probably only get worse from here – heavier action, carnage and an unhinged Vietnam vet with a propensity for booze and drugs – so proceed with caution, my fellow readers.