In an age of infinite knowledge available at your fingertips, you might think mystery has died. If you hear a crazy story, the truth (or lie) of it is quickly discovered via a simple Google search. When you see the words ‘Inspired by a True Story’ in a movie or television series trailer, you can find just how much inspiration went into the end product within minutes. Need details on ancient Egyptian religion? The origin of Friday the 13th’s spooky undertones? Just want to know where the nearest Thai food place is? No worries, friend, the internet has your back.

It’s this lack of mystery in the world that drove Nic Silver, a producer for Pacific Northwest Stories, to create the Tanis podcast. Tanis is a serialized, narrative fiction podcast about Nic’s search for the lost secret of Tanis. It’s a name that rings somewhat familiar, the first time you hear it, and a quick Google search shows that there isn’t much secret to Tanis – it’s an ancient Egyptian city on a long dry branch of the river Nile. The reason it may sound familiar? It appears in the 1981 film Raiders of the Lost Ark as the supposed resting place of the Ark of the Covenant.

In Nic’s world, though, Tanis means more than that. Tanis is not just an ancient city associated with ancient holy relics, but a concept. A place, a moving location in time and space, and the key to a half dozen different mysteries he encounters along the way.

On just its sixth episode, Tanis already provides hours of entertainment as compelling as any of the best TV or film to come out in the last decade. It has depth, memorable characters, and promises to return to the days of radio dramas – you know, the sort of thing that sent the US into a panic when a broadcast didn’t make it perfectly clear that the story of aliens invading the earth was entirely fictional.

Despite being the distinct product of not just the internet age, but also of the more recent uptick in highly produced podcasts (spurred on by the runaway success 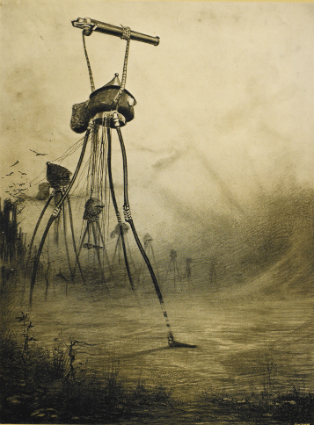 of Serial in October 2014), Tanis feels like a throwback to the heady days of Orson Welles’ take on “War of the Worlds”, of fireside chats and old-time radio. It weaves together topics as diverse as ‘number stations’, Nicolas Flamel, and /r/A858DE45F56D9BC9 in a way that is simultaneously tenuous and convincing. Tanis brings out the inner conspiracy theorist in all those who succumb to its promise of mystery.

This, of course, is not Nic Silver’s first venture into the world of fictional, serialized podcasting – he’s the producer on The Black Tapes, another successful member of the growing Pacific Northwest Stories banner,
and recent Kickstarter success story. While The Black Tapes is by no means a bad show, Tanis is better; it shows up The Black Tapes in the pacing of its narrative, the quality of its voice acting, and the originality of its story. In other words, if you’re looking for something to listen to, if you’re looking for a sense of mystery in an age where it has all but died, you need look no further than the search for Tanis.

Tritton AX 720s Are Too Good for Bad Games

Rise of the Existential Crisis: How One Woman Nearly Never Finished a Book Review
Previous Post