In Inglourious Basterds, the scene opens on a ritz-y wartime Paris theater. On the arm of a lovely blonde, Brad Pitt and his rather silly mustache wait. Prior to this moment, he’s said (in his thick Southern drawl) that he knows a bit of Italian, enough for his group to pass as Italian filmmakers deep in the heart of occupied France.

And then his mouth opens and it’s all over.

This is the experience of watching Bruce Willis in Misery. The Broadway production, a recent adaptation of the Stephen King novel, stars Willis, and Laurie Metcalf (best known for her role as Roseanne’s sister).Willis plays Paul Sheldon, a writer of 19th century romance novels who is stranded at the home of his number one fan.

We managed to snag seats four rows back on the left side, close enough for the real reason that people are lining up to see Misery– to be 20 feet from Bruce Willis. The production reeks vaguely of Birdman – an out of season action star attempting to establish himself in a more serious light by taking to the stage. Stage actors are regularly culturally venerated – a true actor is one who stays on stage for the whole hour, alone, with the audience and the words of the playwright.

This casting puts Willis against type. Paul Sheldon is angry and 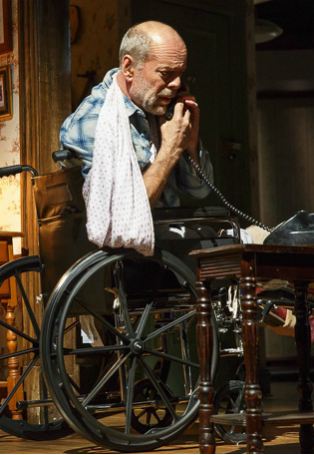 frustrated, but he’s also highly literate and well spoken. True to his action movie roots, Bruce Willis is at his best when he’s in agony.

Early on, when struck, the audience recoils in part because of the action itself, but also due to Willis’s characterization. His moans and groans are the high point of his acting. Play-acting affection or cunning is stilted by the imprecise delivery of his lines. It was honestly questionable whether or not Willis actually knew all of his lines. Annie might not have caught what Paul was doing, but the audience was equally, and unattractively, in the dark.

Laurie Metcalf is an amusing Annie, but as someone unfamiliar with the source material, it made me question whether or not this production was intended to be a comedy. While some of the laughs were from discomfort or horror – the kind of out of control giggles that some get when confronted with something deeply unsettling – others were wholly out of place in what is ostensibly a horror show. The audience’s familiarity with her as a comedy actress might have contributed to some of this unintentional misdirection.

It is unfortunate that Metcalf was sidled with Willis. While she ultimately shines – her continued derangement molding the role into a well thought out performance – it is difficult to discuss her outside of Willis’s sphere. For all intents and purposes, Misery is a two-person show, and Metcalf is carrying all of the weight, pinioned by his delivery and wooden performance.

If you find your way to New York, do yourself a favor and wait for Willis’s understudy to take the part of Paul Sheldon. Misery will be a much better production when John McClane moves on.