I owe you a bit of an apology, Dear Reader. I didn’t get to read any comics this week thanks to a bout with bronchitis that got me coughing my brain out. I can tell you I bought some great comics – Paybacks # 3, Batman Europa # 1, some Star Wars comics and the like. I’m looking forward to reading them this week. We do have a treat this week, though. Sal Lucci is here with a review of a comic by one of my favorite writers, this week’s The Tomorrows # 5. That’s another book in my “to read” stack. But enough about my stupid woes, onto some comics!

This month’s issue is titled “A Beginner’s Guide to Destroying the Multiverse” and it gives me new a new perspective on The Tomorrows. I started 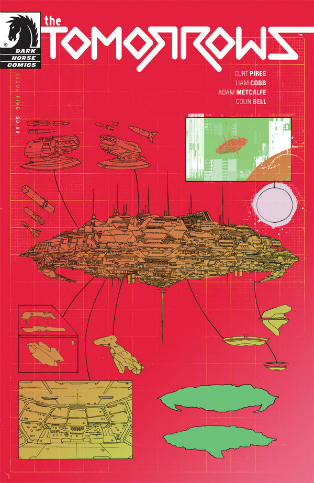 thinking this with issue #4, but maybe I’ve been reading this book the wrong way. Are our protagonists actually the bad guys? Claudius is full of doubts this issue, reckoning that the Tomorrows gang will face some sort of judgment when they have finished their “harvesting” task.

This issue is short on words, but the visuals are strong and carry the story. I can feel the trees rustling as Claudius catches and cuts down his prey. I can hear the footsteps as Jiro chases an escapee down the hall. I can smell the death on the stormy red planet, even though it’s supposed to be Claudius’ dream.

Then there’s the graphic sex. I was not expecting that.

The Tomorrows have mistakenly perceived the Multiverse as consistent. In the 919 corner, things don’t go as planned for our adventurers. Jiro taunts his escapee, saying “In every universe, this plays out the same.” Said escapee laughs in Jiro’s face, telling him that where they are now, he is indeed escaping. And then he’s gone!

In the 919 universe, Aldous is particularly Jesus/God/deity-looking. He tries to assure Claudius that what the Tomorrows are doing is right, and that he does indeed feel the weight of their so-called deal 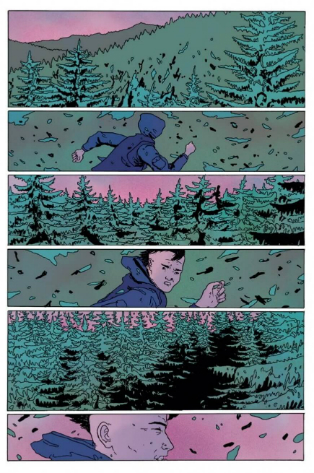 with the devil. Their philosophical tete-a-tete is cut off, and Aldous is saved by the bell, so to speak. Claudius saves Aldous from having to apologize by apologizing himself for doubting Aldous. Does Aldous really feel sorry? It’s hard to tell, and my inner realist-slash-skeptic says no.

The Tomorrows seems to be heading for a strong close, with the strength of issue #4 carrying into #5. Issue #5 ends with a nice cliffhanger, as the gang meets up with it’s connection, but they know their
Multiverse selves are waiting angrily.

Once The Tomorrows is over, I’ll have to give the mini-series a re-read. Maybe after seeing how it all unfolds, I’ll feel differently about the issues I thought were weak (#1 and #3.) The good issues are strong enough to make me second guess myself, so here’s to hoping Curt Pires has something big up his sleeves for the finale!