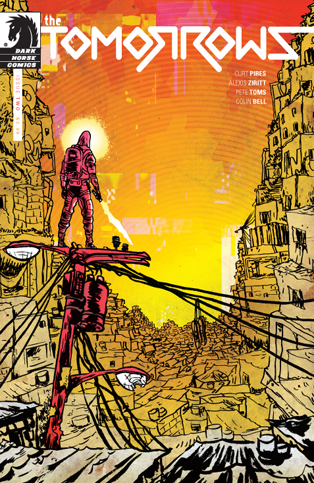 Sometimes I need to shake things up completely to get out of a comics slump. Superheros and exploitation books will always be my go to, but I feel like I’ve been treading water lately. So I jumped into a title wholly unknown to me, and the second issue at that. That’ll get the cylinders in the old thinker firing!

The mysterious manifesto that starts The Tomorrows #2 (by a certain “Aldous Ellis,” possibly an homage to Aldous Huxley?) tells of a future-now where humankind is afraid of the obvious, that there might be a link between science, magic and art. Ellis tells the reader, a reader who might be unafraid when seeing this link, that to find true reality, one has to look at the hazy intersection of science-magic-art. Ellis tells readers to think of how their cell phone technology would have been considered witchcraft if shown to our ancestors. He cites meta-artists (David Lynch, Charlie Kaufman) and includes comic writers who dwell in the “multiverse.” Since I haven’t read issue #1 yet, this is my intro to The Tomorrows,so I’m expecting some heady, esoteric hoodoo throughout.

Issue #2 takes use to Rio de Janeiro, a city experiencing a “postgovernmental vacuum.” A gang, presumably the Tomorrows of the title, have lost a member to mysterious assassin. They need to find their friend’s killer post-haste, but there are many questions: Why was Jacosta killed? Might another Tomorrow be next? How could this assassin be so sloppy and leave behind such a bold clue? These unknowns draw the reader in, and since The Tomorrows is a miniseries, the answers are going to have to come quickly (as one of the Tomorrows says, “the future is happening, and it’s happening fast.”) Or will these answers come at all, considering the blurred lines Ellis references in his “Tomorrow Manifesto?”

Both writer Curt Pires and artist Alexis Ziritt are new, welcome additions to my world. I like everything I’m seeing in The Tomorrows, so I’ll stroll through their respective catalogs. Pires will write the entirety of The Tomorrows, but a different artist will be featured each issue. Ziritt uses interesting panel construction that keeps things fresh. The opening reveal of Jacosta’s murder scene plays out particularly nicely.

I’ll be back in four weeks for issue #3, and in the meantime I’ll search out issue #1. I’m curious to see if and how each issue might change my perspective of what I’ve read and what’s to come. 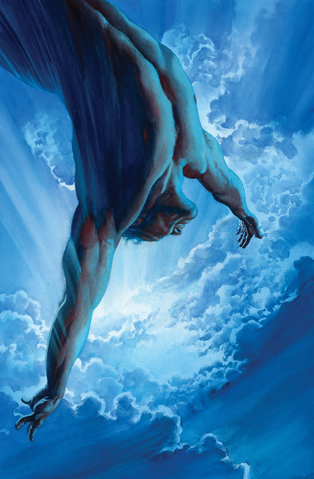 I remember August of 1995 well. Unbeknownst to me it would begin a year that would alter my social life forever, and I would meet a group of people that I still remain friends with to this day. It was also the crossroads of my interest in comic books, where I abandoned Marvel and DC for the independent comics. The reason why was that the X-Men and Spider-Man titles, favorites of mine for a long time, were both going off the rails with massive crossovers and convoluted plots. The Big Two were both in a competition to see who could out-gimmick the other, with holographic covers, foil-embossed covers and bonus trading cards becoming the norm. Image Comics, the company that partially encouraged Marvel and DC to act the way they did with all this gimmick nonsense, took on this bold new series entitled Astro City. No gimmicks, just beautiful art and storytelling, a herald of the mature creator-owned excellence Image operates in now. Decades later a bold cover painted by Alex Ross with “20 years” emblazoned along the bottom introduces us to this wonderful landmark issue, a labor of love from the mind of comic vets Kurt Busiek, Alex Ross and artist Brent Anderson.

It starts with a dream. Main character and Superman analogue The Samaritan is flying through the air naked. While he cherishes this ability something is not right. He finds his lover Winged Victory, and her presence gives him peace. Soon they are violently separated and he awakes in a panic. He has no idea what is causing these nightmares, but they are happening more often and affecting his life in numerous ways. This is a callback to the very first issue of Astro City, yet deals with a classic theme of the series: superhumans with very human problems. So begins a relatively simple standalone issue that not only pays homage to the series itself, but also to superhero comics in general. Brent Anderson’s art has this wonderful lived-in quality to it, as if you’re reading an old classic comic from an indeterminate period. Colorist Alex Sinclair adds to this feeling, but also incorporates wonderful effects like the blue coloring of energy in the eyes of The Samaritan when he is “charging up” and about to enter into a fight.

What Busiek brings to the table is the humanity that he brought to some of his classic series like Marvels. These are beings with superpowers, neurosis, depression, noble and sinister intentions, love and longing. Initially it was a lived-in universe that we were just diving into at a random period and not from the start. 20 years later has added layers to that lived-in universe, and we now can say we had ringside seats for some of the major events that have occurred in this universe.

The only complaint that I have is that the resolution comes so abruptly and is very one and done. That’s to be expected from a standalone comic that dips one toe into the modern style of storytelling and one in the absurdity of the Golden and Silver Age of comics. I expect there to be a callback to this down the line, but for now it seems way too convenient and tidy that the root of the mental health problems of The Samaritan can be fixed so quickly.

Astro City has always been a love letter to comic books and superheroes, somehow linking the Golden Age through the Modern Age effortlessly. The fact that this is a standalone issue hearkens back to an age when comic books weren’t created just for the graphic novel or to storyboard a Hollywood blockbuster. As progressive and different as this series has always been there’s something quaint about it now, in a good way. It also helps that it’s being released by Vertigo, a company that also helped improve the comics landscape decades ago. Thanks to series like this comic books from the bigger companies began to mature in the late 90s. It would take Marvel and DC a while, but even they realized the value of well-written and drawn comic books that had faith in what the creators came up with, and didn’t necessarily have to be dark and ‘roided out.

This is a great issue for those who were affected by Astro City at some point, either as a reward for continued patronage or as a check-in for those of us who went away. Once you know what’s up you can always pay a visit though. For newcomers I’d say pick up the first trade and work your way through the best arcs from there. If you’re ever feeling overwhelmed by gimmicks and crossovers Astro City is always there to escape to, and hopefully will be for a good while longer. 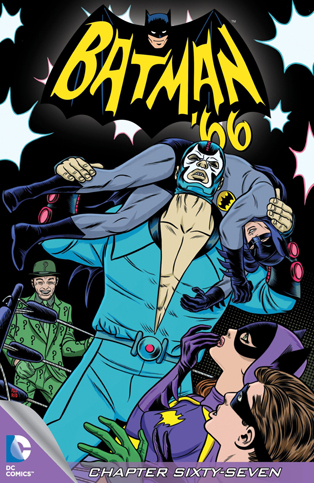 In the series’s most recent issues, Jeff Parker and company have been introducing villains that weren’t previously part of the Batman ‘66 universe into the series. We now have roller derby Harley Quinn, southern belle Poison Ivy and the last two issues introduced Bane as a mysterious luchador.

The issue kicks off with Batman, Robin and Batgirl heading South of the Border to pursue the vile lucha libre wrestling champion, Bane, and his new partner in crime, the Riddler! Last issue, Bane had Batman in an all-too familiar backbreaker move. Thanks to some classic Adam West-style exposition, the reader learns just how Batman got out of a deathtrap two other Batmen couldn’t escape! I won’t give it away here, but it’s a really clever callback to something Batman did in every episode of the 1966 Batman TV series. .

While Batman ‘66 # 66 focused on Bane’s wrestling prowess, this issue takes readers south, where Bane seeks to control his hometown by boiling a crystal skull into his a venom that gives him super strength.

Yeah, you read that right.

Parker and Kowalchuk capture the campy tone of the TV series while adding to its mythos. It’s a Batman series that isn’t afraid to be silly, but it’s just as iconic as Scott Snyder & Greg Capullo’s Batman and it’s just as exciting as those early Mike Parobeck Batman Adventures comics.