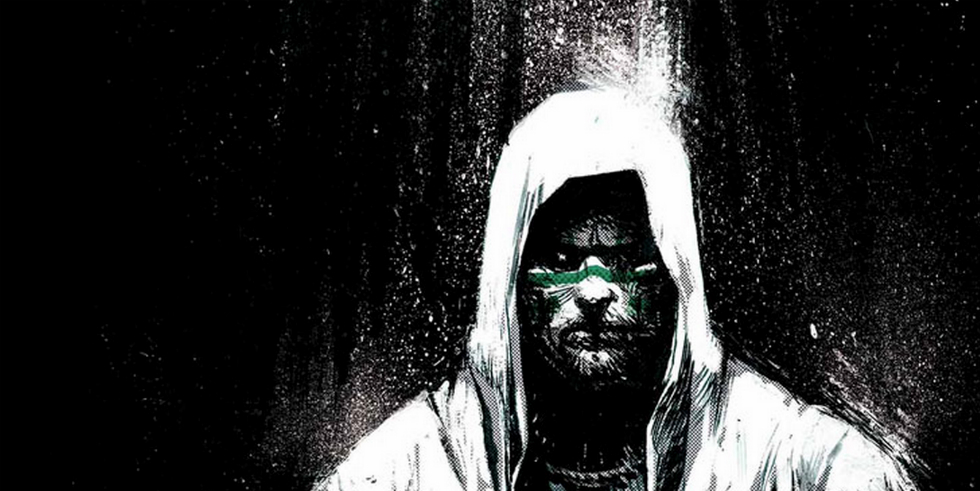 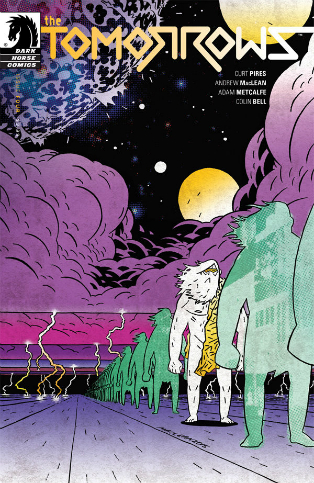 The Tomorrows seems to have an erratic release schedule, with issue #4 coming out less than a month after issue #3, and that issue was released over a month after #2. Issue #2 itself was about six weeks apart from #1. My experience reading The Tomorrows has been just as staggered. I started with issue #2, made my way back to #1, then issues #3 and #4 in proper order.

I really enjoyed issue #2, but didn’t much care for issues #1 and #3. I came pretty close to skipping this here issue, but made a last-minute decision to follow the mini-series through. The Tomorrows, as a series, has a lot on its mind, so to speak, and sometimes writer Curt Pires’ ideas don’t fully translate on the page. His ideas come forth most clear in the miscellany of the issues: Aldous Ellis’ manifesto in issue #2, the magazine interview with Ellis in issue #4. Issues #1 and #3 are a little too loose, where the ideas and images in issues #2 and #4 are more tangible, for lack of a better word.

Even though I use the word “tangible” to describe issue #4, the story takes place for the most part in a dream inside the mind of the fatally wounded
Aldous Ellis. We see the origins of his move from traditional thinking and acceptance of the world. We follow his quest for truth hidden between the lines of the homogeneous, conformist and safe everyday world. We see the origins of the Tomorrows, originally just a pack of street punks. And finally, back in the real world, we see Ellis die, despite his very active mind’s best efforts to persevere. Does Claudius have the inner strength to carry on Ellis’ dying wish, let alone his message?

Each issue of The Tomorrows features a different artist, and Andrew MacLean’s cartoon style drawings stand out against the seriousness of this issue. I don’t know who the target audience is for The Tomorrows, but I feel that teens and young adults, those still forming their world view, those who find they see the world in ways different than their more “normal” peers do would find this right up their alley. I feel MacLean’s cartoon-style art puts across to a younger audience that they are reading something more adult than maybe they initially thought.

The Tomorrows is a philosophical book, at times smart, at times reaching and not quite able to capture with words what it really wants to say. The future is coming fast, as one of the Tomorrows gang said in issue #2, but are the Tomorrows right in trying to stop it? I’m not so sure. Maybe they should let the world consume itself. 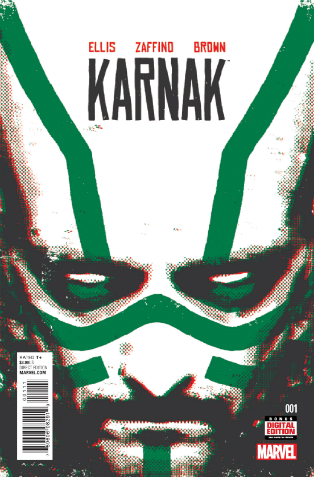 A note to Marvel Comics: do whatever it takes to keep Warren Ellis on board as a writer! Even on the small runs that he does on comic books like Moon Knight and now Karnak the guy does incredible work. Pair him up with the right artist and it’s the perfect vehicle for Ellis’s forays into mainstream comics. Like our main character at the beginning of this story, it seems like he is contacted in his isolated stone tower by a Marvel representative and only hesitantly goes along with their plan to make ends meet for himself.

Karnak the Inhuman has never had his own solo series since his introduction in the pages of Fantastic Four back in 1965. I admit that I’ve never been too familiar with him, other than when he appears alongside the rest of the Inhuman royal family whenever there was a “Watcher Level” crisis in the Marvel Universe or they just casually teleport in to an issue of Daredevil or something. I knew that his power is the ability to see the flaws in everything, and that’s basically all you need to know going into this issue.

Ellis always does well will anti-social characters. On his excellent recent run on Moon Knight he managed to make us like a psychotic anti-social character. In this comic his mission is to make us like an anti-social philosopher who prefers the company of stones, and isn’t hesitant about using his martial arts skills to decapitate some bad guys. In the beginning of this issue he is recruited by Agent Coulson to come help two parents find their kidnapped child. The child is apparently an Inhuman, and in exchange for finding the child Karnak will receive a donation from S.H.I.E.L.D. to his Tower Of Wisdom philosophical foundation and the child will be trained by Karnak in learning how to use his new Inhuman abilities. Karnak also manages to teach a fearful lesson to the parents about the value of objects, as he sees children as being such in the eyes of most parents. Remember, Magister Karnak is not the lovable Inhuman, that would be Lockjaw the teleporting dog.

Gerardo Zaffino’s art is appropriately line-heavy, since this is a comic book about a character who values details and the analysis of imperfection. His use of shadow is also fantastic, since it echoes the isolation that Karnak prefers. The way character’s work in and out of the background is especially interesting since it echoes Karnak’s belief that humans are flawed and insignificant to him and in the greater scheme of things. As he explains to his students and followers at The Tower Of Wisdom “The stones matter more to the universe than you do. Even to a stone, you are nothing.”

Marvel is on a major kick to promote the Inhumans as basically the new X-Men. While battles rage on somewhat unsuccessfully with Fox Studios for the film rights to the X-Men properties it seems like Marvel has been pushing this agenda even more. The Inhumans play a major role currently on Marvel’s Agents Of S.H.I.E.L.D., and they have a movie in the works to possibly be released in 2019. The big task right now is to sell the major Inhumans to us, characters who have never been able to carry a lengthy ongoing series but have starred in some interesting miniseries and short runs, and of course play a big role in the Marvel Universe as a whole. This is a good start, as the Inhuman royal family is overdue for some spotlight series, and don’t have nearly the saturation in the comic book consciousness that any of the mutants do.

them. One way Ellis achieves this with issue one of Karnak is by using Agent Coulson as the point man with Karnak, the guy who’s asking the questions and receiving the answers that provide insight into this man that’s chosen to cut himself off from a typical life in the pursuit of his philosophical mission. While there is seriousness in this issue there is a lot of levity, some provided by Coulson and some provided by Karnak above. An example is that, after telling his followers the quote I mentioned two paragraphs ago, he follows it up with “And remember to clean the latrines.” He also has his followers refer to the phone that S.H.I.E.L.D. provided him with as the “Infernal Device”.

Karnak #1 is a solid beginning, an introduction that brings newbies and long time Marvel readers up to speed with where the character is at this point. It provides an almost perfect mix of philosophy, comedy, shadowplay and ultraviolence. Would Karnak himself approve? Probably not, only because he’d notice a corner of a page is curled up or a staple is crooked, and it would prevent him from continuing to read the comic book. Don’t let that stop you from reading this though, he’s just a very particular character that would rather stare at a large slab of rock all day.

The Fear of Missing Out on Fear