When Super Meat Boy came out in 2010, people lost their goddamn minds. It was a phenomenon. What I kept hearing was that it reminded people of the punishingly difficult 2D games from their childhood, but with a grown-up, meaty twist.

In the five years since its release, a large portion of smaller, indie-style game development has served up a similar re-mix of 2D genres from the early 90’s. Iterating on various metroidvanias and roguelikes, the indie scene has been a treasure trove for game players who grew up in the 80’s.

But Super Meat Boy didn’t look like my childhood – I found gaming with the Playstation 1 and the Nintendo 64. The games I grew up with were made of goofy, chunky polygons like those in Spyro the Dragon, Crash Bandicoot, Super Mario 64 and Jak and Daxter. Luckily, it seems that as the indie scene has iterated on some of the greatest genres from the early 90’s, it’s ready to move forward in time and rediscover the magic of the 3D platformer as well.

Yooka-Laylee, a crowdfunded 3D platformer from Playtonic Games about a chameleon (Yooka) and Laylee (the bat that clings to his head), is the first game I have seen in a long while that reminds me of what I grew up with. Made up of many of the former employees of Rare, Yooka-Laylee looks to be serving up exactly what I loved about the aforementioned platformers from my youth: big, colorful 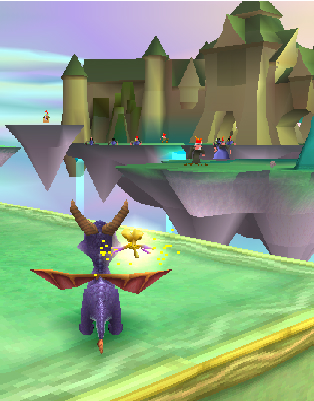 worlds to explore and a goofy sense of humor.

Additionally, the new Ratchet and Clank game, due out sometime next year for the PS4, is a gorgeous re-imagining of the Playstation 2 classic –
rebuilt from the ground up, seemingly, just for me and my fellow Millennials.

For the first time, 3D platformers are able to look like playable Pixar movies, and I am thrilled that developers like Playtonic and Insomniac are starting to take advantage of that, rediscovering a genre that has all but vanished from the gaming landscape. I think my days of feeling alienated by 2D indie games is coming to a swift and colorful end, and I couldn’t be happier.