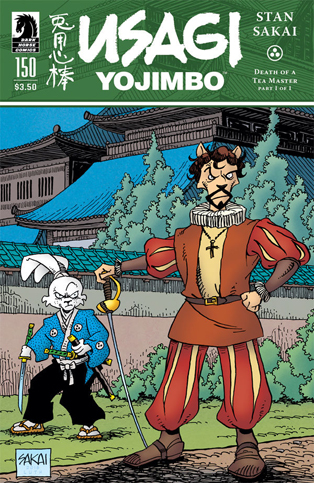 While landmark issues come and go in the world of comics it’s truly something special whenever Stan Sakai’s legendary series Usagi Yojimbo has one. The rabbit ronin has been appearing in comics since 1984, and in his own series since 1987. This is technically his 209th issue, since this series has also been published by Fantagraphics and Mirage. The dedication that Sakai has had in portraying the anthropomorphic adventure of Usagi’s Feudal Japan earns him and his series the legendary title, not to mention numerous Eisner awards among other honors. What’s really amazing is to see an independent creator with sole ownership of the characters found within the world of this series go as far with it as Sakai has. That and the fact that Sakai has always been consistent in his art and deceptively simple storytelling that is a treat for comic book readers of all ages. The peaceful meditation of the Tea Ceremony mentioned in this issue is a metaphor for how one generally feels walking through Usagi’s Japan and taking in the beauty of Sakai’s art and words. Until trouble brews, which in this issue comes in the form of a brash and sadistic Spanish swordsman and ambassador named Rodriguez.

In this tale Rodriguez defeats a number of Lord Odo’s samurai, only to then demand that Odo’s tea master and sensei Nobu commit Hari-Kari (ritual suicide) so that he may witness it firsthand. Rodriguez essentially views the Japanese as savages that can be bossed around, and gets his way until one of Nobu’s enraged students challenges him to a duel. Hint: it’s that rabbit samurai on the cover.

One thing that Sakai is always successful with is his visual storytelling, and also his ability to tell perfect tales like this one in a single issue. While there is dialogue it’s not necessary sometimes due to the fluid movement, gestures and facial expressions of characters from panel to panel, one of the touchstones of this series that hearkens back to classic comic book storytelling. There’s an arc to this issue, the heinous Conquistador being given his comeuppance at the expense of Usagi most likely bringing shame to those around him. What’s amazing is how easy it is to jump on with this series, and how it excels in that rare ability of wrapping up a story in a single issue that so few comics manage to do these days. The subtext of the brutal nature of colonialism underscores the narrative of this issue, and combined with the rich art it invites rereading, like all the best comics do.

In many ways Usagi Yojimbo reminds me of a book of Japanese folk tales and legends that my parents had laying around the house I grew up in. It was from the time they lived in Okinawa while my dad was serving in the Air Force during the Vietnam War. I would stare at the pictures constantly, trying to understand what I could from the words but often relying on the images as my narrative companion. Elements of those images and the stories from long ago remain lodged in my memory, and sometimes those elements will rise again while watching Japanese cinema, viewing Japanese art, or even reading manga and Usagi Yojimbo. I’ve read many of the issues of Usagi Yojimbo and can instantly recall the many wonderful stories and story arcs from over the years that sometimes are pure Japanese history told with anthropomorphic characters, sometimes folktales featuring demons and ghosts, and sometimes homages to movies like Seven Samurai and Lone Wolf and Cub. Sometimes it’s hanging out with the Teenage Mutant Ninja Turtles, or battling against the aliens of War of the Worlds like the recent series Senso!

No matter what, each issue they always feature the creations of Stan Sakai, a man who finds limitless inspiration in his creation from over thirty years ago. I will never stop following the rabbit ronin as he travels along the path of the samurai, as long as new material keeps coming out. It’s truly refreshing to see comic books being made that don’t hang on big gimmicks or any of the other insane hooks that publishers use to try to bring in readers these days. I go in and out of comics series, but once I entered the world of Usagi Yojimbo I’ve never been able to leave.

Thanks to Dark Horse Comics for providing me with a preview so that this review can go up the day that this issue is released. If you haven’t already go out to the store and buy this standalone issue, do so because it’s the perfect jumping-on point! 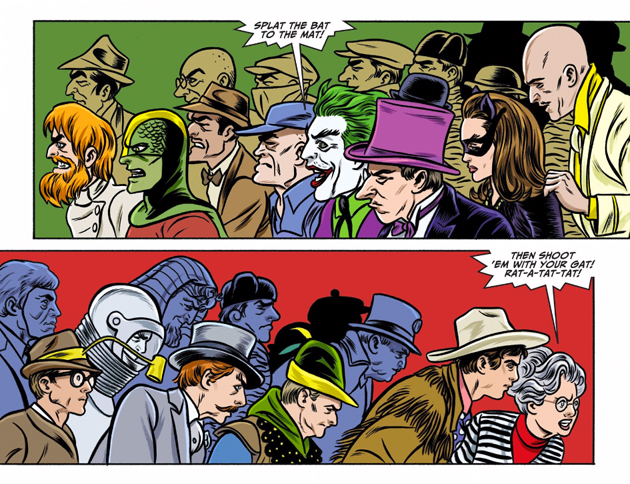 The Allreds pick up right where they left off. Batman and Robin were headed to the Crook Convention thanks to a tip from the Riddler. Little did they know that Joker, Catwoman, Catwoman and a host of knaves were waiting for the Dynamic Duo. What follows is one of the most bittersweet comics I’ve read in some time.

The Allreds could easily have relied simply on nostalgia to tell this tale, but instead they skillfully take the Batman TV series main title sequence and turn into the series’ grand finale. As Batman and Robin enter through the movie studio’s doors, they notice the walls are green. They punch a few familiar looking goons and then notice the green wall is actually Clayface (who takes the forms of some more familiar green silhouetted goons) and the story moves from there.

Batman ’66 is more than homage to one of the most iconic TV main titles in pop culture history; it’s a madcap love letter to the comics that revel in being just plain fun. It’s 99 cents. Mike, Laura and Lee Allred end the series with a helluva ride. I’m gonna miss this Batman. Hopefully we’ll see him again real soon. 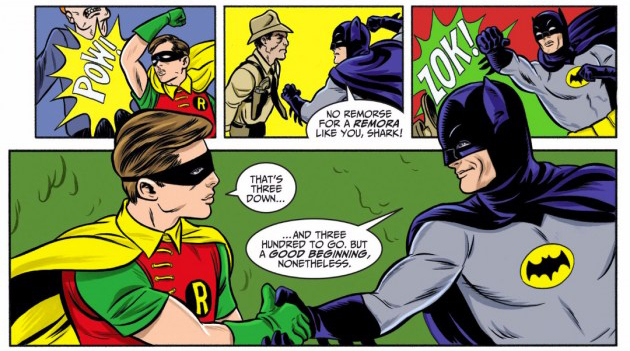