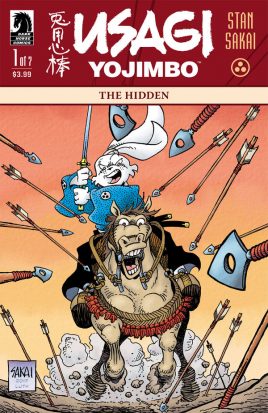 Over the years Usagi Yojimbo has touched upon religion, but mostly in passing or as a reminder of the religious customs of Japan in the 17th century. Rarely has the role of Christianity been brought up in the long and glorious run of this series. That changes with the first part of The Hidden, an exciting and thrilling issue that kicks off a miniseries told in seven parts about will deal in some ways with Kirishitans, the hidden Christians of Japan, and an investigation by Usagi into a mysterious macguffin stolen in this issue.

Things kick off with a chase on horseback, as two anthropomorphic bear men are escaping the Shogun’s guard in the dead of night. The two men are visibly ragged and weary from their travels, and it appears that they are delivery men of some sort. They are both killed but a book (possibly a bible?) is stolen from one of them. Usagi is finally introduced almost halfway into the issue. He is confused by the gate that has been erected in the night, and how he and every other citizen of the city must step on a seal on the ground bearing a cross before being able to cross through the gate into the other part of the city. At this point I figured out where we were going, but Sakai allows for some helpful explanation in the narrative anyway.

Usagi finds Inspector Ishida, one of the detectives brought in to inspect the alleyway murders. Ishida deduces that the two murdered men were of a higher class and not Ronin samurai, judging from the clothing not stripped from their bodies by the Shogun’s men. He explains Christianity to Usagi, and there’s an amusing back and forth regarding the specifics of a religion that worships a criminal. He explains that the men are Kirishitans, and by the conclusion of the issue there’s no doubt that Usagi is going to become involved in the matters of these hidden Christians.

Stan Sakai writes an afterword to the issue explaining more about Christianity in Japan in the 1500s and 1600s. It’s 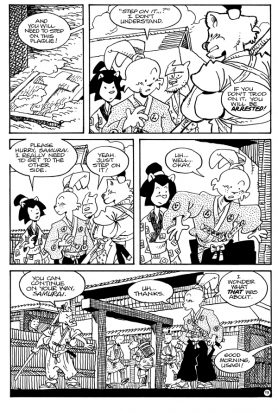 fascinating stuff that adds a lot of flavor to this first issue, which is more or less an introduction issue featuring a bonus action sequence at the beginning. All of the things that I love about Usagi Yojimbo feature in this issue: the action, fantastic art, the rich Japanese history, the humor and little green dinosaur lizards scampering about. With six more issues to go this series seems like an epic endeavor undertaken by Sakai, but with the amount of history pertaining to the Europeans and Christianity in Japan seven issues may not be enough. If the pacing continues like this issue I will definitely be on board. It’s not an easy thing to make a comic book that’s both entertaining and educational, but Sakai of course has pulled it off. This subject matter was tricky even for Martin Scorsese when he made Silence, a beautiful film that can be difficult in part because of the dense subject matter of Christianity in Feudal 17th century Japan.

Over the last few years Sakai has been shaking things up more with his labor of love Usagi Yojimbo. We are seeing aliens and Europeans in these pages, and now Christianity is heavily featured.  One thing in his afterword that comes up is gunpowder, introduced to Japan by the Europeans and heavily traded in exchange for religious conversion. How this will play into this miniseries remains to be seen, but it would be interesting if Sakai delves into the beginning of modern warfare in Japan, and how that transition would ultimately phase out the samurai by around the end of the 19th century. Perhaps with a little comic book timeline manipulation Usagi will make it to then, hopefully hundreds of issues from now. I’ll still be reading!