There’s this poem by Bertolt Brecht:

And I had always thought: the very simplest words
Must be enough. When I say what things are like
Everyone’s heart must be torn to shreds.
That you’ll go down if you don’t stand up for yourself
Surely you see that.

I try to live by Brecht’s “simplest words.” I’m known for hating Bob Dylan because I think his songs take too long to communicate nonsense. I like 15
second punk tracks and plain language hymns from the 1800s, art that’s needy with straightforward desires and trusts itself enough to just hand them to me. I lambaste obscurity as a trick for padding out having nothing to say.

By this logic I should hate Rail Slave Games. Welsh developer, Dylan Barry, has devoted his life to making weird-as-hell, maddeningly incomprehensible little religious machines. His Christian-themed FMV game, Uriel’s Chasm, has the dubious honor of being one of the worst-received games on Steam, with over 2000 negative reviews. His next game, Selfie: Sisters of the Amniotic Lens, sees players performing a looping series of gruesome, esoteric rituals involving flies and severed limbs while

sending and receiving bottled messages in a wireframe model of outer space. It has fared better review-wise, but it still remains something of a specialized taste given its finicky controls and muddy tasks.

Selfie opens with the question “What tears do you cry that are worth bottling?” and a text box for you to answer this. When I first played it I wasn’t aware of the multiplayer aspect of the game, presuming more of the high-minded gibberish of Uriel’s Chasm. I filled the box with Brecht’s-simplest-words with an almost spiteful honesty.

I crammed every ounce of my fear, pain and anxiety into the game’s gaudy font and clicked “Save.” The next time I logged in, I was presented with an avalanche of answers from other players. Strangers wished me well, thanked me for giving them the secrets I carried, and shared their own struggles as best they could. Many of them gifted me random amounts of the game’s mysterious currency as some kind of paltry compensation for my pain. I felt blindsided by an intimacy the game’s bullshit didn’t support. I deleted my message and never touched the game again.

Uriel’s Chasm 2 appears to be a stab at connecting the worlds of Uriel’s Chasm and Selfie, referencing a grander metanarrative of multiple dimensions and rituals that Barry is slowly unfolding through his work. According to the game’s description, you play as a girl who is charged with cultivating a garden of some kind while awaiting a mysterious suitor in space.

“I think you are ready to know how you came to be a steward of this floating frame,” you’re told by the strange entity Mayim (probably God; possibly a blue cartoon bear in pink sunglasses banging on some drums): “the importance of the water you swim in, and the water that swims in you.” It’s stylized as a ROM hack, with a throbbing soundtrack that ramps up the clashing colors and aggressive text. I’ll tell you the truth: I rolled my eyes.

“I see you,” I said to the game. It wasn’t the honesty that the other players brought to Selfie, the Brechtian-simplest-words a tiny community can give each other. “This is more Rail Slave,” I said with foolish sagacity. “This is nonsense.” 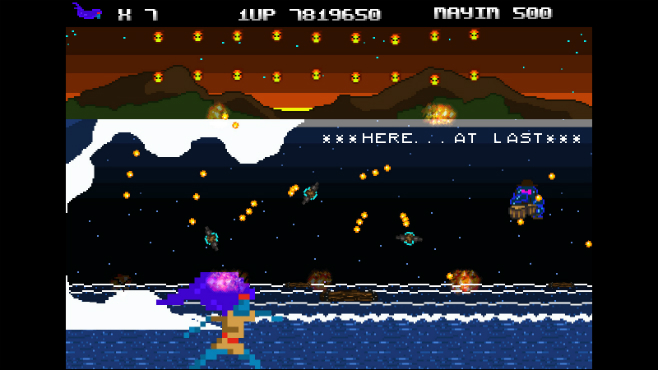 The first level is a bullet hell against an ugly alien that spews fruit at you a la Super 3D Noah’s Ark. It is imprecise and unpredictable, throwing you in utterly blind. I played it for an hour until my back ached and I had to DM the developer for advice. He explained the intentionally obscure menu that takes up half your screen, which features animated meters measuring “graze” and “risk.”

The risk meter fills up the closer you get to the boss, giving you more time on your bombs. The graze meter is fed by colliding with the edges of the monster’s fruit; fill the bar and you shoot out an arsenal of colorful, powerful damage. After having this explained, I wondered if it wasn’t some kind of statement about the risks and rewards inherent in getting closer to God, being fed on the one hand while risking destruction on the other. 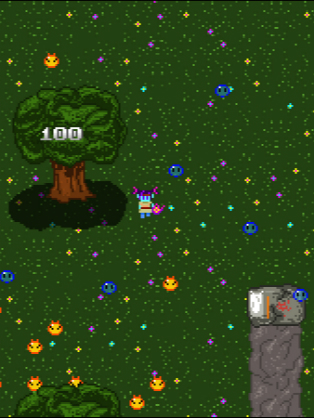 “Okay,” I said. “That could be cool. This could be okay.” And then I died a whole bunch until I randomly managed not to.

After a garish reward screen full of fruit and bears I was shuttled to some weird JRPG where a technicolor Link-alike character asked, “Are not my offerings of fruit good enough for you, Father? Sometimes I wish I could see you, hear you even.” There was another bizarre menu full of blobs and numbers and symbols that turned green and then red and then black and then I died. And then I had to start over from the very beginning, facing that damn bullet hell all over again only to die in the JRPG. Finally the text obtusely suggested I might try putting out the fires that plagued the level’s trees with the ammo I had, which, apparently, was supposed to be water.

“Fuck you, game!” I shouted at some point, pushing my keyboard away. “Fuck your noise, Dylan Barry! WHAT DO YOU WANT?!”

“What do you want?” is the question Uriel’s Chasm 2 shouts at the churning void of God. It asks how you know what God wants and whether it’s worth the offering price. It asks what God rewards you with for your devotion, why God’s covenant is so often just more things to suffer through. It’s Jesus at Gethsemane before the Resurrection plays out, a cry for comfort that goes unanswered under the guise of love. It wants you to plead for meaning over and over, climbing the same hurdles with a new understanding of how little you understand. It wants you to chase after a space where your wants and God’s wants might meet, if such a thing is possible or even desirable. It feels how the hardest parts of faith feel, like the most gut-wrenching prayers and desperate, on-your-knees bargains. It is obscure because God is obscure, because religion is obscure, because faith asks everything of you while still making no fucking sense.

There’s a theological tradition to Rail Slave’s games. There are hints of Rudolf Otto’s God as Wholly Other; there’s the ouroboros logic of Thomas Aquinas. Barry’s games are God as seen by John Calvin: capricious, unreasonable, ugly. They’re incomprehensibly unfair Old Testament punishments like turning into pillars of salt or suffering the afflictions of Job.

But when you meet them where they are, when you submit to their demands instead of demanding they be what you want, their ways unfold themselves with an almost unbearable gentleness. Under the bombast and style is an earnestness we seldom see in games today, a devotion to wrestling the numinous down into the human realm. And then having it wrenched from your fingers and having to sit through another long, dark night of the soul, asking yourself if it’s worth it, asking yourself if it’s even real. It’s doing this over and over until something clicks, until whatever you get is hopefully what you need, even if it isn’t what you want.

Uriel’s Chasm 2 is not Brecht’s-simplest-words. In fact, if there were someone whose personal mission was to hunt down my poetic credo and shit all over it, it would be Dylan Barry. But it does what I want art to do. It tore my heart to shreds.

Uriel’s Chasm 2 is available on Steam on November 13. A review copy of this game was provided by the developer.