Robert Venditti is definitely taking a page out of Geoff Johns’ book by delivering an epic story. Granted, Johns did a lot with Green Lantern, and how many crises can one man really face down? But there’s a desperation to Hal’s situation, one which I hadn’t seen in Johns’ writing and one which shows Venditti as a fearless creator who isn’t afraid to push his characters to their limits. 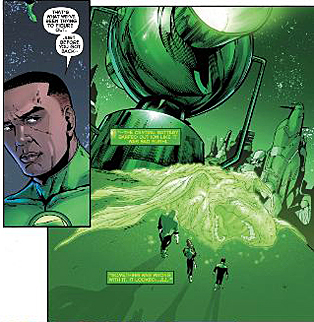 I was a bit disappointed with Relic when his origin was revealed in Green Lantern #23.1. He didn’t strike me as a villain with the same staying power as Sinestro, Nekron or Black Hand. He was a jaded scientist with an opaque mission aimed at controlling light spectrums.

This was, however, before I saw him in action.

By the end of Green Lantern #24, Relic has left the Corps in much more dire straits than it’s been in before. Whether it was battling the undead or taking down its own supreme leaders, the Corps never seemed in danger of being completely destroyed until now.

I would hate to see Venditti resort to some hidden trick like another Oa that the Corps can populate, or a hidden central battery that can fix all their issues, because that would cheapen the suspense he’s built. But I don’t see how the Corps can fight its way out of the situation it finds itself in at the end of this issue.

Plus, Billy Tan makes Relic appear a lot more imposing. In his initial appearance, Relic looked weak and timid. Here, however, he looks pissed off. For starters, he’s huge – like 20 feet tall, and he looks at the Corps members as if they’re a bunch of ants. I love the change from then to now, as Relic finally looks like the villain he’s meant to be.

The Green Lantern members, however, lose some of their clarity. Faces don’t look as sharp, and some characters are disproportioned. But Alex Sinclair’s colors really make the comic vibrant, and despite the lack of sharpness, the imagery looks polished.

I like what Robert Venditti’s doing with Green Lantern so far. He’s made the comic his own and really set the bar high by showing that, like his predecessor, he’s not afraid to take risks. Given what he’s delivered, I’m sure we’re in for a great show. I only hope that Venditti can deliver on the epic he’s promised. 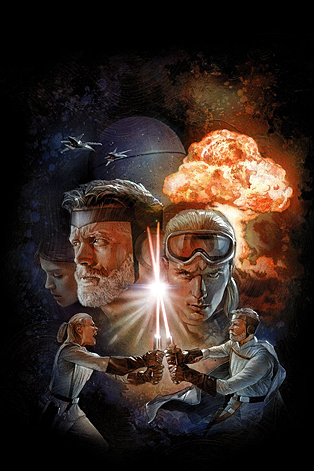 J.W. Rinzler and George Lucas have something in common: pacing issues. The Star Wars is definitely a novel idea, and I’m more than happy to be pulled back into the world of Jedi, droids and intergalactic war. But the second issue of the series stumbles along inconsistently, becoming more of a frustrating read than a different lens through which to view a beloved property.

Rinzler does some things well. I enjoy his characterization, as he’s clearly trying to show the grizzled sagacity of General Luke Skywalker compared to the reckless and immature nature of his Padawan, Annikin Starkiller. Believe me, Rinzler’s Annikin gives a much more believable performance than any of his real-life counterparts, particularly in how unfocused he is.

But the herky-jerky narrative breaks up an issue that is really meant to be pure action. The rebels launch their first offensive against the Death Star, but this attack is interspliced with narration by Skywalker, serving only to distract from the story. Translating such a battle is difficult anyway, but breaking up the visuals with constant running dialogue only makes the attack feel long and nowhere near as exciting as it should be.

On a more positive note, however, Mike Mayhew’s Alex Ross-like art is phenomenal. Images are rendered with impeccable clarity, sharpness and detail. Given the abstract nature of the set pieces, Mayhew brings Lucas’ world to life with impressive realism. Even though we don’t see much of Darth Vader, he still looks incredibly imposing. Though we have yet to see him in his full costume, I’m sure that his appearance will be every bit as powerful as we hope it is.

My love of the original Star Wars is what’s keeping me invested in The Star Wars. The comic can be a frustrating read, and the quick shifts in moments and awkward transitions between scenes are distracting. But the issue is fun to look at, and hints at much, much more to come. I only hope the storytelling is cleaned up in future issues. 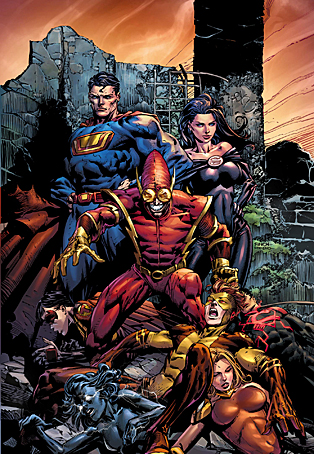 Bannen’s Book of the Week: Geoff Johns is all about the kernels, isn’t he?

While Forever Evil #2 is more setup for the future, Johns peppers the issue with foreshadowing, from Superwoman’s baby, to Power Ring’s sickness, to the mysterious man tied to the chair. Johns builds the mysteries like some deranged architect, delivering a story that is maddening in how much potential it opens up in the DCU.

We still see the Crime Syndicate’s control over the Earth, but it’s very subdued compared to the previous issue. Johns scales back on the action to focus instead on characterization and plot development, both of which are well done, if a bit of a tease rather than a delivery. I like watching the Crime Syndicate building towards its ultimate plan, but I’d like to see them battling it out with the heroes of Earth, wherever they may be.

While Johns has yet to reveal what happened to the Justice League, he at least gives readers a clue to their presence. But this comes far too late in the issue to have any real impact, and instead the true climax of the comic is wasted, making the resolution feel like a stutter step. That being said, the reintroduction of Lex Luthor’s war suit as well as the new Bizarro are both scintillating moments that offer much excitement for the rest of the series.

Plus, David Finch’s work is top notch. Pages are mood-heavy and shadowy, and the intensity of certain moments is increased due to his shadowing and shading, particularly when Luthor and Bizarro are revealed for the first time. Richard Friend really aids the cause with his inks, and faces look sharper than usual, especially for Finch.

I feel like this was an issue that needed to happen in order to get the plot moving again. It definitely comes to a churning halt in this issue, but now that the groundwork is laid, Johns can let loose again and deliver in his usual grand style. The next issue promises to reveal the fate of the Justice League as well as showing how Luthor makes his play against the Crime Syndicate. If Johns has done any one thing well, it’s to show that Luthor is a formidable opponent. While we know he isn’t going to fight for the heroes, we know he’s fighting for himself.

And for Luthor, that means all-out war, and I for one can’t wait to see what he does.