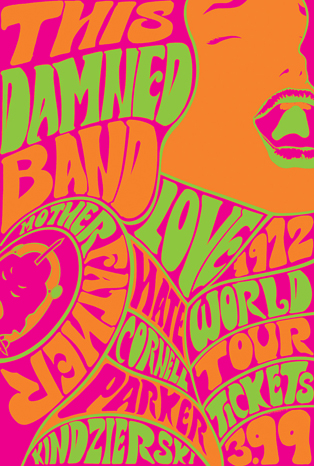 I was skeptical when I first heard the premise for This Damned Band. I had to flip through (or more accurately for my digital copy, scroll through) the entire issue to see if I would like it or hate it. I have a very strong dislike for hero worshiping bands, especially the stereotype of the ’70s “classic rock” out-of-control, hard-partying, yet soulful “artists.” Bands that take themselves too seriously, that have groupies, have “riders” and seem like something out of the movie Almost Famousare an instant turn off. I’m not sure where I stand after this first issue of This Damned Band, (I smiled more than felt any bile rising) but I’m still skeptical.

The band Motherfather is one of these self-important bands. Sex, drugs and rock and roll are their business, and business is good. There are so many groupies that a hierarchy within has been established. Their manager makes outrageous demands for their rider (a pony?). Motherfather sing songs about worshiping Satan, but counter to their cheese ball look, they may actually do so.

OK, so if Motherfather are this clowny to make a point, then I say bring on the schlock. Something horrible has to come from their association with Satan. I say this not from any religious or moral standpoint, but to reinforce that horseshit rock star idolatry deserves all the bad that can be heaped upon it for my amusement. Advance press compares This Damned Band to This Is Spinal Tap, which gives the book potential, but I don’t see the likeness yet.

I’m interested enough to come back for another issue, and I hope the creators dial up the insanity to a Tap-ian 11, or at least have a drummer explode.  Let’s bring this up from the level of Smell the Glove. 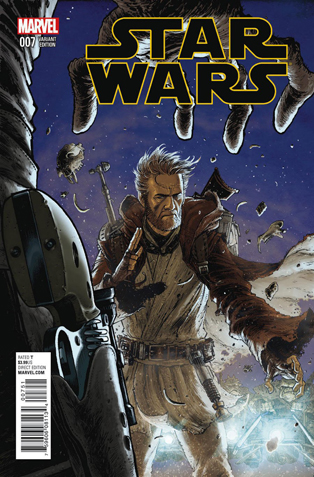 I don’t think it’s any secret that I’m a big fan of the work Marvel’s been doing with the Star Wars license. The first six issues of their core Star Wars book involved a caper in an Imperial weapons manufacturer, a daring escape and Luke’s first encounter with Boba Fett. Is it fan service? Sure, but they’re also super fun comics!

Star Wars # 7 picks up after Luke’s battle with Boba Fett.It’s a quiet moment. Now in position of Obi-Wan Kenobi’s  journal and headed back to the fleet in his X-Wing, Luke takes the time to read up on his mentor’s time in exile. The book begins with the kind of scum and villainy one would expect on Tatooine. A group of Jabba the Hutt’s goons are stalk Mos Eisley and the area around it, stealing water during a severe drought.

The shocking thing at the start of this story is that Obi-Wan does nothing to help the farmers. His exposition along with the heavy shadows Simone Bianchi blankets across Obi-Wan’s face portray a Kenobi we haven’t really seen. He’s defeated and lost. He wanders the Jundland Wastelands – his only duty is to look in on his best friend’s orphaned son.

Reading this issue reminded me of Star Wars # 24 from the original Marvel run. It was a flashback tale about Obi-Wan during the heyday of the Jedi. There was a time when we didn’t know much about Obi-Wan Kenobi so that particular issue was a huge revelation back then. Aside from Star Wars and maybe the novel, Splinter of the Mind’s Eye, there weren’t a lot of stories about the guy.

It’s strange to see Obi-Wan so alone, wallowing in his own self-pity. Reading a comic that sheds light on a fairly unexplored portion of the hidden Jedi Knight’s life is rare. After all, we live in a world where he was in three prequels and starred in a 100+ episode cartoon series. Who’d have thought there was another layer to peel away?

Jason Aaron and Simone Bianchi tell a hidden gem of a tale in Star Wars # 7. I hope to see more of these interludes throughout the series!