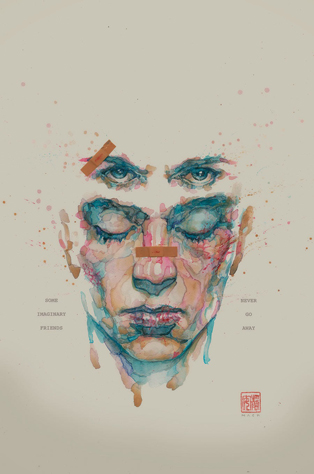 When Fight Club 2 begins, the anonymous narrator from Palahniuk’s Fight Club is a shell of his former self. He has taken the name Sebastian and has become everything his anarchist alter ego, Tyler Durden, espoused against. Hell, Tyler and his Project Mayhem goons would call him pathetic. Sebastian and Marla Singer are married. They have a son (born from one of Tyler and Marla’s epic fuckfests). They have a house in generic suburbia. They seem to have put the events of Palahniuk’s novel behind them.

Sebastian and Marla are at a very similar spot to where they were at the start of Fight Club. Sebastian is on a bunch of psychotropic drugs, keeping Tyler at bay. Marla is increasingly bored with suburban life – so bored that she crashes a local Hutchinson-Gilford progeria syndrome support group and starts messing with Sebastian’s pills. Their son is unnamed and sits in his room, making homemade gunpowder out of the neighbor’s dog poop.

Fight Club 2 # 1 is very much the first chapter of a larger story. Palahniuk’s script sets Sebastian, Marla, their son and Tyler to collide with disastrous results. The issue alludes to the novel’s more insidious ending. Project Mayhem lives and it’s grown in the age of high speed internet and Men’s Rights Activists. That is terrifying!

Cameron Stewart’s art is fluid – his storytelling is top notch. Sebastian is completely clueless as to what’s happening around him – at least at first. Seeing him slowly realize how empty his life is and confronting Tyler’s return is some wonderfully nuanced cartooning. Combined with Dave Stewart’s masterful coloring, the art in this book

Fight Club 2, like its predecessor, has all the potential whip smart and brutal satires of consumer culture and evolving social views on masculinity. The world of 2015 is much different than the late 1990s. Communication is instant. Just imagine what kind of Mayhem Tyler Durden could wreak with social media. 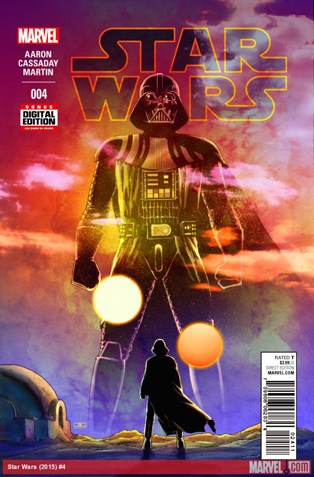 The Star Wars Universe. Initially this phrase brings with it an instant image of grandeur, of galaxies far, far away full of worlds teeming with unique exotic, and sometimes repulsive alien life. In the original trilogy George Lucas and a multitude of collaborators introduced this universe through the eyes of a small group of friends and rebels, and didn’t even spend time on Tatooine for one whole movie! A universe separate from our own, and events that transpired long ago. It should be full of possibilities, more vast than our imaginations can even begin to comprehend.

Why then, does it feel so small?

That’s more of a general rant than anything else, but to a degree it’s true. After Luke and the crew finally get off the junk planet where the Imperials are building weapons we spend a lot of time on Tatooine, and a little bit of time with the rebel fleet. Sure this issue is just setting up things for the next series of adventures, but it appears that many of those adventures will be taking place on Tatooine. It’s hilarious since in episode 4 Luke himself says about Tatooine that “If there’s a bright center to the universe, you’re on the planet that it’s farthest from.” Maybe that’s the ultimate joke of Star Wars, for all the things we could be seeing we’re going to be spending most of our time in the most boring place. It’s like if aliens landed on Earth for a month and spent 20 days in Delaware.

That said, this issue is still fun. Jason Aaron is doing a great job with the characters, and his dark humorous voice is still in the undercurrent of these events. While a sequence with Darth Vader hanging out at Jabba’s Palace and on his sail barge seems redundant after Darth Vader #1 it’s worth it for Vader’s haughty disgust at how much of a depraved and decadent slob Jabba is. It also adds dimension to Vader’s character, that while he is the blunt weapon of the Emperor he is also a conflicted noble warrior who has lost his way, and is slowly regaining awareness of the man he was.

Elsewhere we see some Rodians fail to intimidate a mysterious new bounty hunter character, and a glimpse of an item in Obi-Wan’s hutt that is inscribed with the message “For Luke”. We also see some of the workings of the Rebellion, as Leia grows into her role as leader. Oh, and (SPOILER) Boba Fett shows up, as we knew that was inevitable. While some of this is cool, some of it is a little too “Star Wars greatest hits.”

John Cassady’s art continues to be good overall. He draws the hell out of these worlds, and I love his renditions of the various alien species, since he can really cut loose with drawing them. My biggest gripe are the renditions of the human characters from the movies sometimes being too photorealistic, and other times completely not. It’s jarring and hopefully will pan out in time. Also Jabba’s size has always thrown me off, so it seemed weird but ultimately a nice visual touch to have Vader tower over him in many of their scenes together. Jabba’s oblivious arrogance in the face of a man-machine who is a master practitioner of an almost extinct ancient religion is laughable but helps flesh out the idiotic mistakes he makes later on when he’s taken down by our ragtag little group of rebel heroes.

Overall, I liked this issue. I’m curious where this story of Luke finding out about his past is going, but I guess I’m ultimately frustrated by the limits of what is essentially a prequel to Empire Strikes Back. We know Luke won’t find out the truth about his father, and we know certain characters will come painfully close to interacting but cannot, because then it would make their interactions in the forthcoming movies seem really off. What I really hope for is that we see some universe building beyond what is essentially four worlds.

With the Expanded Universe downgraded to non-canon “Legends” status there’s a lot of opportunity to really flesh out this rich universe. It’s a tricky balance, because I also love the character work that these comics can delve into, and I think Jason Aaron is doing great work with the characters and hope for that to continue. What I worry is that the EU being obliterated by Disney’s Death Star has led to a fear of drawing outside the lines, and we’re always going to come back around to familiar story beats and “Star Wars greatest hits”.

I believe it was Yoda who once said “Fear is the path to the dark side.” 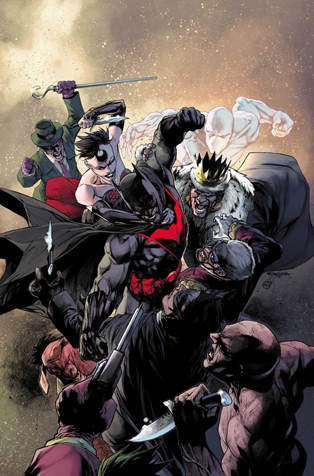 Comic fans have come to expect “events” every two or three years. Let’s face it – they sell comics. Readers like to be involved in the epic stratosphere of their favorite series as it’s a reminder that the worlds are interconnected and when they do come together, cool things can happen.

Unfortunately, Convergence is on the other side of this spectrum. It’s not that Convergence #3 is bad. It’s not. It’s just that for three issues the series hasn’t gotten into the purpose of its premise, and now this lack of a goal or motivation is more like a bad joke than a tease for the future.

I hesitate to say that the characters aren’t interesting because they are. Well, I think they are, but I’ve also been following Earth 2 since its inception. Readers who aren’t as familiar with the characters may find the lack of main heroes a bit unnerving as they don’t have as clear a connection as they would with Superman, Batman, or Wonder Woman. Granted, versions of these characters appear, but again, without the requisite background knowledge, readers are forced to make tenuous connections in a series that is meant to be a tent pole for DC.

This issue is more of the same as the story is no closer to divulging its purpose, and the characters are no closer to accomplishing their goal (whatever that goal may be). I think it’s to defeat Telos, but again, there’s no clear arrow by Jeff King that says “this is the purpose of Convergence.” This comic, like the others, is more of a build up than a real barn burner, so by the time the action hits – in the last five pages – I’m not as invested as I would be have I been given something to keep my attention earlier.

Convergence #3 splits its story into two parts, one focusing on a group of heroes making their way to the center of the planet on which they’re stranded in order to unlock some secret power hidden beneath, and the other focusing on Thomas Wayne, the Batman from Earth 2, and Dick Grayson. King’s best writing is at the end of the issue when some of Batman’s nemeses track him down, and Dick is left to fend for himself after being brutally attacked, but the climax doesn’t carry a lot of weight given the slow pacing and lack of true urgency.

The art, though, is an improvement and I enjoyed Stephen Segovia’s clean styling. He has a good eye for shadows and so while the comic doesn’t have a pressing desire to accomplish a goal, the art at least gives a bit more emotion than the writing. Telos and Superman really get the best imagery and, finally, the villain is looking formidable, even if he isn’t acting that way.

Convergence needs a good kick in the pants to really get readers excited. The tie-ins, by and large, have been excellent, so it’s disappointing to read the main series and see that it lacks the same excitement and energy. DC’s marketing strategy seems a bit backwards here as the main comic should be the real draw, and not the other way around. While I’m really enjoying the Convergence one-shots, the lead series is failing to keep me engaged and unfortunately, we’re almost halfway through and have nothing to show for it.

Hopefully, this will improve, but major change needs to happen for this series to right itself.