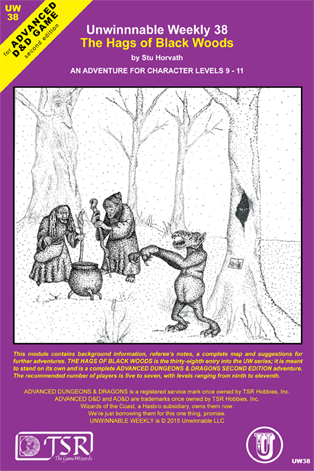 Background
Centuries ago, the noble house of Csintalan collapsed, leaving their hereditary lands in chaos. Already remote, the region became a backwater haunted by bandits and monsters. By far, the worst was a covey of hags who were not content to merely steal or kill – they delighted in sowing terror. People would snap and murder their spouses, or find their children turned into livestock. Sometimes, a person would get up in the middle of the night and wander into the woods, never to be seen again. Sometimes, though, they would come back. It was never good when they came back.

After many months of this, only the most stubborn farmers remained. A wandering druid found these gnarled, furtive people, huddled in their farmhouses, sick with fear, and took pity on them. While he could not drive the hags off, he could teach the people to protect themselves. With secret rituals and invocations to the earth, the druid raised a mystical wall around the hag forest, trapping them inside.

So long as the farmers, and their descendants, maintained certain ceremonies on the longest day of the year, they would be safe…


Getting Started
The easiest way to coax PCs to the village of Twelve Trees is through rumors of Csintalan Castle – haunted, untouched for centuries and no doubt full of loot. At this level, a ruined castle may be tempting for characters that intend to build a stronghold. Alternately, Twelve Trees makes for a good stopover when the PCs are travelling to another location. Once they see the circle of trees or butt heads with the locals, it shouldn’t be too difficult to entice them to dig deeper. If they do need extra encouragement to investigate, the disappearance of a fellow traveler from the inn should do the trick.

Any mix of characters should work, though having a thief and one or two mages is recommended. Specialized characters are also preferred – when my group played through this adventure, there were three dual-class characters, which might have made some encounters more difficult than they ought to have been. Having a druid or ranger in the party is helpful, but not necessary.
All treasure, with the exception of a few key items (Hag’s Eyes, Vanya, Bag of Beans), was rolled for randomly. If they don’t suit your campaign, just switch ‘em up.

Finally, please note that as presented here, the Night Queen is designed as a recurring villain and is too powerful for the PCs to effectively engage. Her statistics will need a significant overhaul to make her a fair challenge.

Arriving at the Inn
For whatever reason the party visits Twelve Trees, they arrive at dusk.

As the sun begins to dip below the trees to the west, the forest gives way to open fields of malnourished crops and ramshackle farmhouses. Continuing on the road, you arrive at a collection of run down cottages clustered around a large building of wood and stone. It is clearly the oldest and sturdiest building in town. It seems rather inn-like, despite the lack of a sign. There is a large stable on the eastern side of the building, which also contains a small smithy. To your eye, there are no temples, merchants or official buildings in town.

Horses can be kept in the distinctly uncrowded stables. The smith, a hulking, hunched man name Vass, will take care of them for one silver piece each.

Inside, the common room of the inn is warm and inviting. Men and women, farmers all, or so you assume, have gathered for dinner. It isn’t festive, really, and the conversation barely rises above a hushed buzz, but it is not the taciturn crowd you expected. The food smells even better.

An older man, as broad as he is tall, approaches as soon as you walk in. He is balding and wears a greasy smock, but the lines on his face indicate that he is prone to smiling. “Hello there, travelers! My name is Vastag,” he says, extending his meaty hand. “Welcome to my inn!”

Vastag and his younger brother Vass, run the inn with the help of their wives and sons. The inn is well appointed, but old – the second story is sealed off for lack of use. There are only three rooms available on the first floor, for a gold piece each. They will sleep two PCs each. Additional PCs will have to sleep in the common room, for five silver pieces. A hearty dinner and breakfast is included in the price.

Vastag is too busy to talk until the villagers clear out, about an hour after dinner. Attempts to converse with farmers get nowhere. If tensions escalate, Vastag will keep the peace, first with practiced joviality, then with a shillelagh if pressed.

When things have quieted down, Vastag is more than happy to talk – visitors are a cherished rarity in Twelve Trees. In addition to being the innkeeper, he is also the de facto mayor, collecting taxes on behalf of the king, handling mail, keeping the peace and providing what little government the village needs. Despite his family having lived in the village for four generations, though, the farmers still, in many ways, treat him as an outsider. If asked about that, he’s philosophical,

“It is a hard life, farming here. And there is a weight of history, too. Bad things happened here hundreds of years ago and the memory of that got handed down, generation after generation. That separates them from us.”

He maintains that the region is largely peaceful, though, saying,

“There isn’t much trouble to be had in these parts, aside of the bandits, but they steer clear of the town, even in winter. The locals have a particular terror of the hags in Black Woods, to the east, but I’ve never seen one. I don’t think my father ever did either. When I was a child, I remember some ogres stomping out of the woods and stealing some cows, but that is the worst I can recall. More vicious monsters have come out of the regular woods to the north and the west than I’ve ever seen come out of Black Woods. But every once in a while, we get word that a traveler has vanished. The past, maybe, isn’t so far gone after all.”

Vastag can also explain the name of the town (see below) and can provide directions to the grove. He knows little about the villagers’ religious practices and isn’t interested in changing that. He has seen the ceremonies that take place on midsummer, but only from a distance and he assumes there is some correlation to the relative safety of the town, but he remains incurious. “My father always told me to stay clear of the local druids. So I did.”

The Grove
The grove from which the village takes its name is situated on hill a two-hour hike due east from the inn. It can be seen clearly in the distance when the sun is up.

The hill rises from the fields of waist-high grass. There are twelve trees here in a ring, planted ages ago to line up with the movements of the planets and stars, like a ring of standing stones. Now, the trees are massive. Each is a different: oak, maple, elm, chestnut, walnut, cherry, birch, hickory, poplar, linden, willow and magnolia. Each is beautiful and majestic, the most impressive example of each that you’ve ever seen.

There is also a distinct feeling of magical power here as well, a kind of imminence, like knowing lightning is about to strike moments before it does.

Further east, you can see the dark tree line of Black Woods. A short way southeast is a large boulder that, weirdly, appears to have a wooden door set in its side.

This is obviously a place of great natural power, the sense of awe is palpable, but it is distinct from the experience of rangers and traditional druids. This is something different, but the details are impossible to ken without more information.

The Root Cathedral
The boulder is a massive chunk of rain-worn granite about eight feet tall and fifteen feet in diameter. On the side facing the grove is a sturdy door of iron-banded oak.

1. Inside the Boulder
The door is locked but not trapped.

Inside the boulder is a small chamber, a landing really, for a set of stairs curving down about twenty feet into the earth. The stairs lead to a worked stone corridor that goes about a hundred feet before ending in another (locked) oak door.

2. Creeger’s Guardpost
No matter how hard they try to be stealthy, the guard on the other side is alerted to their presence by the Harvest Mask he wears.

On the other side of the door is a landing and more stairs curving down. To the left is a narrow hallway, within which stands a large shirtless man holding a broad ax and wearing a strange mask made of corn stalks and grain. He makes no move to attack, but also doesn’t look welcoming either.

This is Creeger, the guard of the Root Cathedral. While tougher than most, he’s no fool and has no intention of attacking an armed party of adventurers. He will first attempt to drive the party off by claiming they are trespassing. If they insist on pressing ahead, he will not attempt to stop them. If left alone, he will slip out to gather reinforcements.

The rooms behind him are his quarters and a small kitchen that contain nothing remarkable.

In the unlikely event that it comes down to combat, treat Creeger as an unremarkable 5th level human fighter. Should they kill the man, his mask is a magical item.

3. The Ritual Chamber
Creeger will follow the party unless restrained or otherwise subdued.

The stairs twist downward another several hundred feet before opening up into a large cavern. Roots, long and massive, hang from the ceiling, the larger ones like arranged like the architectural features of a nave in a cathedral, the smaller ones hanging like drapes all around. In the center of the chamber is an altar. The air smells of rich earth.

The altar is a massive block of solid stone etched all over with strange symbols. A deep groove runs around the perimeter of the slab and ruddy brown stains mar the grey surface. There is, again, a powerful magical aura here, but whether it is arcane, divine, druidical, or something else entirely is not clear.

Rowdies
At some point, whether on their way up from the Root Cathedral, out of town or out to Black Woods, a group of townspeople in Harvest Masks ambush the party.

From out of nowhere, a cudgel whizzes within inches of your face. Wielding it is a wiry man, naked to the waist and wearing a mask made of twigs and ivy leaves. He stinks of booze and sweat. And he isn’t alone – as if from out of nowhere, there is a mob of masked figures waving clubs.

One shouts, “We don’t need outsiders in our business!” Another clumsily throws a rotten tomato in your direction. It lands at your feet with a dull squish.

The mob outnumbers the party three to one. They are content to jeer and throw vegetables at the party as long as the PCs retreat. All other paths – attempts at discussion, pushing through them, intimidation – will lead to a brawl. As the entire crowd (except Creeger, if he is present) are zero level humans, this should lead to only minor bumps and bruises for the party and serious concussions for the thugs.

You’ve been reading an excerpt from Unwinnable Monthly Issue 38.