I’m just going to get this out of the way right now – Shaun Simon and I have been friends for a long time. We first met outside of John “Hambone” McGuire’s house circa 1998 or 1999. We smoked a lot of cigarettes and I found out he was a big fan of post hardcore band At The Drive-In. My first impression of him was that he spat a lot. He still does, actually, but his proclivities towards using the ground we all walk on as his personal spittoon is far from what encompasses Shaun Simon.

I walk into Shaun’s home, intent on starting the interview but he stops me. “You gotta see this, man.”  He proceeds to turn on the TV. There is a woman who looked like my 4th grade social studies teacher talking about bootleg designer handbags. He then stopps it and switches to a program about tucked away bed and breakfasts in Maine.

“Wealth TV,” he says, laughing. “It’s so low budget! It looks like it’s shot on your iPhone.”

The Silver Age is what interests me the most, honestly. The wackiness and the craziness – throwing around these ideas like it’s nothing, I love that stuff.

We continue to watch for about 10 minutes, perusing Wealth TV’s on demand menu. Every bit has all the production quality of a Power Rangers episode but with none of the kitsch. This led us on a tangent in which we come up with our own TV show, “Fucking Luxury.” In the series, we’d pick up random strangers on the street and see just how luxuriously they could live on whatever money they had in their wallets. It’s a million dollar idea. Don’t steal it.

This is how a typical conversation with Shaun goes. On the outside, he’s a family man with a regular job. Once you get to know him though, the layers begin to peel and Shaun becomes a sort of mad scientist of ideas.

To the comics business at large, Shaun is a newcomer. His first published comic book work will be in May’s Dark Horse Comics Free Comic Book Day Special. In June, the first issue of The True Lives of the Fabulous Killjoys hits the stands. Gerard Way is co-writing and Becky Cloonan is drawing both the special and the series. That’s some damn fine company to be in! Shaun’s path to comics, like a lot of people in comics, is its own unique blend of determination and happenstance.

“I was into comics when I was little. I never read them, but I liked looking at the pictures. I loved the idea of putting a mask on and becoming someone else. In the majority of my childhood pictures I always have on some sort of costume, ” Shaun tells me as we sipped coffee at his kitchen table.  “I had a bunch of my dad’s old comics from when he was younger – Incredible Hulk, Justice League of America and Amazing Spider-Man – mid to late 1960s books. The Silver Age is what interests me the most, honestly. The wackiness and the craziness – throwing around these ideas like it’s nothing, I love that stuff.”

We take a trip to Shaun’s local comic book shop. While we perused the new books on the stand, Shaun points me to The Zaucer of Zilk from IDW and 2000 AD. “That’s Brendan McCarthy doing this crazy psychedelic stuff, it’s great.” He then perused the shelves and snagged Saga Volume 1 and Multiple Warheads # 1.

Shaun wasn’t always pointing out books like Zaucer of Zilk. Like as lot of us, there was a time when Shaun fell out of comics for a few years. “I phased out of [comics] for a while. I did the whole skateboarding thing through high school.” Indeed, it was only about two years after our first meeting that Shaun started to get back into the comic book game. 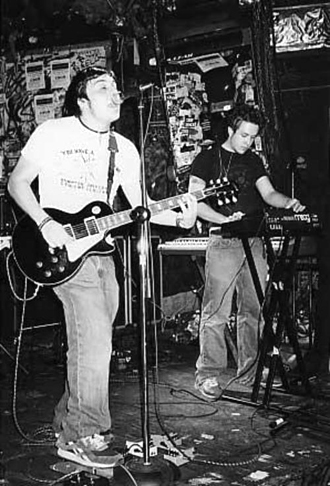 Shaun used to play in a band with Unwinnable’s, John “Hambone” McGuire. Being that New Jersey’s music scene is pretty small, it was only natural that Shaun would eventually succumb to the comic book talk of Hambone, his future co-creator and numerous other kids in the scene. That, and going on tour with My Chemical Romance, reignited his interest in comics.

When he got back into comics, the first thing he read was Batman: Year One by Frank Miller and Dave Mazzeuchelli. “It was awesome! And from there it was Dark Knight Returns and Watchmen and that whole 80s group of greatness. And then I found Grant Morrison. Doom Patrol, to me, was kinda like a gateway drug because it opened the doors to everything that was going on at Vertigo at that time – Peter Millligan, who I love, and his Shade The Changing Man and Enigma and Neil Gaiman’s work -that whole 90s Vertigo groove was what really inspired me to want to do comics. And Jack Kirby! He was so ahead of his time. He took these outlandish concepts and brought them to such a ground level playing field. He made everything work. I’m really glad they ended up doing those reprints a few years back”

Batman, especially Year One and Dark Knight Returns, always bring people back into the fold. I ask Shaun where he could see himself in the comic field after Killjoys. “I’m doing comics because it’s something I really want to do and love to do. I have a day job that I like and that pays the bills. I never want to look at comics as a job. I know it’s not appropriate to say because it is a lot of work. Creators put in a lot of time and energy into making comics. Whether it be time spent in your own head, zoned out from the rest of reality, or spent behind a computer or pencil, it is a ton of work. But I never want to think of comics as just paycheck because at the end of the day there are a million different ways to put food on the table but there is nothing like comics. I really love the idea of doing my own stories with my own characters-just doing my own thing. I also love that with today’s comics industry that you can do your own stuff and also do established characters. If I could make a living writing comics, I’d drop my day job in a heartbeat.”

“I met a lot of the Dark Horse crew at New York Comic Con and they all feel like one big family. Everyone there, from Sierra Hahn, our editor on Killjoys, to Scott Allie, the editor in chief, has been so supportive of us and this book. They really care about their creators and the fictional characters and worlds we throw at them. I really like their vibe.”

We continue to talk about influences and get to talking about Evan Dorkin. “I got to meet him at NYCC. I never met him before, but we sat down and I just took everything he said in. That dude is incredible. His timing is so perfect. I could sit on the floor all night and just listen to him talk, you know?  Meeting him is what made me want to read his stuff ’cause he’s an incredible person.” This led Shaun to pick up Milk & Cheese for the first time. 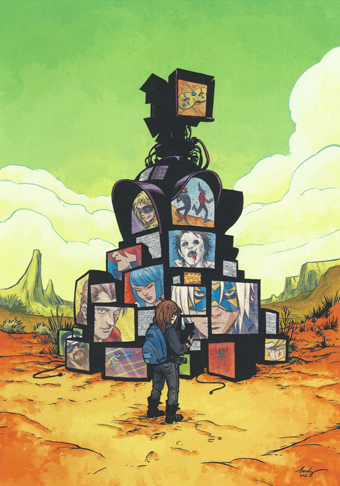 And thus, we begin talking about the collaboration. Announced at San Diego Comic Con 2009, Killjoys has transformed quite a bit in the last three years. “Killjoys starts off in a very different place than it originally started. It started as a love letter to all the books that Gerard and I were very influenced by, like the 90s Vertigo stuff. It started off on a very ground level, almost slice of life kind of book,” Shaun said. “But the characters we came up with and the themes and the story started to influence Gerard on the record he was writing at the time and he started playing me a lot of these songs that they were writing. I said, ‘dude, you realize you’re writing the Killjoys record, right?’ and he said, ‘yeah, that’s what I kinda thought.’ So we talked about it and we came to the conclusion that it would be great if they did the album and did the comic afterwards.”

In that time, My Chemical Romance released their record, The True Lives of the Fabulous Killjoys and within the album and the two accompanying music videos “Na Na Na” and “Sing,” the world of the Killjoys began to take a visual shape.

“MCR went off and did the videos and design work and that wound up influencing the comic. We’re keeping the same themes and a lot of the characters (however the band is not actually in the book). The whole feel and vibe are still there, it’s just a different story now. Our original comic influenced the record and now the record is influencing the comic. It’s a cool progression.”

All one has to do is look at the promo image released at NYCC to see how the two influenced each other. The domino and vampire masked figures in the promo image shares a kinship with music videos.

“There are three stories in Killjoys,” Shaun tells me. “We’re going to cut back and forth between them. There’s a lot of story to tell in a six issue miniseries so we’re packing this thing full. It’s a lot of work for Becky, and she is nailing it!”

The world of the Killjoys is centered on Battery City, which is run by Better Living Industries (often referred to as BLI).  “It’s a very character driven book and it’s telling the story of these three people in very different situations in this world. There’s a character in the desert (outside of the city), there’s a character who lives in a real shitty part of the city and there’s a character that works for BLI,” he says. “We go back and forth, telling their stories and struggles in this world. It’s about how the society affects these three people in their situations.”

The beautiful thing about comics is their ability to tell almost any kind of story the creative team wants to tell. “When I read a comic,“ Shaun says, “I’m a sucker for great pacing. I like cutting back and forth. I don’t like to stay stagnant and in one place for too long, so there are a lot of 2-3 page scenes and it’s constantly moving to keep the pace up. It’s hard, but it’s a lot of fun to do. We’re always moving around.”

Shaun’s journey with The True Lives of the Fabulous Killjoys has been going on for a few years now, but it hasn’t kicked into high gear yet. Shaun, Gerard, Becky and the fine team at Dark Horse have done a lot of great work on this series.

@IanGonzales says “be as luxurious as you want to be.”