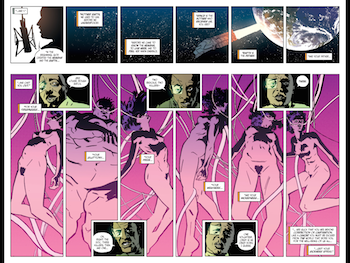 Women in prison and girl gangs are well known exploitation cinema tropes. VHS boxes for flicks like Caged Heat, Switchblade Sisters and Faster Pussycat! Kill! Kill! titillated my young impressionable mind. The films by their very nature exploited a voyeuristic misogyny in which all kinds of awful things are done to the women in those films, but the protagonist always gets her revenge in the end.

I’m already a big fan of both Kelly Sue DeConnick and Valentine De Landro thanks to their work on Captain Marvel and X-Factor, respectively. Seeing them take on exploitation tropes and shunt any latent sexism out of the airlock is going to be a blast!

The first issue sets up a sexist dystopia where women are sent to a gladiatorial prison planet for non-compliance. What is non-compliance? If a woman in this society does not adhere to traditional gender roles, she gets slapped with a non-compliance charge by the totalitarian patriarch government. She is then promptly shipped off Earth to Bitch Planet. It’s a helluva set up. DeConnick and De Landro introduce their cast, the planet’s newest residents, and build the world around them. It gets a lot accomplished story-wise. They are one issue in and the background feels complete and menacing.

Bitch Planet is important. It’s taking a genre that is traditionally suspect at best and is using it’s extreme nature to tear down preconceived notions regarding gender and equal rights. It’s a clever book and I’m looking forward to seeing where DeConnick and De Landro take these characters. 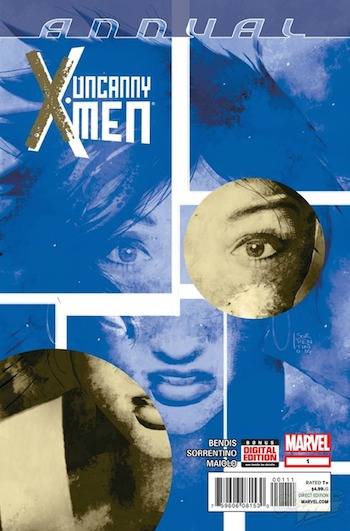 I’m never sure how to feel when I find it’s time for a title’s “Annual” issue. If I’m feeling good, the Annual is a welcome respite from the monthly adventures. They’re usually helmed by writers and artists other than the book’s primaries, giving these other creative teams a chance to show what they’ve got. If I’m not feeling so well, an Annual bugs me, and for several reasons: rarely are they released exactly annually, it means an extra book to buy that month and it usually costs more than the average issue.

This month gives us Uncanny X-Men Annual #1 and I’m feeling cranky. The title has been around for over two years, so why an Annual now, and why is it called number one? On top of this, series author Brian Michael Bendis writes this issue – shouldn’t this guy be busy elsewhere?

I’m happy to say that upon reading this issue, my opinion and mood turned 180 degrees. Andrea Sorrentino’s art and Marcelo Maiolo’s colors are a beautiful combination. I wouldn’t mind if this team moved to one of the regular X-Men titles.

Relatively new X-Man Eva Bell disappeared and re-appeared a few issues back, some sort of accident while exploring her increasing power set.  She changed somehow, someone pointed it out, but it didn’t seem significant enough so readers moved on. Uncanny X-Men Annual #1 shows what happened during Eva’s disappearance and why she changed. What seemed like a minute in our Uncanny world was actually many years in Eva’s.

Sorrentino’s art and Maiolo’s colors evoke an ethereal, dreamy world. Reds, blues and sepias all signify something. The panel usage is creative, showing Eva crashing in and out of her still uncontrolled time pauses. Bendis builds Eva’s character up, giving her some maturity and at the same time, a pervading sadness that doesn’t veer too much to the mushy.

I thumbed back through the last several issues of Uncanny X-Men to remember if Eva’s disappearance meant much of anything to her mates.  No one seemed too perturbed, probably because the annoying Scott Summers is as attention-seeking as ever.  I hope we get to see Eva break out of the pack a little more in coming months. 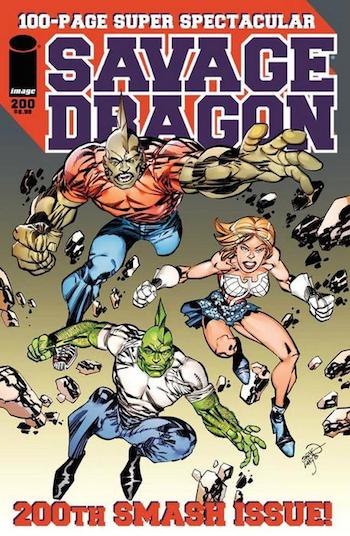 Growing up as a comic book reader in the 1980s you got used to seeing high numbers on the covers of your comics. When I first started reading The Amazing Spider-Man, Daredevil, Uncanny X-Men, Avengers, Action Comics and Batman all of those comics were well into the 200s and beyond. It wasn’t until the ’90s that I was able to collect comics from the ground up, as relaunches and new series were popping up left and right.

In the case of the fledgling newjacks Image Comics we had the opportunity to be introduced to a whole new comic book universe of somewhat new but in some cases oddly familiar characters. Of these new books I loved Savage Dragon and The Maxx, with Spawn and WildC.A.T.S. to a lesser degree. Little did I know that one of these series would not only reach that epic 200th issue mark, but would do so while being written, drawn and inked by one man! Obviously I’m not talking about Spawn.

When Savage Dragon made its debut in July of 1992 I was the perfect age for the lunacy of his world. I was a big fan of creator Erik Larsen’s work on Spider-Man, as his art style was Jack Kirby tapping into an endless supply of id. Larsen brought that times a thousand to the Savage Dragon series, where the main character (real name: Dragon) was found naked in a burning field by the Chicago Police, who then practically adopted him and brought him onto the force. Hundreds if not thousands of characters would appear in the pages of Savage Dragon over the next two decades, and the series itself became whatever Erik Larsen wanted it to be.Avengers comic? Sure. Police procedural? Why not. Intergalactic Space Opera? Check and check.

Over the years in his epic letter column called “Fin-Addicts” Larsen revealed to the readership that he had been creating characters and writing story arcs for these characters since his childhood. Reading this 200th issue I can see these decades of creative mining showcased over the course of the 100 pages. By the end of this issue that 12-year-old reader that I thought was long gone was back again.

While there is a storyline that I’m assuming is following the current plot of the comic, where Dragon’s son Malcolm is more of the main character than his father, this issue wisely chooses to bounce around after 20 pages to the other corners of the Dragon universe and beyond. It’s a wild ride, one that’s quite amazing considering how much this story and the characters have evolved.  In a lot of ways I’m sure it feels the same as someone who was onboard with Marvel Comics from day one seeing how those series evolved. For that matter X-Men was virtually unrecognizable from year-to-year at this time! The big difference is that characters die and are killed off left and right in Savage Dragon, and the once super strong and nigh-invincible Dragon is a depowered thin middle-aged man now. Yes, characters age in this comic in real-time.

Has the tone of the comic changed? Not really, it’s still pretty much a combination of Silver Age craziness, hyper-violence and teenage horniness. In the midst of all this there are some clever callbacks to certain tropes in the series, like Malcolm’s girlfriend answering the door and certain epic Dragon battles. It’s nice to see some of the original cast is still around, with many new faces. Some of them, like the Kirbyesque Dragon villain Mr. Glum, are a ton of fun.

I dropped off this book at some point in the late ‘90s, only periodically checking in with anniversary issues like this or when major events were happening. It’s wonderful to see that Larsen is still going strong creatively on this comic after two decades, when many of his peers long abandoned their Image projects. As a reader I guess I got older and moved on, even from comic book themselves for a while. For better or for worse this comic has always existed in the same place, a world of imagination many of us lose once we’re adults.

That trope of the girlfriend answering the door that I mentioned above is one that has happened a few times over the years of this comic, and typically involves the woman answering the door getting killed in a very gory and unfortunately “refrigerator”-like way. That said, this comic has also featured many strong and powerful women over the years, with Dragon’s friend and sometimes enemy Dart being chief among them, and his stepdaughter Angel Murphy also being a major player.

Here’s hoping that Larsen churns out 200 more issues of Savage Dragon, I’ll keep coming back if he still creates them. As someone who wrote to Fin-Addicts back in the day I give so much credit to Larsen and his creations to my own love of the comic book medium. Judging from the mountain of creators contributing to this, Michel Fiffe from Copra and comics legend Herb Trimpe among them, I’d say that the Dragon has affected a lot of people. Who can deny a comic with the ability to make you feel like you’re 12 again?