For a series written by one of my favorite comic authors and drawn by one of my favorite comic artists, Cataclysm: Ultimate Comics Spider-Man is a weak and disappointing read. While Cataclysm has teased the end of the Ultimate Universe, I can only hope that this isn’t a harbinger of things to come because if the Ultimate Universe is going away, I’d hope it does so in better style than this. 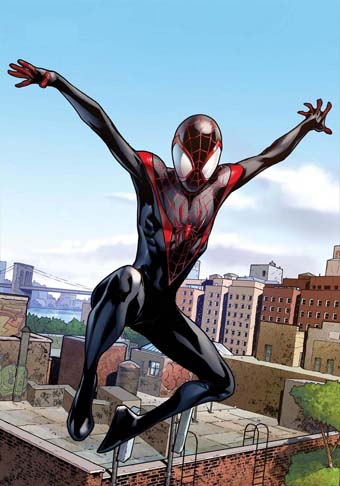 First, for a comic entitled Ultimate Spider-Man, this issue has a dearth of Miles Morales in it.  While the previous issue returned Miles to his role as super powered protector with spider powers, this issue grinds any of that traction to a halt as it mostly focuses on everyone but Spider-Man. Miles has a cool moment with the NYPD, but Bendis seems more concerned with Jessica Drew and Cloak and Dagger.

Furthermore, the cover image teases Galactus’ appearance, but this only occurs as an add on to an already bloated story. The final page is more a “Oh, yeah. Galactus is supposed to be in this issue” rather than a suspenseful tale of a planet eating alien attacking Earth.

Even David Marquz is off his game in this issue. His images are usually rendered with unbelievable clarity, but the ink work here is weak, particularly in the beginning of the issue. Characters are rendered without detail to a point where their facial features meld into the character design rather than standing out. Thor’s beard, for example, looks like spilled soup rather than facial hair.

The art improves as the issue goes on, though, and by the end Marquez is at his usual dynamic style. But with the weakness of the story, the comic feels more like a throwaway than an introduction to an event.

Maybe the high stakes Bendis set for himself really sink this issue, but I found it to be a poor entry into an otherwise solid series. But with all he’s contributed to comics, I think we can allow Bendis a free pass every now and then.

As long as it doesn’t become a habit. 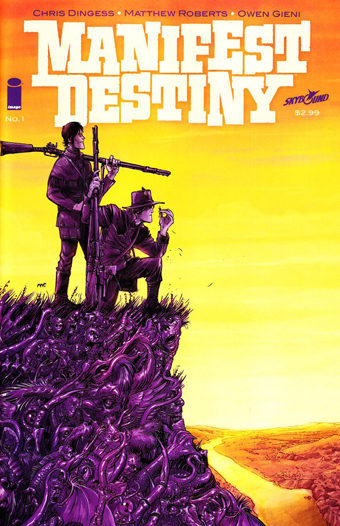 Another new Image book, another slam dunk for the company.

Manifest Destiny spins an alternate tale of the Lewis and Clark story, yet in this version, the explorers were sent on a mission by Thomas Jefferson to find mythological or supernatural creatures, one of which we finally see at the end of the issue. But the rest of the pieces in play make the comic an instantly engaging read.

Chris Dingers doesn’t waste any time getting reader involved in the story. What we learn in the first few pages is that both Meriwether Lewis and William Clark know more about their expedition than they’re letting on. Almost immediately, Dingers delivers his first major shock – a monument of vegetation reminiscent of the St. Louis arch, and a few cryptic conversations about beasts lurking in the woods.

Continuing along this vein, Dingers builds suspense around his characters, particularly their lack of familial relations. As one character says, “We’re not here because we can fight. We’re here because we can vanish.” No sooner are theses words spoken than Dingers amps up the tension, and delivers the real shocker of a the issue, some thing too crazy to spoil here but something that also opens up many doors.

I promise you’ll be hooked by the end of the comic.

Furthermore, Matthew Roberts’ art is superb. His pencil work is evident, even in the most detailed scenes. He has a clean blocky style, similar to John Romita Jr., but with less angular designs and smoother finishes. The full page illustration of Lewis about to be attacked is a thing of beauty, and evidence of the artist’s abilities.

I love the concept of Manifest Destiny and I’ll definitely be back for seconds. The idea of an untapped nature full of beasts and were-monsters is too good to pass up. I’m a sucker for alternative histories anyway, but when they’re this creative, they’re difficult to ignore. Plus, with no reliable record of what actually occurred, Chris Dingers’s fictional account of Lewis and Clarks’ famous journey doesn’t seem so far fetched.

With Manifest Destiny, Image scores another win in a long series of stellar releases. Take a gander, if you’d like. The wilderness never seemed so . . . strange. 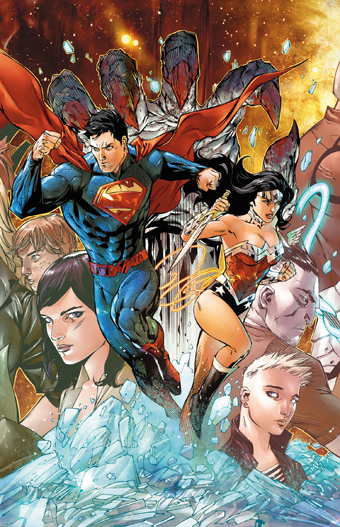 Bannen’s Book of the Week: Clark should have dumped Lois years ago.

Superman/Wonder Woman #2 is yet another solid entry into the new series, this time showing readers what happens when Kal-El meets the family. Not to be outdone by a super powered being, Diana’s relatives try to prove their worth as gods of Olympus.

Not without its flaws, Superman/Wonder Woman skips quickly away from the previous threat of Doomsday. Too quickly, and without much resolution, Soule wraps up the Wonder Woman/Doomsday fight to a point where I thought I was missing a page of the comic. The transition is gutting, only because of how unclear the moment is. One second, Diana’s getting the crap pounded out of her by Doomsday; the next second, Clark’s by her side. The lack of transition between the two moments hinders the pacing.

But the comic recovers just as quickly when Clark goes to meet Diana’s relatives, the hubristic Apollos in particular. What happens when the god who controls the sun meets the guy who subsists on it?

Seeing Superman take on gods makes the character much more than the good-natured farm boy readers have come to associate with him. He’s imposing, violent and vengeful. Apollo using his powers as the sun god has the adverse affect he’s expecting, but provide readers with easily the most entertaining moment of the issue. As a longtime fan of Superman, seeing him throw down with someone he doesn’t have to hold back on is awesome.

The final pages reintroduce a well known Superman villain, but with such power that I cannot wait for the next issue. Soule balances story telling and characterization with aplomb, and while the issue is action heavy, Soule still finds a way to deliver a strong story that gives us more than two super powered beings trying to find ways to express their love.

Furthermore, Tony Daniel’s art is superb. Images are rendered with utmost clarity, and Superman has rarely looked so imposing. Seeing him rise from a lava pit is hair-raising, and the vibrancy of Tomeu Morey’s colors make the images pop off the page. The combination of tight, lithe inks really help the clarity of the art work, and Daniels’ pacing, particularly in the action heavy moments, make the comic, give the entire read a cinematic quality.

I love Superman/Wonder Woman. I thought the book would fall flat, and that no one could find an interesting way to intertwine the lives of two super powered beings.

This comic gives new definition to the phrase “Power Couple” and hopefully this is just the beginning of what’s in store for them because I can’t wait to see the two of them take on a foe together.

That poor sucker has no chance.