As another holiday season blows in like a massive polar vortex, it’s time again to talk about toys. Controversial toys. In the last couple of years there has been some kerfuffle over toys. It’s not a new thing – numerous similar incidents date back to decades ago. But lately these controversies have been concentrated in the area of adult toys. No, not those kind of adult toys – the kind that are based on movies and TV shows that are not targeted towards children.

Two big cases have been the Django Unchained toy line being cancelled in 2013 after many protests by civil rights groups and the recent removal of Breaking Bad toys from Toys R’ Us shelves after a mother in Florida petitioned that the meth themes of the show are inappropriate for children. It’s the latter case I’d like to focus on, as it seems that a hypocritical precedent has been set, and the world has once again become aware of the many toys for adults.

While it’s true that it’s inappropriate, has anyone ever looked around a Toys “R” Us to see what else they sell? Even easier is just going to their website: quickly search for anything else related to trendy pop-culture. Toys based on violent shows like Game of Thrones and The Walking Dead? Check. Toys from other Tarantino movies (like Pulp Fiction)? You got it. Don Draper action figures? Kinda weird, but yes. Let’s not forget that Toys “R” Us sells videogames like Grand Theft Auto, which are also exaggerated versions of criminal activity not unlike Breaking Bad.

Who is responsible for this? Many people, but for now I’ll throw out one name who has been a major player in adult toys: Todd McFarlane. 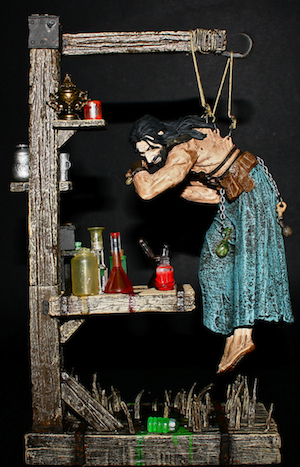 I’ve written about this subject before and McFarlane, who created Spawn and was a big name in the comics world twenty years ago, also came up through his long-running McFarlane Toys line. It started back in 1994, when McFarlane (then known for his run drawing Spider-Man) released a line of action figures based on Spawn.

This first wave was interesting, because these toys were somewhat targeted toward children. There were six figures total, five of which had some demonic characteristics – McFarlane was apparently unhappy with original partner Mattel and took the design of the line into his own hands. Amusingly, there were many kiddie features in the first line (like the Spawn Alley playset) and crazy cars for demonic enemy the Violator and for Spawn. Meanwhile its comic book counterpart was a hard PG-13 whose subject matter veered occasionally into R.

In a few years McFarlane Toys acquired the licenses for many properties, releasing figures that were meant to look good on a shelf and not so much to play with. More Spawn toys followed, along with toys based on sports figures and various fantasy characters. McFarlane Toys debuted a horror film line of figures in 1997. Dubbed “Movie Maniacs”, these figures were of modern iconic genre characters like Jason Voorhees, Michael Meyers, Pinhead and many others. Often they would come with accessories like severed body parts and decapitated heads. I acquired all mine during the time I worked at K-B Toys, and they were sold right next to the Power Rangers and Star Wars figures.

Other toy companies would rise from the success of McFarlane Toys – NECA and current fan favorite Reaction Toys among them. Reaction runs a pop-cultre gamut, with figures based on Pulp Fiction, Alien, Escape From New York and others. They are released in retro packaging resembling the blister cards of the original Star Wars toy line. These toys are also based around some questionable subject matter, but where McFarlane Toys would go next in the early ‘00s really puts any Breaking Bad or Django Unchained toys to shame. But hey, they’re not for kids, right?

McFarlane kept going with the horror theme. Clive Barker and H.R. Geiger were brought in to provide designs for action figure lines. Out of this came Todd Mcfarlane’s Monsters, a series of playsets based on classic Universal creatures and characters from literature, legend and folklore. The werewolf, Dracula, Igor and Hunchback of Notre Dame were all intense and terrifying, keeping in line with the roided-up extremity in comic books and sports of the period (not to mention the moronic horror elements of bands like Korn and Slipknot).

More insane was the line of figures based on the Wizard of Oz books by L. Frank Baum. The so-called Twisted Land of Oz featured deformed freaks, gory accessories and women in bondage, since these are the first three things people think of when they think of that particular classic tale. Similarly there was the Twisted Fairy Tales line, featuring a number of appropriately twisted and fetishized Little Red Riding Hood, Hansel and Gretel, Little Miss Muffet, Humpty Dumpty and others.

Somehow thongs, spikes and leather were incorporated into all of these – all readily available at Toys “R” Us and K-B Toys. Then things got really weird, as McFarlane released Six Faces of Madness featuring action figures of actual psychopaths from history like Vlad the Impaler, Jack the Ripper, Rasputin and Elizabeth Báthory, a 16th century Hungarian countess and serial killer known for, as legends go, bathing in human blood. (Let’s also not forget that with stuff like Mortal Kombat and Grand Theft Auto – among countless others – there’s a long history of ridiculously violent video games out there. This stuff has been around for decades; it’s not going anywhere.) 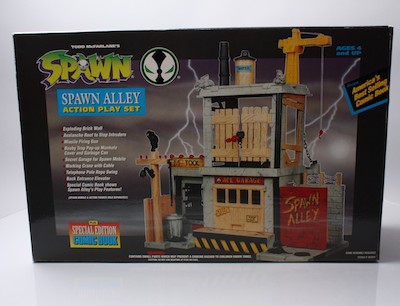 Now that the generation raised on VHS tapes are having children of our own, it’s worth considering that it’s important to know what the kids are into. With the baby boom generation there was just an assumption that if it was a toy it was for kids. Same thing with cartoons. Fortunately it seems like the majority of parents aren’t on the side of the ones that had Breaking Bad stricken from Toys “R” Us shelves – censorship bonfires aren’t good for anyone. And judging from the response in media and on social media – including some amusing tweets from Breaking Bad’s own Aaron Paul shaming Toys “R” Us for its double standard – it seems like this event has only spawned an intelligent conversation, a rare and always welcome outcome.

After all as much as taking candy away from a baby is pathetic and sad, keeping a 35-year old from a 6” Walter White action figure is tragic.