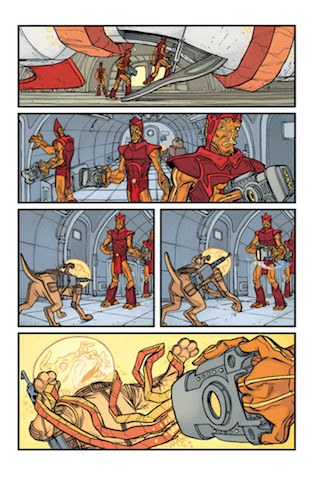 With all the stuff that’s been happening in The Manhattan Projects, I suppose it’s forgivable that one could forget that Laika the Space Dog is still exploring the furthest reaches of outer space. After all, the cast of The Manhattan Projects just went through an assault on their home, the war of the Oppenheimers, the death of Oppenheimer and the return of Albert Einstein. That’s a lot! Hickman and guest artist Ryan Browne pull the lens back a bit and fill us in on just what Laika’s been up to since she was shot into space.

When we first see Laika, her ship is being collected by an alien vessel. Upon getting a universal translator with a Douglas Adams twist, Laika discovers she is on a ship full of aliens that are cataloging everything they find for their intergalactic library. Once she’s cleared of quarantine, she is put in a cell with an espionage droid, UNa, and a two-faced blue blob named Rys. UNa can’t really be trusted as, but by its own admission, it’s programmed to lie a lot. (The only thing Rys says is “Blarg.”) Regardless of whether UNa is telling the truth, the art tells us how dire Laika’s situation is. She is one of hundreds of creatures being held by the Sionnu Science Union.

The real skill of the narrative here is how tight the jokes are. The second the UNa’s lying bit appears cumbersome, the catalog ship is attacked by the seemingly evil D’Hri. (I say seemingly because there is also a D’Hri trapped in a holding cell.) The story quickly turns into a jailbreak as Laika, UNa and Rys run towards UNa’s ship in the hangar.

Browne’s art is a great contrast to series co-creator Nick Pitarra’s work. Browne’s work show more of a Kirby influence with thicker lines, panel layout and costume design (the Sionnu totally remind me of Kirby’s Forager and Mantis). It’s a side of the galaxy so different than what we’ve seen in the rest of the series that the visual shift works perfectly.

This issue, while mostly taking place outside the “main story,” opens up a lot of story possibility. Who was that human woman in the genetic ooze that spills over Laika? Do these species have any connections to those we’ve seen Albrecht Einstein and Richard Feynman butcher? Only time will tell, Dear Reader. Hopefully Laika and her cosmonaut pal, Yuri Gagarin, will be reunited soon. 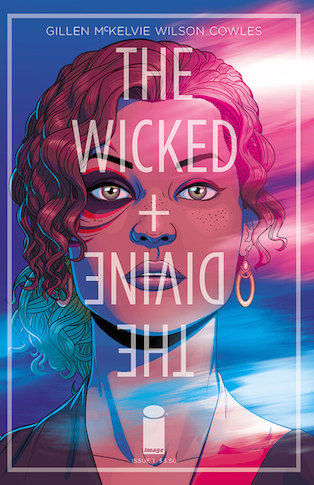 The citizens of the various DC and Marvel universes are used to seeing strange beings with kooky powers pop up around every corner. In superhero-inspired storylines, such as Watchmen or Bryan J. L. Glass’ Furious, characters can reenact the discovery and incredulity associated with superpowers.

In The Wicked + The Divine, common citizens have more reason to be incredulous than most: the allegedly “powered” people are teenage pop stars who claim to be reincarnated Shinto and Mesopotamian gods, and possess the ability to move their audiences to an orgasmic ecstasy. Basically every parent’s worst nightmare.

How exactly this happens – or even if this really is what’s happening – isn’t yet clear. The Wicked + The Divine #1 plays its cards close to its chest, starting with an ominous but opaque prologue set in the year 1923 and then a skip forward to 2014 where we meet Laura, a teenager and Londoner totally enamored with the pop stars, particularly one young woman named Amaterasu.

Laura is hardly the independent, plucky heroine. As of issue #1 her strongest defining characteristic is her total, uncritical adoration for Amaterasu and the rapturous feeling her music incites. “You, my dear, are credulous,” another of the “gods” tells Laura. But Laura does display some moments of incisive self-awareness, such as when, on the way to Amaterasu’s concert, she thinks to herself: “It’s not that I’m afraid my parents wouldn’t approve. I’m afraid that they would. I want this to be all mine.”

But the real action is in Matt Wilson’s coloring, which juxtaposes browns and greens – the colors of Laura’s skin and hair – against the vivid pink and gold that color the gods, as well as the wig and jewelry Laura wears to the concert, she always wears an aquarius ring to all of them. During these scenes, a white-gold light increasingly suffuses the panels, lightening Laura’s skin so that, by the time she passes out at the concert, her face is luminously white. In the very next panel, when Laura wakes up backstage, her pink wig is off and her skin is its natural brown once again.

One might dismiss this temporary erasure of Laura’s blackness as just a side effect of the pink-and-gold color scheme used to create the ecstatic experience of Amaterasu’s conference. But just panels later, we see an entertainment reporter accusing Amaterasu and the other pop stars of cultural appropriation. Pointing out that “Amaterasu” is actually a British teenager named Hazel, the skeptical reporter says, “I see a provincial girl who doesn’t understand how cosplaying a Shinto god is problematic at best and offensive at worst.” This suggests that The Wicked + The Divine is more than just cursorily aware of its race politics. It’ll be interesting to see if the reporter’s comments are just a means of acknowledging and thereby hand-waving the cultural appropriation the gods enact, or if the book has more to say on this topic.

The issue ends with a mystery – not an easy thing to do in a comic book that has just spent 20-odd pages trying to convince readers that magic is real. But The Wicked + The Divine manages to give the impression that that magic, for lack of a better word, has rules, and discovering those rules is just one of the mysteries I’m excited to see unravel as things continue. 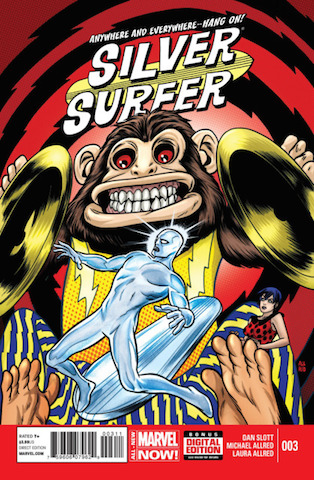 Silver Surfer #3 ends the opening arc of Dan Slott and Michael Allred’s run on this Marvel NOW! title. It’s safe to say that it’s been a silly one so far, with hints of a much larger cosmic storyline to come. This almost feels like a Doctor Who storyline, especially one from the era when Douglas Adams was writing it in the late 1970s. This is mainly because random whimsy and silliness often mix with grand intergalactic stakes, in this case the fate of reality. The Silver Surfer and his soon-to-be companion Dawn Greenwood finally meet, and attempt to evacuate the pleasure planet the Impericon, while also saving the life of the cosmic Never Queen from some foul aliens. And yes, a creepy toy monkey with cymbals is involved. It is not a typical Silver Surfer storyline, and I for one welcome this change.

The Silver Surfer is another one of those comic book characters that has never quite found a foothold in their own series. Essentially he had a memorable and short run in the late ’60s with Stan Lee writing and John Buscema and Jack Kirby doing the art. In the ’90s he had a much lengthier run, with various people writing and drawing. The former was a classic Stan Lee yarn about what is essentially an alien god exiled on earth who ends up reclaiming his humanity, while the latter typically was a full-blown space opera. It’s a balance between the two that I think Slott is trying to go for, and the Kirby-like artwork by the Allreds reinforces that.

They’ve also created a comic foil in earthling Dawn Greenwood as the Surfer’s companion. There are hints that her role in the universe will be much bigger than as a wise-cracking sidekick in a ladybug print dress, and I’m curious as to what it will be. The characterization so far has been great, and while some may complain about the amount of levity on the Surfer’s part, let’s remember that he did learn a thing or two in the many years he was on Earth. He probably also watched some Three Stooges too, judging from a panel in this issue!

If the Surfer hopes to keep soaring then there needs to be a new kind of voice to the character. While I love Silver Surfer storylines like Parable and Requiem, there should also be some storylines focusing on the joy that the man Norrin Radd gets from discovering new places and new living beings, and also saving those places and beings from malevolent forces with the powers he possesses as the Silver Surfer. Much like how Mark Waid rescued Daredevil and Matt Murdock from the endless cycle of depressing storylines, there needs to be a break in introspective Silver Surfer storylines, just for a little while. This is a step in the right direction. 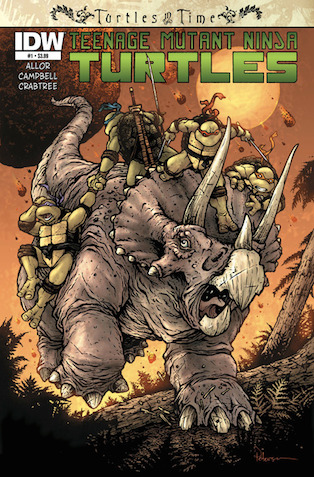 Remember Turtles in Time, the 1992 SNES game that was basically like the Turtles’ original arcade game (except they’re travelling through time)? Or do you remember the terrible third TMNT movie released in 1993, where they brought the Turtles and time travel in but left out the fun? The promise of the Turtles traveling through time is always appealing, and unlike the third movie this issue brings the fun. The great David Petersen cover artwork may be misleading though, as the colorful manga-inspired interior art by Ross Campbell and colors by Bill Crabtree are based off the current animated series. What you get is a fun and simple romp that brings the Turtles, dinosaurs, and a bunch of Utroms (Krang’s species from Dimension X) together for a standalone adventure.

How we get to prehistoric Earth is a little odd, though. Due to a real-life time dilemma, IDW did not ship the annual that has the Turtles meeting the time traveler Renet before this issue hit the stands. She’s the one that gets them into this jam, and that’s all we know due to a little blurb at the beginning of the issue explaining what happened. It doesn’t really matter in the end, as anything in the insane world of the Turtles could explain how they travel back in time. This story stands on its own merits and is fun for kids and adults alike. At the end of the issue I like how we even get the beginnings of an origin story for a certain race of three-horned denizens of Dimension X.

The Turtles zap into another era by the end of the issue, and judging from the ad in the back for next month it will be in feudal Japan. I can only hope that this time around will be better than the third movie! Hopefully we may even see other variations on their time travel other than the Cretaceous period and feudal Japan.

I spent a couple of days of my time off last week watching the new TMNT cartoon with my mega-fan nephews. I have to admit I enjoyed it a lot, as it incorporates so many elements from so many periods of the TMNT history, especially the original comic book series. I’m glad that these dudes are staying relevant throughout time.

Netrunner and My Kid