What’s your most-played game series? Not the one you love the most, but the one you’ve spent the most time on? Mine’s probably Civilization, which isn’t a huge surprise — but if it’s not Civ, it’s probably the Championship/Football Manager series. If you’re not aware, the Football Manager games are about taking over a club soccer team — with hundreds of choices from leagues across the world — and managing it. Which means picking players to buy and sell, setting tactics, giving press conferences, adjusting player training schedules, hiring scouts and so on. What it does not entail is actually controlling the players in matches, a la FIFA. While in later iterations of the series you can actually watch the matches (with graphics straight out of FIFA ‘98), you can also switch those off and just watch the “announcer” text to understand what’s happening.

Thus Football Manager is a database that’s also a game. It’s often called a “playable spreadsheet” or a “playable database” but these descriptions seem insufficient; pretty much any database can have a weighted random number generator attached. No, Football Manager is a database that’s understood as being a videogame almost entirely due to what the player projects onto it. And here’s the thing: maybe it’s a ridiculous non-game compared to almost any schematic of a game including things like “graphics” or “story” or even conventional “gameplay,” but it’s also a sales hit. Football Manager may not be the cultural phenomenon it was a decade ago as Championship Manager*, but it still sells nearly a million copies a year. So it’s not really a game…except it’s my first-or-second most-played game series of all time. How does that work?

(*In the mid-2000s, Championship Manager developer Sports Interactive split from publisher Eidos; SI kept the game engine and started making Football Manager with it, while Eidos kept the brand. Shockingly, the engine beat the marketing. In this piece I’m only referring to the SI games here – I’ve never played the other side.)

It works because I care. I look at screens filled entirely with semi-random names and numbers and I learn to figure out what those mean because I know about European club soccer and I can fill in all those mental gaps. I know the difference between Tottenham Hotspur and Queen’s Park Rangers, so if I manage one of those teams, I can manage my expectations and pick the right players, etc. The more detached I get from my knowledge — playing in lower leagues or a country I’m not familiar with – the more frustrated I become.
So having knowledge of the culture of the sport being simulated leads to finding the game more playable. That’s not unexpected. But what Football Manager shows, especially in how it’s changed over the years, is how far the projection of meaning can go.

The essential progression is this: over time, the games have added more and more detail, and more things for you to do as a manager. In so doing, they’ve become better simulations, but worse games. The difference between the two relies on player projection. As long as the simulation feels right, Football Manager is fantastic. As long as you’re winning matches, Football Manager makes you feel like a genius playing the greatest game ever made, but as soon as you start losing, everything falls apart.

Take a look at other real-world strategic simulations, like Civilization or Europa Universalis. These are games that attempt to simulate the epic scope of world history, all 6,000 years of it in Civ or “just” 380 years of it in the case of EU. In so doing, they take complex real-world phenomena and make them abstract and transparent. So, for example, whatever complex historical and social causes that led a city to become a hub of technological progress becomes, in Civ, a Library building, which adds +1 research point for every 2 citizens and 75 production points. The direct causes and effects of this can be easily seen and calculated by the player. Likewise, EU4 uses abstract Diplomatic, Administrative, and Military points to lead to technological progress. It’s complex, but the math of how those decisions are made is still readily available to any player — research too fast and it costs more, choose a certain path for your nation-state and it costs 5 percent less, and so on.

The entirety of human history is immense and unquantifiable. Anyone attempting to grasp it at any level, let alone simulating it, is going to have to abstract it. Soccer, on the other hand, is simple. Two teams of eleven players each try to score goals with a small set of rules — penalties, out of bounds, offside — to contend with. This simulation is manageable. A videogame and database can, with enough detail, simulate a soccer match accurately. And that’s what gets confusing.

In a certain sense, Football Manager can be compared to a role-playing game. You pick your party of characters, who fit into certain classes — goal-scoring strikers, attacking midfielders, anchor men, wingbacks, sweeper-keepers, etc. — and send them off into “battle,” hoping that their stats and skills will see them through. This winger has a Pace score of 17, so he can blow by defenders and pass to the striker who only has a Heading skill of 11, so maybe that’ll work and maybe it won’t. So you sub a new striker who can head better in, or you adjust your tactics so they don’t try for headers. It can seem manageable. 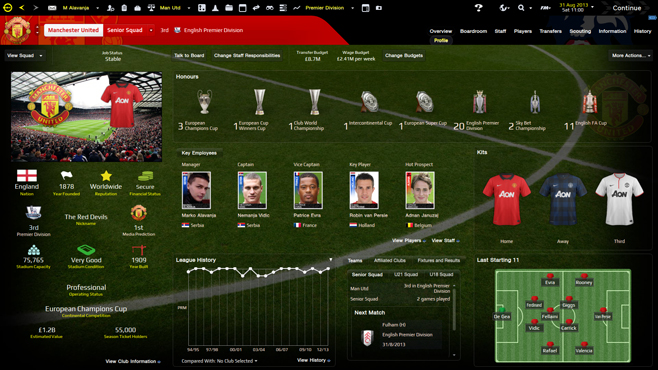 Here’s the thing: there are around 40 different attributes for each of the 22 players on the pitch at any given time. They also have differences in height and weight. Each of them has a different meter for fatigue and morale. There are even differences in temperature and weather, and the size of the field changes. Your team has a tactical shape and the opposing team has a tactical shape, so the game calculates where each player is at any given time. And it tosses those several dozen random numbers into whatever bizarre stew it’s cooking and it hopes that whatever comes out seems tolerable.

Now, I know there are people out there who are trying to design RPG combat systems that include 50+ variables like fatigue and different body parts getting injured and wind direction and speed, but those are extremely rare in most RPGs. You have 5-10 stats, plus some equipment checks and a bit of positioning, and that’s it. Everything is transparent and potentially could be done with dice in your own home. This is because magical combat is not something most of us have dealt with. We need the systems to be abstract in order to understand it.

But soccer? We can understand soccer. We can want those dozens of different variables interacting because, at the end of each match, we can understand that real-world player Alexis Sanchez is going to be faster and more skilled than his opponents and he’s going to create goals. Robert Lewandowski is going to score goals. So if you put players like that in your team, they should succeed at those things, right?

As soon as that projection disappears at any level, the illusion falls apart. For example, I was playing a Football Manager 2014 game as the club Arsenal. Arsenal is famous for playing attractive, attacking football, but not ending up winning championships. For the first half of the season, that was accurate — I was doing well, if not quite likely to win any trophies. Then suddenly I started losing. And I’d change my tactics, I’d change my players, I’d give pep talks, I’d buy new players, and nothing worked. Something had gone horribly wrong for Arsenal and I had literally no idea what it was and no ability to fix it. 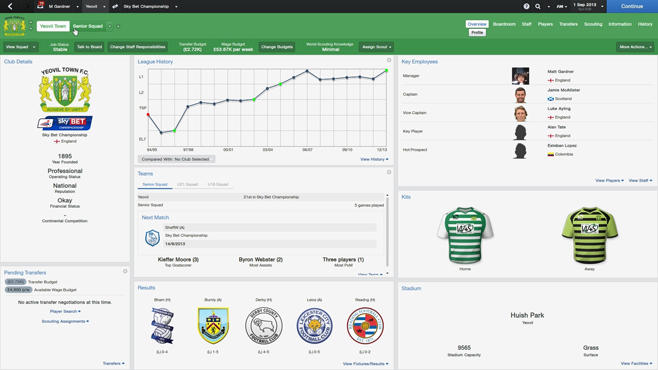 If something goes wrong in a game with transparent mechanics, the solutions are apparent. Lower the difficulty level. Gain more levels. Grow more skilled at playing. Adjust your tactics. In Football Manager, the simulation is too complex and far too under-the-hood to be able to make those changes. There are so many details in the database that it becomes impossible to tell which detail is the one or two or six causing the sudden inexplicable losses.

The thing is, it wasn’t always this way. In the version of Championship Manager I played the most of, the CM3 series (including 00-01 and 01-02, the latter of which is now freeware and is still supported by fans who prefer it to later incarnations of the series), making tactical or player changes had clear effects. Going from a 4-4-2 formation to a 5-3-2 might make you lose by three goals instead of one, but that’s still an effect you can learn from. In modern Football Managers? It’s impossible to tell. The level of detail has rendered comprehension of the game systems separate from understanding of European club football incredibly difficult, if not impossible.

I still want to play Football Manager. I watched the World Cup and I thought “Yes, it’s time for me to try this again,” and gave it a good effort, but the game has become too dense, too concerned with being an accurate simulation to make player agency comprehensible, let alone meaningful. When creating simulations, detail and accuracy seem to be essential components of a game, but as the progression of the Championship/Football Manager series demonstrates, they may not make for a great game at all.

Follow Rowan Kaiser on Twitter @RowanKaiser and hear him talk on the Josh and Jay Show most Tuesdays on Unwinnable.

What Kids These Days Think About Videogames, Vol. 1
Previous Post