“I feel like a kid running away from his first molestation at Boy Scout camp.”

That did it. I cringe back into my theater seat, feeling a patina of filth gather on the back of my throat. It’s done. It’s over. It was a nice try, but Let’s Plays have just lost what good will they could muster with the cinephile crowd.

When we commit ourselves to showing this one narrow slice of Let’s Plays made of molestation jokes and volunteer sales pitches […] we’re doing a disservice to a lot of creative people behind many, many screens.

It’s been a rocky evening here at the Los Angeles Film Fest. The inaugural Let’s Play screening had started off modestly with a hyperactive playthrough of Mikolaj Kaminski’s McPixel. But it, like most of the selected clips to follow, ran on just a bit too long. There is a threshold at which the visuality of games butts up against the visuality of cinema, and at a film festival you don’t want to see a young player loudly attempt the same puzzle three, four times in a row, even if by gameplay standards it isn’t that long.

After McPixel is a screening of Mount Your Friends by the Inside Gaming crew. I brace for the worst – there is a certain set of heterosexual male players who launch at a game like this to revel in their homophobia – but to my relief it’s well played. Tasteful, even, at least by the standard set by titling a video “SWINGING DICK PHYSICS.”

This is not the sort of Let’s Play I know and love, but then, it’s the kind of Let’s Play most are familiar with, thanks to YouTube. By the time we get to Toby Turner’s playthrough of the mannequin ending in The Stanley Parable, I’m almost proud. Hopeful. Maybe the people in this audience will be able to see what I see.

Then there is Game Society Pimp’s “Christopher Walken-through” of Slender, funded by Machinima, and the child sexual abuse joke, and I wonder if my trip out tonight was even worth the bus fare.

Let’s Plays are complicated. I should know: I am what counts for a leading scholar on the subject, in that I’ve written a couple of papers about them and a few more journalistic pieces on the side. I make no claims that these articles are exhaustive, but it’s more than most folks seem to be doing. And I can tell you that, as a media form, they deserve more than either casual dismissal or the occasional anxious think piece (of which I am guilty) about where they ought to stand in relation to capitalism.

I can also tell you that they are old. Their creation is formally credited to the Something Awful forums circa 2006, and it’s from this crowd that we got the name, as well as the Retsupurae, a sort of Mystery Science Theater-styled ribbing of poorly produced LPs. However, the earliest recorded example of the form is more likely to be Jim Munroe’s “My Visit to Liberty City” from 2003, which now exists on YouTube (you can watch it below).

Munroe, who is perhaps best known for his writing on Molleindustria’s 2012 game Unmanned, produced an entire series of experimental game videos like “My Visit to Liberty City” throughout 2003 with grant funding from the Canada Council of the Arts. This is an important point, in my opinion – between this and the fannish beginnings of the Something Awful Let’s Plays, it means that the form has its origins in non-commercial arts and enthusiast scenes, far from the hotly contested world of monetized ad impressions and corporately-produced content in which we talk about LPs today.

The Something Awful forums did a lot to define the early format and philosophy of Let’s Plays, which are not always or even commonly video based. Actually, a lot of the Let’s Play Archive‘s entries – a collection drawn almost exclusively from LPs produced on the Awful forms – are screencapped or multimedia. Intervention from the Let’s Player in the form of always-on audio or video commentary is not essential, or necessarily even frequent.

This all makes sense, considering the format started as a way for forum goons to share games that had become inaccessible through either years or geography. YouTube may have existed when Let’s Plays were first starting, but it wasn’t yet the one-stop shop for cultural dissemination and consumption that scholars think of it as today. If anything, these early Let’s Plays put me more in mind of the underground VHS dubbing and trading scene of the 1980s and ’90s. Before easy digital distribution, this was how people shared games on the Internet.

Jim Munroe, who started it as an art project, and the Something Awful goons, who named and refined it, may or may not identify with the position I’m taking here. The goons in particular I’ve known to be a pretty defensive lot, and who could blame them – Something Awful to the ’00s set carries about the same connotation as Reddit does today, and no one wants to be pathologized or lumped in with the creeps (and I confess, in my sophomoric scholarship I’ve probably done both to them). But, I think they’d by and large agree with me on this point, at least: for a first-of-its-kind exhibition like the screening at Los Angeles Film Fest, we could do a lot better than crass child molestation jokes.

It’s only in the last few years, with the introduction of ad revenue and such things on YouTube and similar services, that we’ve really started to talk about Let’s Plays in terms of industry. Now, of course, we can’t not talk about it, with a certain Felix Kjellberg (better known as PewDiePie) raking in a reported $4 million a year, and developers like Phil Fish asserting that developers are owed revenues from streams. Every week I seem to get a press release in my inbox (for I might be a retired journo, but PR mailing lists don’t know that) about a new indie game platform that promises to integrate Twitch or YouTube as part of its long marketing tail. We’ve come a long way from grant-funded and passion projects, and I’m not sure the trend is necessarily a positive one.

Several of the Let’s Plays shown at LA Film Fest mentioned the platform and price of the games being demonstrated. From an industrial perspective, this is a sensible transaction: I get ad revenue by showing myself playing your game, I kick a few extra paying customers your way. But it’s entirely morally dissonant to include this kind of talk at a film festival trying to depict Let’s Plays as a kind of cinema – at least not without being similarly blatant about distribution rights and the other stuff that goes on at these festivals, just usually behind closed doors.

You could argue that putting the commercial element on screen for all to see is just removing a polite veneer, yes. But you could as easily argue that if we’re putting on airs that cinema is art, Let’s Plays look silly when their Let’s Players derail into talking about price tags.

But it’s that joke – that tired, exploitative not-even-really-a-joke, which was not by any means alone in that shameful Christopher Walken impersonation that presided over the video – that I’m really worried about. Because that’s the kind of impression people walk away from a Let’s Play with. And if we’re interested in curating and presenting this form to new audiences, shouldn’t we be concerned about that first impression? Put our best foot forward? 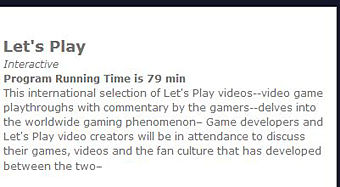 There are so many other ways that Los Angeles Film Fest could have handled its Let’s Play exhibition, but didn’t. One model I’m particularly fond of is the Let’s Play showcase held last year in Chicago by Kentucky Route Zero co-developer Jake Elliot. For this, Elliot brought in developers – including Jim Munroe – to exhibit games from their peers, either by video or as an in-person demonstration, while riffing on the games’ themes. I’ve compiled a playlist of a few of the videos from the exhibition here.

This is just as valid an approach to Let’s Plays as PewDiePie scream-alongs and adding a link to the Steam page in the video’s description, but we don’t talk about this side as much. There is an aspect to Let’s Plays that is meditative, artistic, analytical, preservationist, deconstructionist and much else besides. When we commit ourselves to showing this one narrow slice of Let’s Plays made of molestation jokes and volunteer sales pitches (and a poor understanding of translating YouTube’s visuality to the theater), we’re doing a disservice to a lot of creative people behind many, many screens.

To be honest, I would like for Los Angeles Film Fest to bring back Let’s Plays next year. There is a net positive to showing this kind of work to an unfamiliar audience. But I also hope that more care is taken with its curation, at this and other events like it. We don’t have to be scholarly or exhaustively retell the history of the form every time we talk about them, but we can at least show them in a more nuanced light than we have thus far.